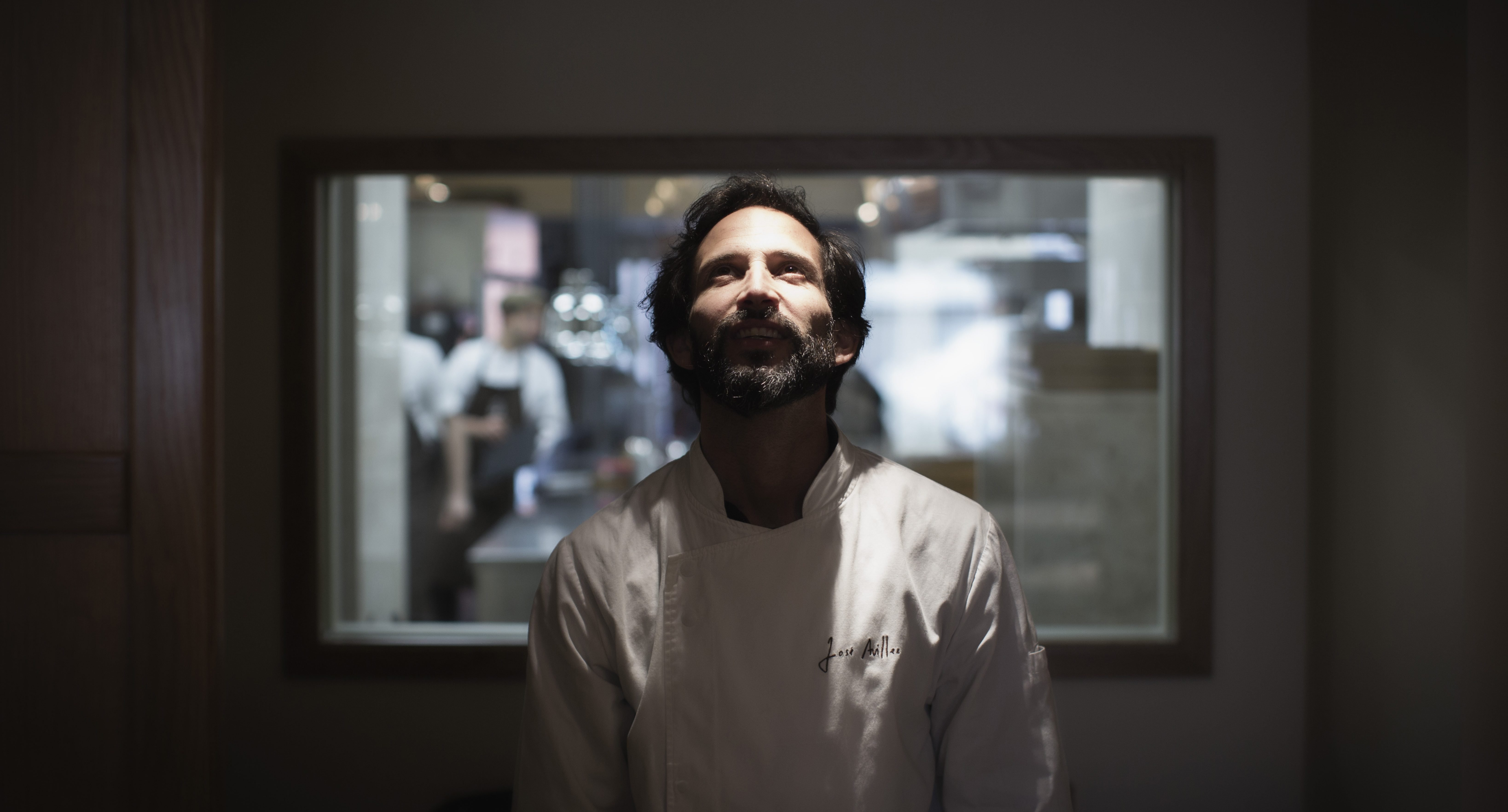 José Avillez isn't slowing down his quest to maintain his reign as the king of cuisine in Lisbon (and Portugal). Here's what we found out about what makes him tick.

These days it’s hard to turn a corner in Lisbon without bumping into his face on the cover of a magazine, his name emblazoned on a billboard, or the wafting aromas of his dishes beckoning you into one of his many restaurants. But José Avillez isn’t showing any signs of slowing down his quest to maintain his reign as the king of cuisine in Portugal: be it Portuguese dishes, Middle-eastern grab’n go, Peruvian partnerships, or even mini explosions inside your martini. We asked this restaurant mogul what makes him tick, and here’s what we found out.

We all have our “local place” for certain dishes— where do you go for your favorite Portuguese staples? The restaurants I would recommend aren’t exactly hidden or unknown but they serve some of my favorites:

Taberna da Rua das Flores is a small and informal restaurant that serves traditional Portuguese food recreating the spirit of an old Portuguese tavern. The menu is written on a chalkboard because it changes so frequently.

For a late snack after going to the theatre, I love to stop and sit at the counter at Gambrinus. Ask for the beef croquettes.

My restaurant Café Lisboa is all about traditional Portuguese flavors. Here we serve an amazing bacalhau à brás, pastéis Lisboa (irresistible crumbly savory pastries named after the city of Lisbon) and pastéis de Nata, delicious custard tarts, served warm, made according to my recipe.

In Lisbon I have two restaurants inspired by traditional tascas: Taberna, at Bairro do Avillez, and Tasca Chic, at the Gourmet Experience in El Corte Inglés Department Store.

At Taberna at Bairro do Avillez, we serve the best traditional flavors with a twist. We have the best beef croquettes, a spicy horse mackerel cone, fantastic beef and suckling pig sandwiches, the best charcuterie, and many other eye-popping dishes in an amazing venue in the Chiado neighborhood.

Tasca Chic is a sophisticated and contemporary tasca. Here we have Portuguese cuisine served at the traditional tascas, with all its flavor and authenticity in a vibrantly cosmopolitan atmosphere.

What are the biggest benefits of being a restauranteur in Lisbon? I think Lisbon is one of Europe’s more distinctive cities. The last 15 to 20 years have built a contemporary Lisbon. Some investments were made to present Lisbon as a multicultural European capital and the urban environment was transformed. There are significant signs of modernization but the historic charm has been preserved.

Lisbon is a seductively stylish revitalized city and is a great destination for food lovers. We have very high-quality products: wine, cheese, olive oil, meat, fish, and seafood, and Portuguese cuisine is tremendously rich and varied. For me, the top ingredients are fresh fish and shellfish from the Portuguese coast. I do think our fish is the world’s best.

Most people learn to cook from their grandmothers or mothers. Who was it for you? What was the first thing you learned how to make when you were young? As I look back, I have always had a passion for food, since I was a child. Actually, it was a passion for eating. My first cooking hero was Laura, my parents’ cook — she was wonderful. I started cooking at home when I was seven. I used to bake with my sister and we sold the cakes to family, friends, and neighbors. We didn’t measure the ingredients but the cakes came out fine.

The first bacalhau à brás that I prepared (I was 13 or 14 at the time) didn’t quite match what I expected, but I didn’t rest until I had perfected the technique. Over the years, I have been perfecting the recipe and today I serve my bacalhau à brás recipe at Café Lisboa. It’s served with “explosive” olives, a sifting of olive juice that I learned to prepare at El Bulli.

Is there a dish originally made by your cook that you still can’t beat despite all your training? Laura was very important, she introduced me to great recipes of traditional Portuguese cuisine. It’s all kept in my taste memory. The memories we have related to our childhood are unbeatable not because of the flavors but because they’re filled with love.

How many restaurants do you now have? What are the newest ones? At the moment, I have 17 restaurants, each with a different concept, but all expressing my passion for cuisine. Since the beginning of 2018, I have opened three restaurants in Lisbon: Pitaria, Cantina Zé Avillez, Cantinho do Avillez at Parque das Nações), and one in Porto (Mini Bar).

Pitaria is a completely different concept from the restaurants I’ve created so far. It’s associated with a very urban concept of “grab ‘n go.” Here, people will find Middle Eastern flavors served in a simple and well-prepared manner, in an atmosphere full of good energy, good music, and good vibes.

Cantina Zé Avillez is a contemporary canteen, friendly and bright, in Campo das Cebolas, where we offer the best and most traditional Portuguese dishes.

At Cantinho do Avillez in Parque das Nações, we serve the best contemporary Portuguese cuisine influenced by my travels abroad in a friendly atmosphere, with a view to the Tagus river.

Mini Bar in Porto is a place that offers surprising gastronomic creations and a sophisticated, clandestine, and luxurious setting. Dishes are served in small portions and live off of surprise, just like in Lisbon’s Mini Bar.

What do you like most about the way Lisbon’s dining scene has changed in the past five years? The restaurants’ dynamism is especially rising in Lisbon. There are new openings every week. Ten years ago that didn’t happen. You would find very good traditional cuisine, but in terms of modern cuisine, you wouldn’t have the choice you have today. Most restaurants (there were exceptions) were traditional and conservative.

But then food became a center of attention and there was an evolution. Traditional Portuguese gastronomy (ingredients and techniques) is being combined with modern ingredients and techniques with an innovative spirit. New quality restaurants and food stores are emerging and betting on high-quality Portuguese products. The culinary scenario is getting very interesting.

Lisbon now has poke, Vietnamese, and Syrian restaurants, something that wasn’t here a few years ago. What international cuisines do you wish Lisbon had that it currently doesn’t? We are starting to have better offers in terms of international cuisines. I invited the well-known Peruvian chef Diego Muñoz and the well-known Mexican chef Roberto Ruiz to work with me in a partnership. With Diego, we opened Cantina Peruana here in Lisbon, and with Roberto Ruiz, we established a partnership contract to bring Cascabel to Lisbon. The concept Cascabel already exists in Madrid and is very successful. It’s a concept created by and signed by chef Roberto Ruiz. Here in Lisbon, at the Gourmet Experience in El Corte Inglés department store, Grupo José Avillez implemented it and assumed its management. We think it’s important to reinforce Lisbon’s international cuisine offer with the knowledge of the best international chefs.

What young chefs working in Lisbon should our readers pay attention to? There are good young chefs, and there are recognized Portuguese chefs to whom readers should pay attention, such as Henrique Sá Pessoa and Alexandre Silva, two well-known Portuguese chefs. Both have launched interesting projects. Henrique Sá Pessoa reopened Alma restaurant in a new location, in Chiado. And Alexandre Silva opened Loco. These two great restaurants are not to miss.

What are you working on these days as far as new restaurants? I’m always thinking about new projects. For me, new ideas generate energy and drive me to go beyond the normal boundaries of possibility. In relation to other projects, we’ll have news very soon. We are working on new openings in Lisbon, Cascais, and Dubai. Stay tuned.

What is a typical week like for you? How many hours do you work per week, and how often do you travel? I like to get up really early. I usually work 12 to 14 hours a day. I’m always in touch with my team and I know everything that is going on. At Belcanto is where I cook. These days I travel very often. It’s all possible because I have a great and very professional team.

What do you do for fun and to relax? My free time is very limited, so I love to spend it with my family. I also love to travel.