José Cardigos Bastos: Behind the Tints and Varnishes

The Lisbon-born artist José Cardigos Bastos just finished his most recent exhibition Tintas & Vernizes at the Espaço Cultural Mercês Gallery in Príncipe Real, a small and curious space managed by the Junta Freguesia Misericordia. It took him just over five months to produce all but one of the paintings for the show, which is no small feat considering the quality and craftsmanship you can find in each piece.

At first glance, his paintings look like photographs with enhanced yet elegant detail and almost super-human attention to light and shadow in vibrant, high-contrasting color values. It was no surprise to learn that the self-taught artist was first trained as a photographer and just happened to also have enough patience, talent, and passion to put on the canvas what he sees through the lens.

Upon entering the exhibit on the last day of the month-long show, I was immediately struck by the Portuguese-ness (no, this word doesn’t actually exist) seeping from his work. “What interests me is real life,” he said, “even though some say my paintings lack human figures. To me, the presence of people is implicit in each scene.”

His subject matter ranged from light and shadow bouncing from the terracotta rooftops of Lisbon, to the Carris Museum in Alcântara where the iconic trolleys rest for the night, to the facade of an abandoned paint and varnish factory before it was recently repurposed to house a trendy new condo in Beato. But looking beyond the strokes comprising each wall, José was right. The residents of each neighborhood were there behind them, and even in some cases, on the walls themselves: their histories trapped behind each layer of peeling paint. “I only wish I had time to paint Portugal from north to south,” he added.

The detail in each piece is something that obviously takes a great deal of patience to achieve, in fact, many of them reminded me of the style of painting done by the great American painter Edward Hopper. I mentioned this to José and he was beyond ecstatic to hear it. “He’s one of my all-time favorites,” he said. “His work and the work of Andrew Wyeth have always inspired me.”

When asked how he managed to capture his scenes so clearly, José said, “I love the contrast between shadow and light and finding just the right framing for each image. I like to force people to see digital photography on the canvas, so when I see something that I think needs to be rendered in paint, I take a picture of it and spend the next three weeks to one month painting it. I’ve tried working plein-air but the experience is too fast. You can’t fiddle too much with details, so it gives a different character to the paintings.”

The piece that grabbed me first was a pastoral scene featuring a recently-painted white and blue cottage. To me, it was obvious that it was situated somewhere in the Alentejo, even though I know I’ve never visited this particular place before. It turned out I was right. “Some people tell me they see my soul in these paintings, so I guess you could say you can find my soul there in the Alentejo.”

The sides the house had been recently whitewashed, and as in many of his paintings, you can actually feel the texture of the ancient walls behind the fresh paint if you look long enough. It’s easy to understand how one could find sanctuary here: the walls themselves had undergone a healing process. He said, “Yes, I run there when I need to get away. In fact, this is the place I ran when I had just got out of a relationship and needed some time to myself.” 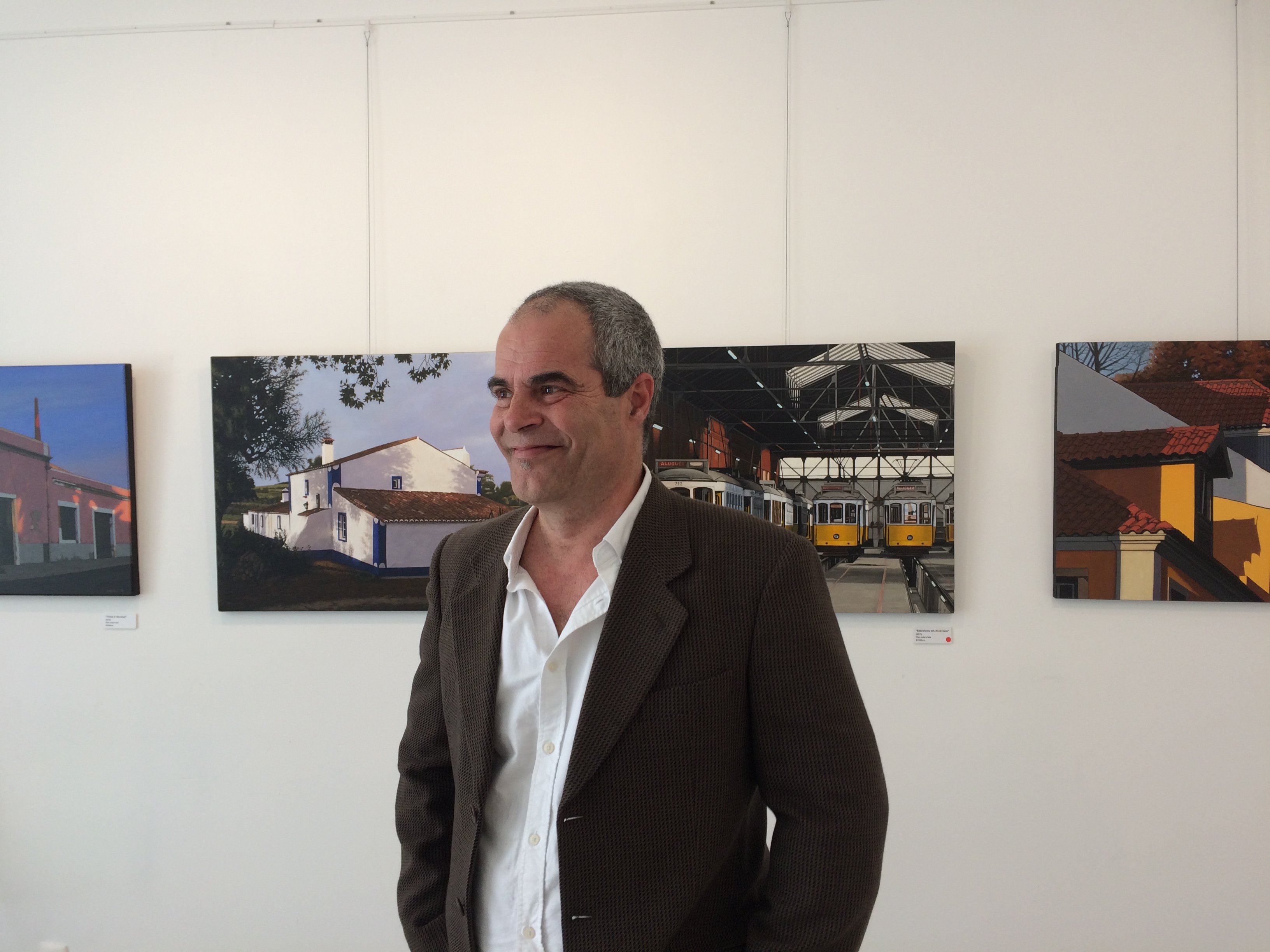 I asked José what he thought of renovations being made here in his hometown and he replied, “There’s beauty, light, nostalgia, and saudade in Lisbon. Old and battered things ultimately have a bigger story, so I love seeing some of these buildings being brought back to their original glory. I’m only sad for the ones that don’t survive.”

Now that the show has ended, José has returned to his studio at the Fábrica da Pólvora in Barcarena, Oeiras, to continue his work. He tells me his plan is to try working with egg tempera paint next as he attempts a series of paintings featuring the light at dusk. “I’ll have to make my own traditional gesso and panels,” he said, “but I think it will all be worth it in the end.” We couldn’t agree more — dusk is the perfect subject for this rising star.