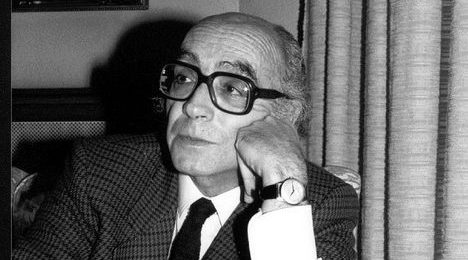 José Saramago. The “wild radish.” The man whom many consider to be the best Portuguese novelist of the 20th century.

José Saramago. The “wild radish.” It was a name born of spite but came to be fitting for the radical man whom many consider to be the best Portuguese novelist of the 20th century.

Saramago was born on November 16, 1922, in the village of Azinhaga. His family were rural laborers, and his early years were spent in abject poverty. When he was just two, his parents moved to Lisbon in search of work, and it was here that Saramago spent most of his life with his father, who found a job as a police officer and his mother, who worked as a cleaner.

It was in the capital city, at the age of seven, that Saramago first discovered his real name. When enrolling him in school, his parents were told his birth certificate listed not “de Sousa” as expected, but rather Saramago — the spiteful nickname given to his father in Azinhaga. Not to be slowed or subdued, his father duly took on this new name, meaning “wild radish.”  “I think never before in history has a son named his father,” Saramago recounted.

Unable to afford a grammar school, Saramago’s parents moved him to a technical college when he was 12. It was here that the author trained as a car mechanic, which led to the first in a series of sporadic jobs that Saramago would take before making his name as a novelist. These included working as a locksmith, at a metal company, as a publishing production manager, and later as a translator, newspaper columnist, and editorialist, to name but a few.

One of the reasons he burnt through so many jobs was his leftist political affiliations. With the military coup in 1926, and Salazar’s rise to power in 1932, Saramago spent most of his life under political tyranny. This clashed with his personal convictions, and he eventually joined the hard-line Portuguese Communist party in 1969.

Political oppression also shaped his writing. Much of his work can be classified as fantastical allegories with realist settings — the classic tools of a writer under a dictatorship. This can be seen in one of his most famous works, Baltasar and Blimunda. While it is set against the backdrop of 18th-century Portugal, during the Inquisition, it focuses on a veteran and his lover escaping on a flying machine powered by human will: a mix of whimsical storytelling with the horrors of the world around it.

Saramago is also well known for his quite unique style of writing, often having long, uninterrupted sentences that last for paragraphs or even pages. Broken only by commas, this flowing style is said to represent speech. His experimental writing extended to the removal of capital letters and quotation marks as well as sudden shifts in tense and perspective.

His political affiliations eventually led to him being appointed deputy editor of Diário de Noticias following the carnation revolution of 1974. However, this was short-lived, and the following year Saramago was removed from the position as part of a wave of anti-communist sentiment. It was this dismissal, and a period of unemployment, which led to Saramago writing not as an editorialist, but as a novelist.

His rise to prominence came late in life, when he was already in his 60s. Despite his advancing age, his career was not without controversy, and he remained a thorn in the government’s side until the end. In 1992, his book The Gospel According to Jesus Christ was blocked from the prestigious Aristeion Prize for literature by the Portuguese government, for offending the Catholic community. This led to Saramago’s self-imposed exile to Lanzarote, in Spain’s Canary Islands, where he lived until his death.

In 1998, Saramago won the Nobel Prize for Literature, with the committee praising his “parables sustained by imagination, compassion and irony”, and his “modern scepticism about official truths.”

Saramago continued to write until his death in 2010 at the age of 87. His funeral took place in Lisbon and was attended by tens of thousands of people. The next year, on the anniversary of his death, his ashes were buried outside of Casa dos Bicos, where the José Saramago Foundation is based.

Saramago’s final novel was published posthumously in 2011, and his name lives on through his foundation, which promotes human rights, Portuguese culture, and environmentalism.

If you’re inspired to read some Saramago, here are few places to pick up English-language books in Lisbon. The Saramago Foundation’s museum about the author is well worth a visit, too, if only to see his calendar entries, such as: “10:00: Accept Nobel prize. 14:00: Lunch with mom.”