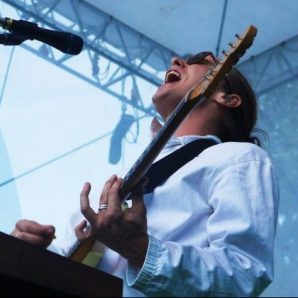 The British band Jungle, led by Tom McFarland and Josh Lloyd-Watson, took the stage last night at the LISB-ON festival in Parque Eduardo VII to droves of adoring fans, newbies, and “festies.” The headliners melted our faces with their reimagined1970s-style funk, energetically performed and flawlessly executed. They played all our favorites (though picking a favorite from their catalogue is a futile act since pretty much everything they do is lovely), including “Busy Earnin’,” “Platoon,” “Julia,” and “Lucky I Got What I Want”. These guys were the hit of the festival and their mere involvement this year is sure to bring similarly fantastic acts in the years to come. Thanks, LISB-ON, for hosting Jungle!

We got up-close and personal with the band in the press pit. Check it out below:

The band, formed in 2013, had almost instant success with their first single, “The Heat,” which brought us back to the days when soul met disco and birthed funk. While Jungle have definite roots in this genre, their sound is all their own. Esquire described it as “tropical percussion, wildlife noises, falsetto yelps, psychedelic washes and badoinking bass.” Sounds pretty accurate to us.

Jungle has risen to the top of the heap, and quickly. Just one year after the band was formed, they were nominated for the BBC’s Sound of 2014 prize, though they didn’t end up winning.

Despite their success and the hard work that goes with it, McFarland has had time to do some traveling of his own — he’d been to Lisbon twice this year, he told a cheering crowd. On one of those visits, he stood in a square to watch Portugal play in the Euro champoinship. If some audience members weren’t yet in love with the band, the mention of the 2016 Euro Cup sealed the deal.

Atlas is overjoyed to have seen these talented gentlemen (and lady) rock our city so we give them our thanks for visiting Lisbon and hope they got as much out of their trip as we did. In closing, McFarland said “Obrigado” with almost perfect pronunciation despite his Shepherds Bush drawl; the pleasure was entirely ours.