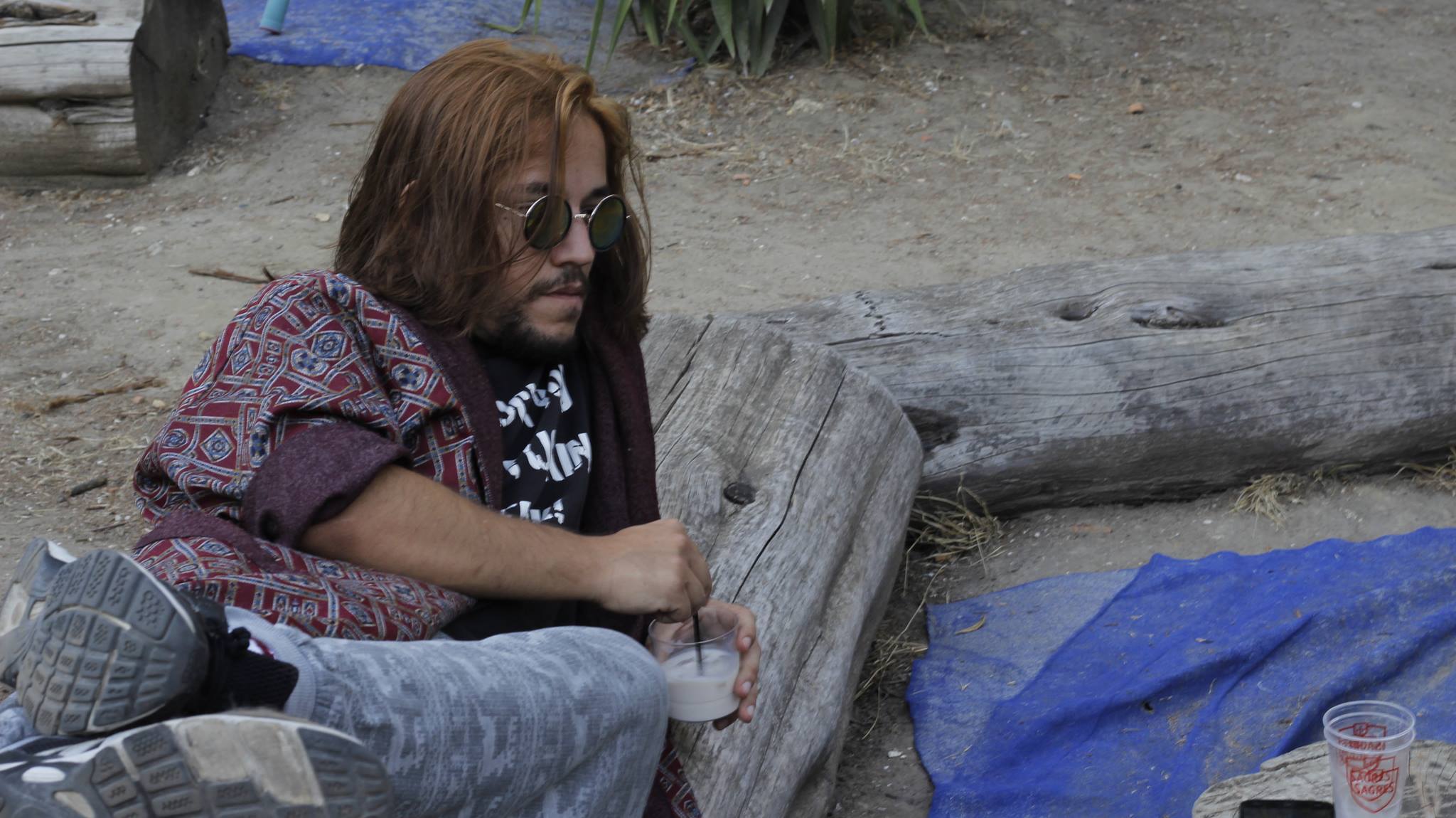 A skinny guy approaches us. He brings a friend with him, some Steve Buscemi look-alike. He comes with a proposition: "Do you wanna trade a joint for a white Russian?"

My friend Mauricio and I sit in a daze on a park bench somewhere in Campo Grande when we spot a beautiful girl wearing a tight blue dress heading towards Avenida do Brasil. The sight of her snaps us out of our stupor. We are sobering up and realize we need to hurry. It’s almost 18h.

Our own private Lebowski Fest had already started the night before at a bar in Torres Novas with gallons of cocktails until the wee hours of the morning. When I woke up several hours later, my mind felt numb. Mauricio was still asleep, too big for the couch he was laying on.

Lebowski Fest popped into my mind. “We gotta get there and we’re over 100km away,” I muttered. Mauricio woke up. “Mind if I do a jay?” he asked with a sheepish grin on his face. We grabbed a sandwich from the kitchen and left the house in a drug-induced haze. After a lightning-fast bus ride, we arrived in our country’s capital. “Gotta put on the robe,” I said.

And so I Duded up. I became a long-haired, shaggy-bearded Dude in pajama pants and a robe. Some people stared, most didn’t care. To them, I was just another bum wandering around looking for some pocket change.

Lebowski Fest had been advertised as a gathering of Coen brothers devotees and fans of their 1998 masterpiece, a film that has achieved cult status and even spawned its own religion: Dudeism. The festival’s facebook event page had promised booze, bowling, live music, cosplay, and a screening of the film, but even so, we were not sure what to expect.

We walk deeper into the woods until we see a few dozen people gathering around a small kiosk.

“Is this it?” asks Mauricio, a laid-back art-school drop out who runs a paintball business for a living and has occasionally acted in the short films I’ve directed. Unlike me, he’s not dressed as a Big Lebowski character, but his floral-printed attire fits right in.

Creedence starts playing, so we figure this is clearly the
time for white Russians.

We approach the small crowd and everyone stares at me. It makes me anxious, uncomfortable. We try to figure out where we are while ordering a much-needed beer. Some skinny goofy-looking guy approaches and starts blathering about how my Dude costume is weak. “You should have at least brought slippers,” he says. I laugh it off.

Mauricio and I sit on a log drinking, wondering why there aren’t many people around. “Maybe it’s still early,” Mauricio says. Creedence starts playing, so we figure it is time for white Russians, a mixture of cheap vodka, Kahlúa, and cream. The barman tells me I have cosplay discount. Fuckin’ A!

The skinny guy approaches us again. He brings a friend with him, some Steve Buscemi look-alike. He comes with a proposition: “Do you wanna trade a joint for a white Russian?”

We are surrounded by good vibrations — everyone is chilling. The music is spot on. People are bowling on a Wii console projected on the screen. I find out there’s a prize for best cosplay, and up to then it seemed I had a good chance.

Then, Mauricio’s arm points behind me, “Look!” 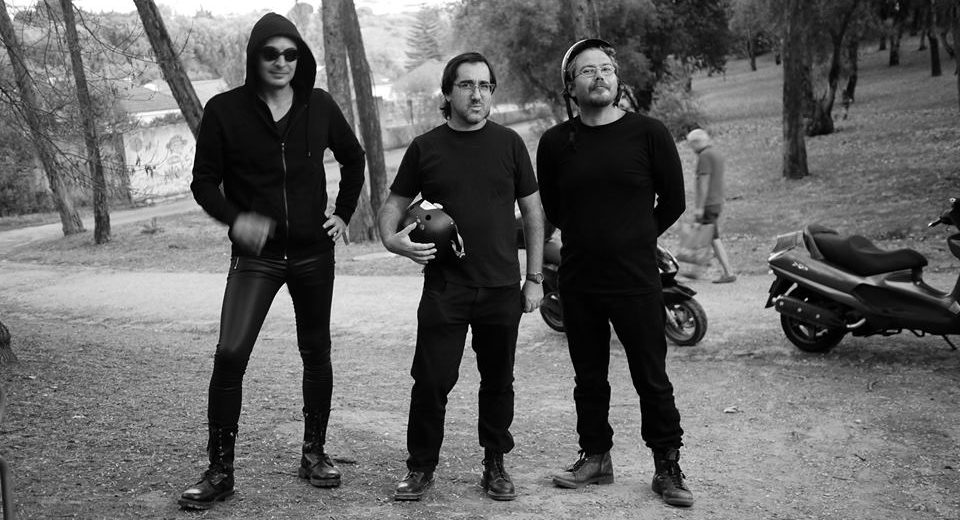 I turn around. “Those fucking nihilists!” Three German-looking dudes, dressed in black clothing and bike helmets are making mischief on the other side of the park.

We get up to investigate. Live music has started, performed by Presidente Drogado, a guy who sings about drugs, wine, and speed metal and clearly doesn’t take himself seriously. His “fuck it” mentality is perfect for the event. People smile at me as I cruise trough the crowd. They ask for photos or simply throw the random Lebowski quote.

“Over the line!” someone yells. I wonder if this is what a celebrity feels like.

I approach the nihilists for a photo. Mauricio is acting as the event’s improvised photographer. “We want ze money, Lebowski!” they jokingly scream at me.

Bunny’s with them, too, and they even brought a marmot. Not a real marmot, though. “Keeping wildlife, an amphibious rodent, for, you know, domestic…within the city, that ain’t legal!” Unlike the scary one in the movie, this one is much nicer. 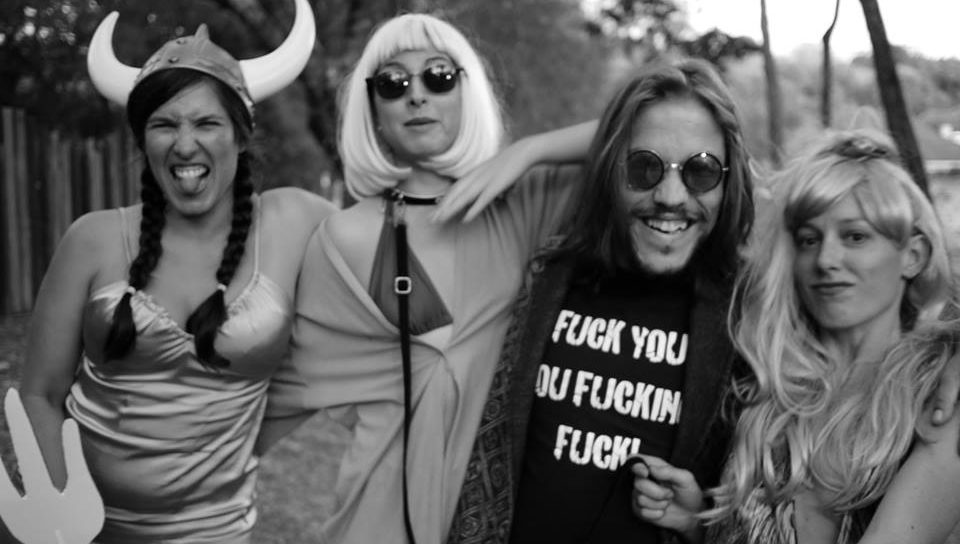 Not long after, The Big Lebowski screening starts.

There are never more than 50 people in the crowd and I feel at home. We giggle our way trough the movie. Almost everyone knows it by heart: I can see their lips move in the dark, silently mimicking their favorite character’s lines. I’m already too wasted by this point, mumbling the Dude’s lines. Some random girl sits by my side, we don’t share a word. Instead, she kisses me.

I wonder whether her proposal is real or some sordid variation of a Lebowskian quote? Aah, Lisboa.

I find myself stumbling through the fest once again, looking for my friend. He’s nowhere to be found. Later, I’ll find videos of him running trough the woods filming us from afar on my camera.

Eventually, we meet at the bar, where we also meet the organizers. Everyone gathers for a photo. The first Lebowskian Fest is a success and we’ve gained new family in the process. 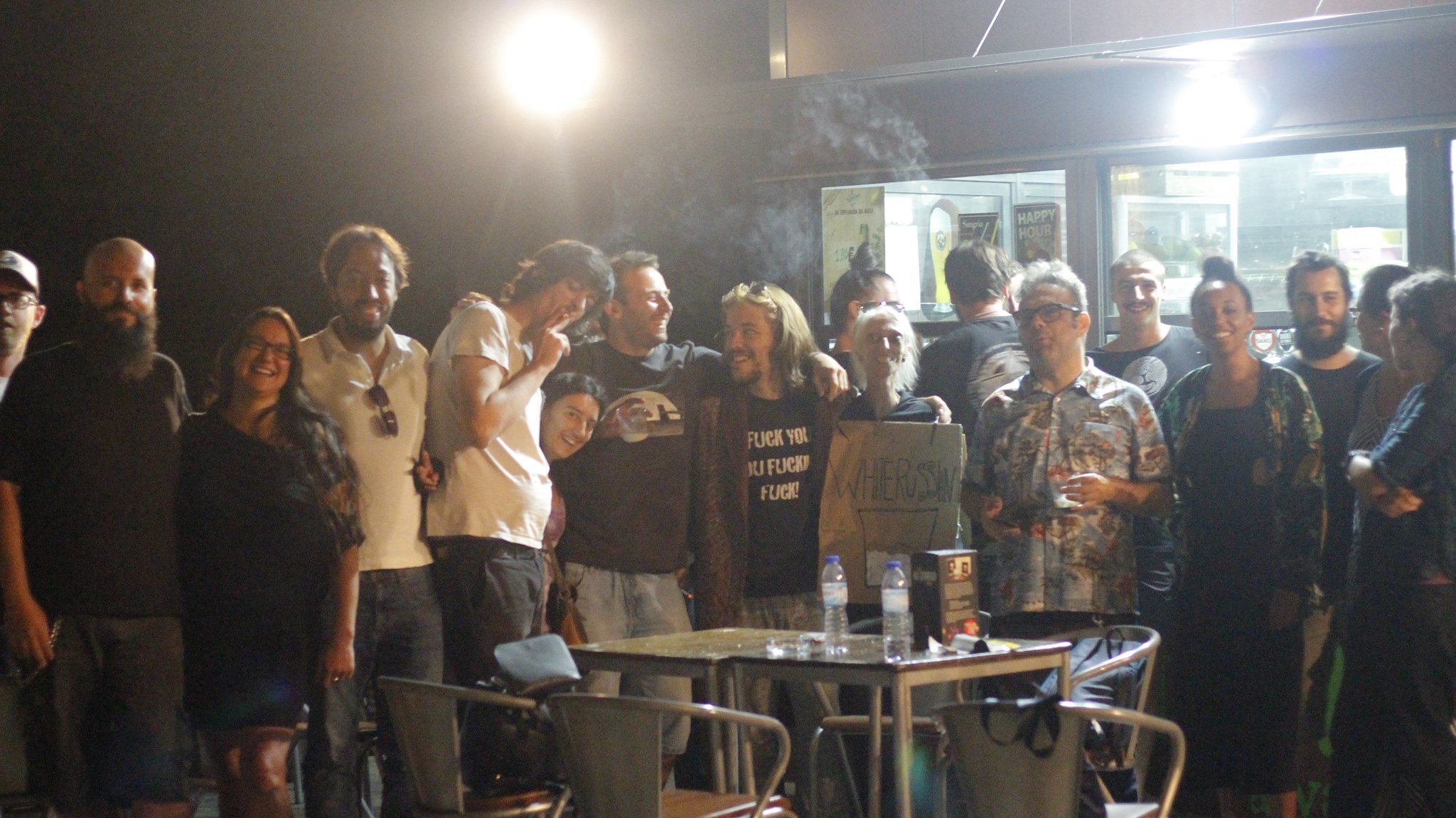 People offer us a place to stay for the night but Mauricio and I have other plans. We set off for what would become an even stranger night. We walk for miles back and forth, me in my stoner attire, Mauricio in his floral shirt. Everything culminates with me entering a supermarket at 8h30 to get some food.

As I move across the aisle, a sweet elderly woman looks up at me and asks, “Excuse me, sir, but are you wearing a robe?”

I give her the biggest smile I can in my drug-induced half-catatonic state and proudly say, “Yes, yes I am.”