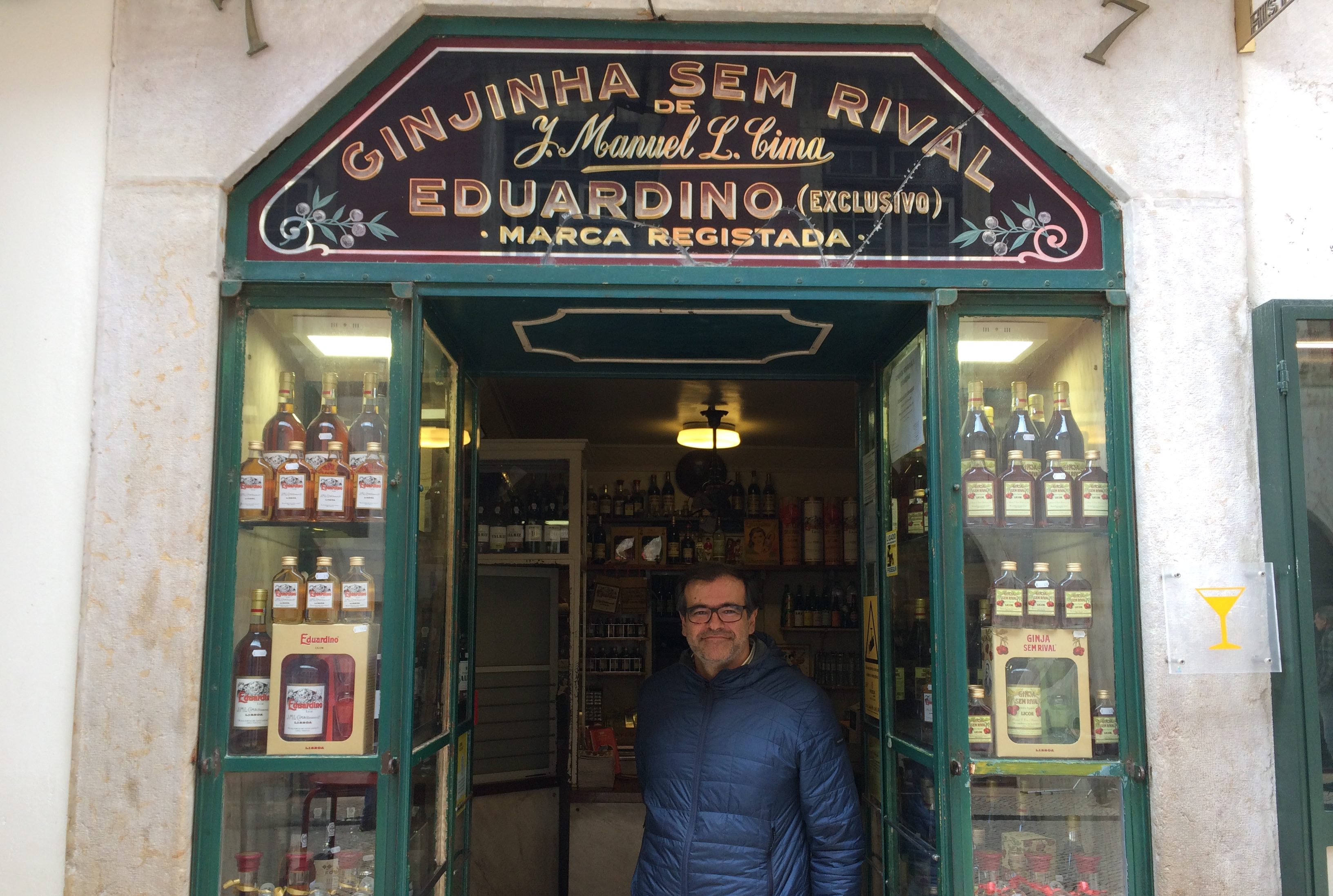 You might know his family better than you know him: Nuno Gonçalo Lourenço is the grandson of José Manuel Lourenço Cima. Still not ringing a bell? J.M.L. Cima founded the local Lisboeta’s favorite cherry liqueur stand Ginjinha Sem Rival the same year as São Domingo’s own A Ginjinha (otherwise known as the first stand) started slinging the medicinal beverage across the street.

The exact date that Sem Rival was founded is unclear as flooding ruined official documentation, but it’s safe to say it officially opened in 1840 and has since had a rich and wonderful history. For example, in the ’30s, they say a barefoot Amalia Rodrigues (Portugal’s most famous fadista) used to sell lemons out front, a legend the store embraces in the form of a picture of their favorite fadista hanging near the counter above a bowl of lemons. 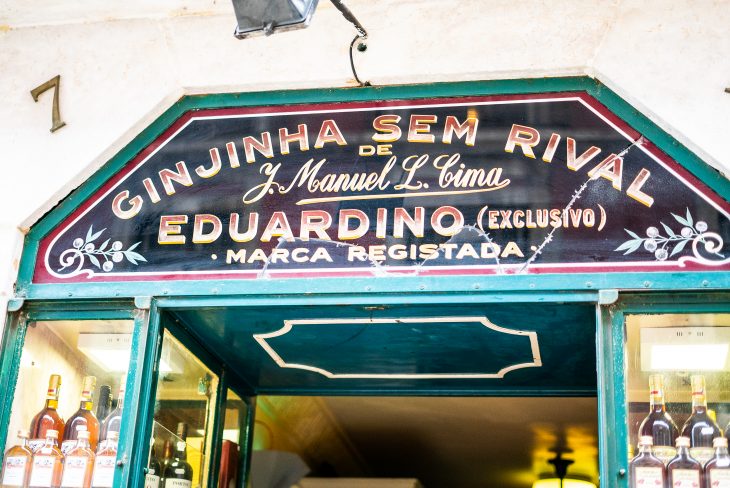 Aside from its alleged affiliations with the fadista, Ginjinha Sem Rival is famous for three things: the friendly faces and expert pourers behind the counter, their cherry liqueur (obviously), and their Eduardino.

What is ginjinha and when do you drink it?
Ginjinha is made from the soaking the ginja berry in a used oak barrel containing aguardente, cinnamon, and honey. First, it’s important to understand that this 23%-proof alcoholic (some other brands have a mere 18%) beverage can be drunk at any time of day, from morning to night, and there is no cultural rule as to when it’s okay to have a glass. Some Portuguese drink it in the morning, some at night before bed, and some at the end of a meal. In the 20th century, some parents still gave it to their children to cure a whole manner of issues from toothaches to tonsilitis and even some pharmacies carried it behind the counter as a cure-all.

What is Eduardino?
On the sign above the door, the shop proudly announces that it is the only shop that carries the registered trademark liquor Eduardino, (exclusively attributed to the shop and J.M.L. Cima) which owes its name to a very popular Italian (or Catalan) clown. Eduardo acted in the Colosseum and was said to have invented the liquor when mixing ginja with anise at Sem Rival before and after each show. Mr. Lourenço Cima soon began to commercialize it with the name Eduardino which means cute little Eduardo.

Now that you know about the shop, you know the backstory of Gonçalo who took over its management seven years ago with his cousin Luís Ferreira. He’s no stranger to life as a Lisboeta having grown up in one of the most celebrated spots in the city, nor a stranger to quality products, so Atlas felt that if anyone this was the guy to ask for recommendations of things to do around town. You don’t get more local than the grandson of J.M.L. Cima. 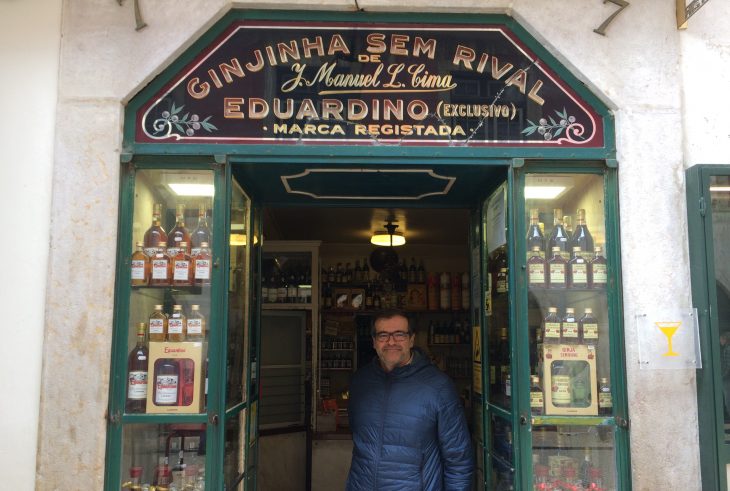 The steaks here are amazing even though my friends say I make a very good one myself. Thursday’s cozido a Portuguesa can’t be beat, nor can their queijnho fresco (fresh cheese), plus its location near the Fonte Luminosa makes the walk back home even cooler. This is one of my favorite restaurants in Lisbon for sure. It’s best to make a reservation before you go, though, because I’m not the only one who feels this way!

This spot in Alvalade translates to parsley and cilantro. It’s a really good and really professionally-run Lisboeta restaurant owned by José Duarte, a friend of mine. Ask for the upper room and make a reservation! It’s one of the few places to get razor clams rice but you should just get everything— it’s all amazing. Pro tip: They say Mick Jagger ate here at least once.

This is the place to go for the best coffee, croquettes, and beer in town. First, they make their coffee from the balão (the antique glass balloon-style brewing contraption seldom used anywhere anymore) which is something I remember my grandfather doing. Sometimes I still use one at home, but not too regularly. It’s nice to come here for that. Also, the croquettes made here are outstanding and best served with their specialty half white half dark beer out of a 70-year-old pressão. These guys are the pros.

This is my favorite port wine because the same family has made this quality wine for 400 years near the Pinhão river inside of a small 18th-century palace. I can say for certain it’s the best place my family and I have ever picnicked. The family-owned company has 64 vineyards in the Douro and they don’t produce every year unless it’s excellent. No one else in Lisbon sells this brand except me— I believe in it. I only sell things I like. The Moscatel is especially good — I could drink a bottle.

A Tendinha do Rossio, Rossio

This is the oldest client of Sem Rival with more than 90 years of doing business together. Aside from serving the best ginjinha, they have the best salgados—  the leitão and/or shrimp rissols, beef croquettes, the pasteis bacalhau, fried filets, and even their queijo fresco are so good that I often take my lunch here. I think they also make the best soup in town: my favorite is their white bean soup or even the chickpea soup. I don’t know if I’ve ever had a caldo verde here, but I’m sure it’s excellent if they make it.

This is my favorite place for sushi and sashimi. It’s just outside the market 31 Janeiro on the ground floor near the entrance for the Loja do Cidadão. It’s owned and operated by a Brazilian guy who worked under a Japanese master chef named Yoshitaki who used to own restaurant Aya on Rua das Trinas in Madragoa. It’s excellent.

For me, this is the best pizza. My kids used to call it restaurant dos barcos (the restaurant with the boats) and even though they are a lot older now, they still call it that. Obviously we go there a lot as a family. My favorite pizza there is the one with anchovies and capers— I really like really strong flavors! In the summer I usually go for the one with prosciutto and figs. 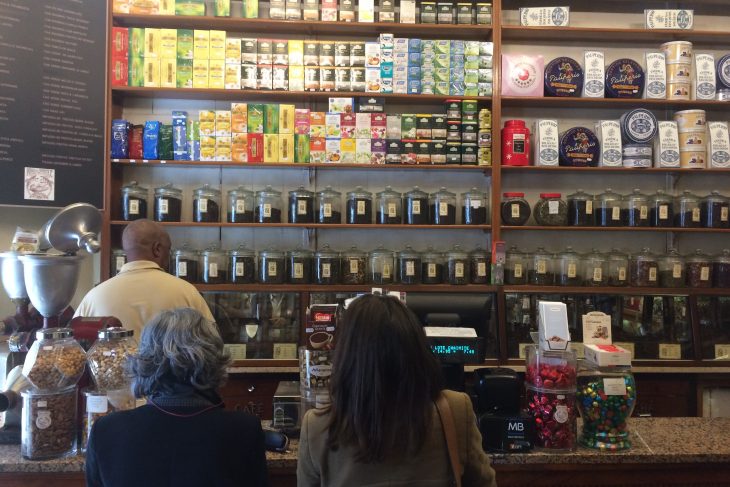 By far, it’s my favorite pérola to buy tea and coffee. The selection is very good and the staff is friendly. They have all the old products and chocolates, and even some nicer modern-day liqueurs that aren’t so common. It’s located on Duque de Ávilas just off of Avenida da República.

A Marisqueira do Lis, Intendente

I love all the seafood they serve here even more than Rameiro just down the road. In my opinion, this is the absolute best. Also, there are about 15 parking spots behind the restaurant which, if you’ve got kids, you’ll know is a very big deal. Now my kids are more or less autonomous, but when they were younger, this made all the difference! 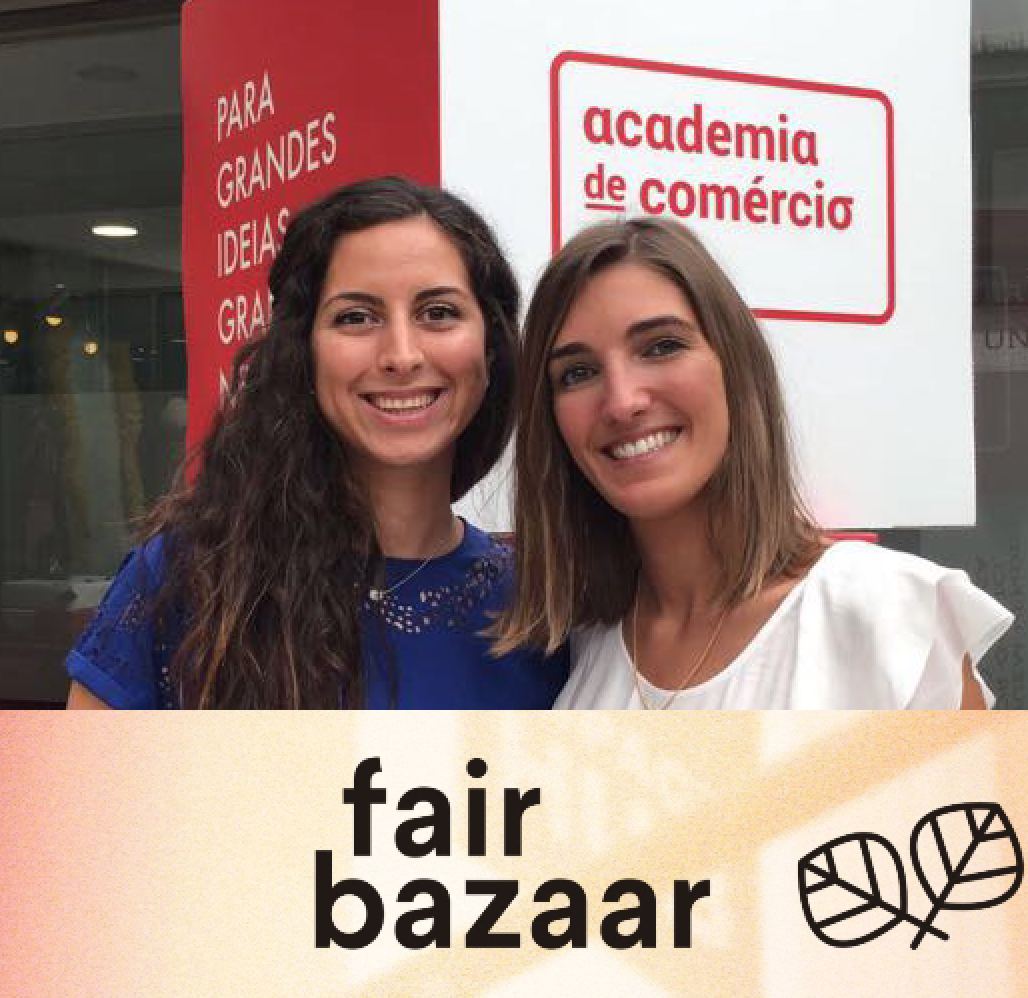 Fair Bazaar: The Retail Website That Urges You Not to Buy Stuff

There are various ways to kill time as you wait in that long line at the grocery store. Often our eyes are scanning the shelves around us as we go

In partnership with MonLisbonne.com, the fourth edition of the DIY Market is coming to Mouraria. It focuses on quality handmade goods by creators who produce “0% second-hand, 100% unique and original products.” 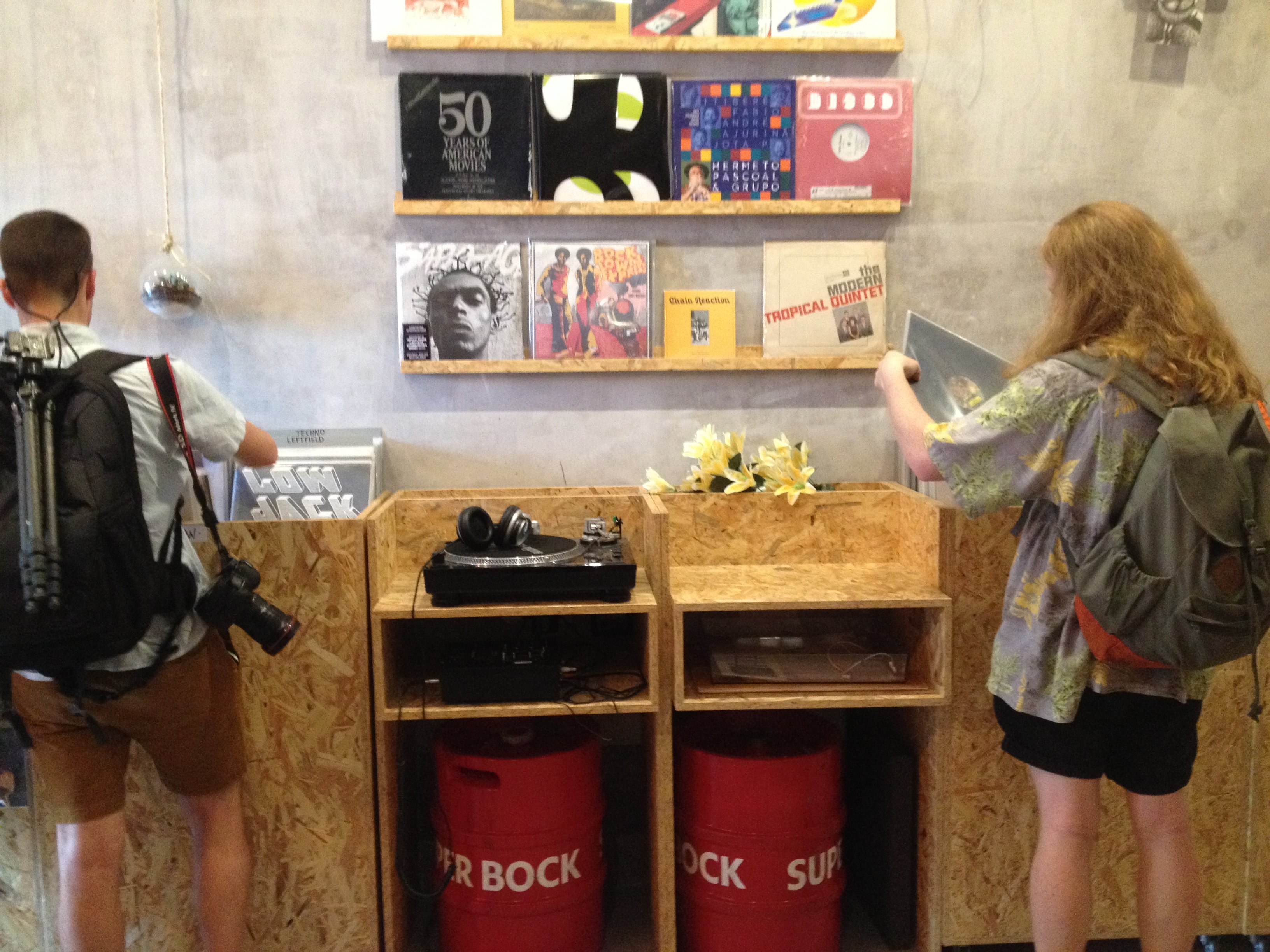 Digging in Bins: The Record Shops of Lisbon

For lovers of vinyl, Atlas has compiled a list of the best places to get records in Lisboa. Whether new releases, oldies, or anything in between. 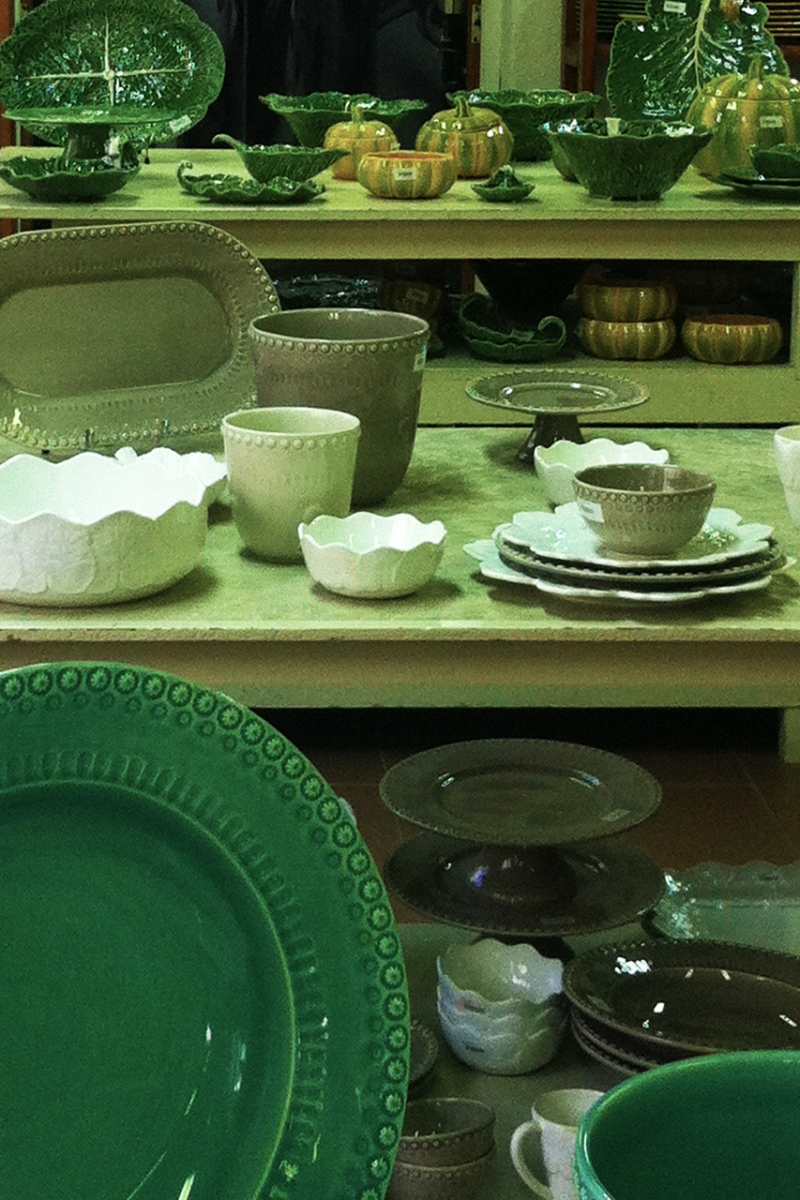 There are lots of things you can bring back to your estranged family or friends, but some are better than others. Not everyone likes wooden roosters, after all. A Vida Portuguesa Rua Anchieta 11, 1200-023, Chiado 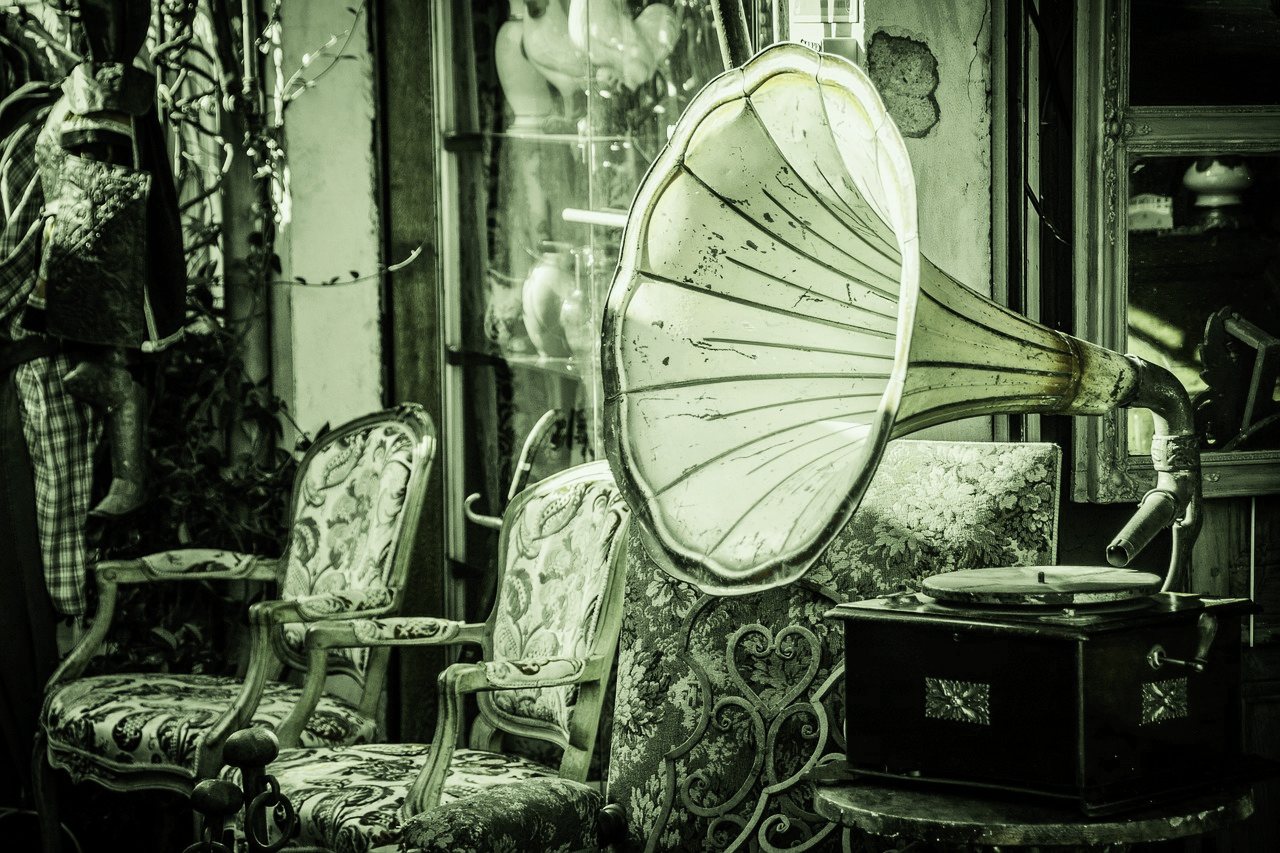 If you like a treasure hunt for your bric-a-brac, you’re in luck. Lisbon and the surrounding areas have markets happening weekly if you know where to go. Flea Markets Feira 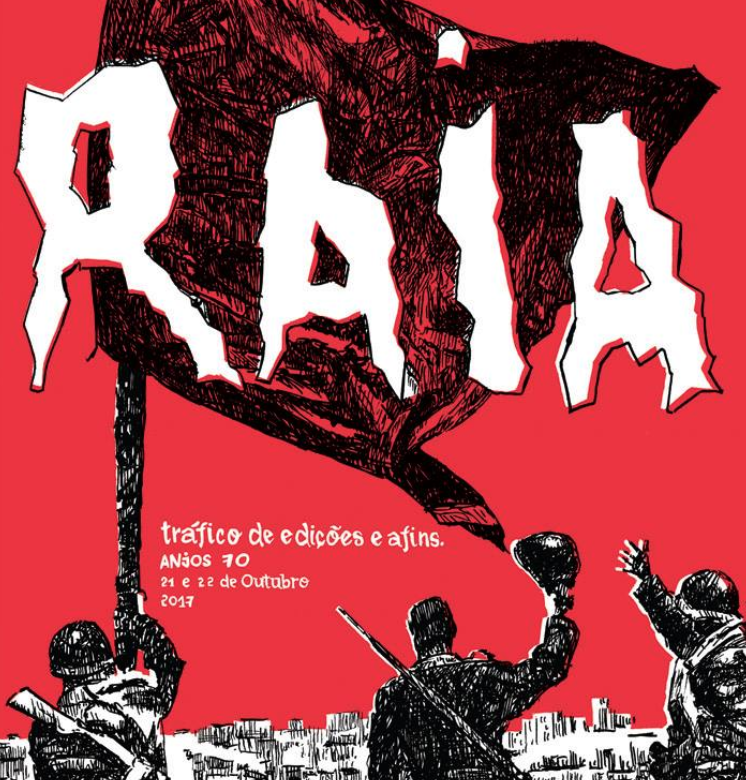 If you’re looking for the perfect opportunity to buy an artist’s book, a fanzine, a record, or simply to stay abreast of what is happening in the world of small

Where to Buy Costumes in Lisbon

Most of the lojas chînesas (Chinese shops) around town carry basic Santa suits at Christmas time and cheap cowboy hats year-round, but sometimes you need something a little more serious to get you turning heads at a masquerade. 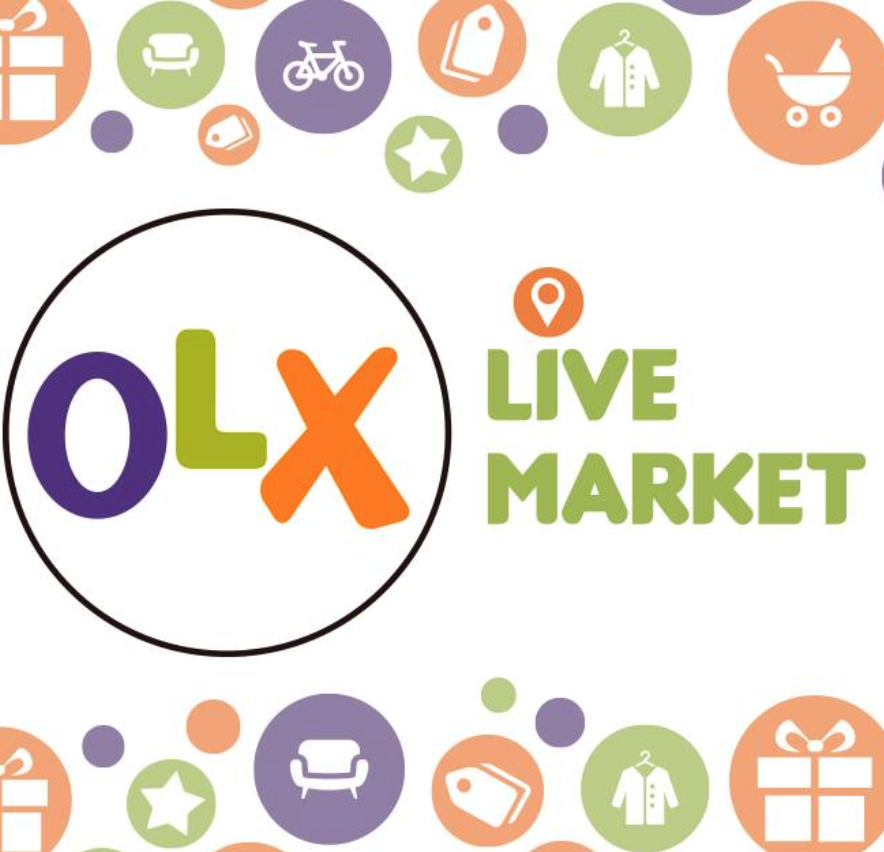 The second edition of the OLX Live Market is here and it promises to be…well, promising! Forget craigslist, OLX is the largest online venue to buy and sell your stuff in 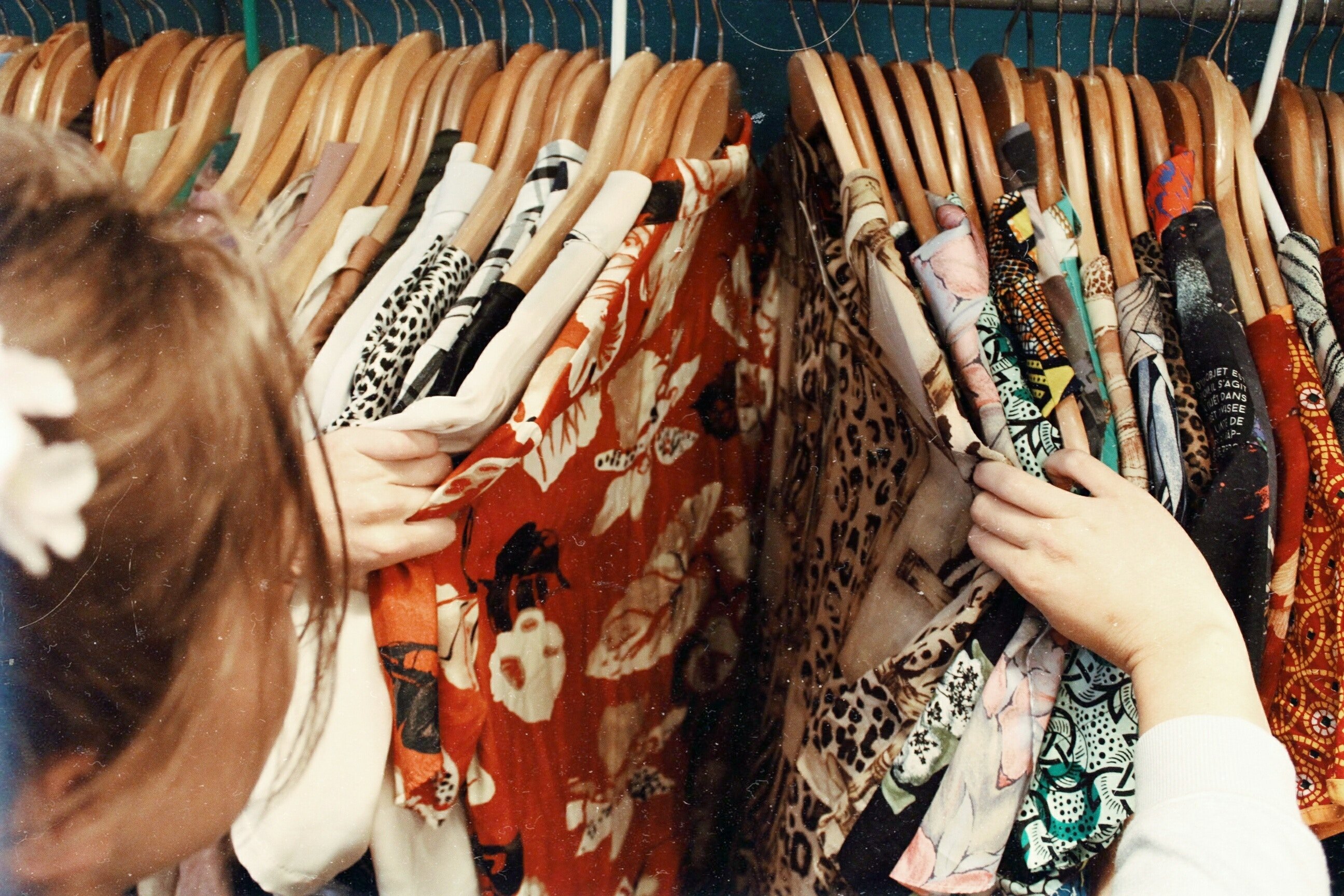 Vintage, up-cycled, second-hand, or just plain USED: whatever you call not-new clothes, here’s where to find them in Lisbon, from bargain bins to boutiques. 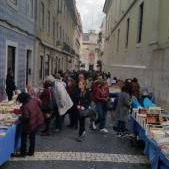 Feira dos Alfarrabistas (used book dealer fair) is a great place to break up the monotony of chain stores in Chiado and pick up something truly unique. Most books here are