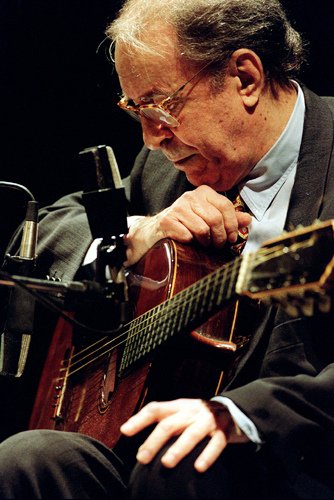 This is not elevator music, this is Bossa Nova, which is being played in the bars and restaurants of Lisboa ever more frequently.

First, no. Just no. This is not elevator music, this is Bossa Nova, but you are forgiven the mistake because, well, it’s kinda the same thing. But, this Brazillian music is so much more than the plucky muzak tunes you hear on the way to and from the office, so here’s a little history and some famous songs that you can show off to your friends with.

This Brazillian style of music developed in the ’50s and ’60s as a fusion of samba and jazz. Samba was the music of the street, with the favelas of Rio de Janeiro pumping out the fast-paced, foot-tapping tunes, whereas jazz was evolving throughout the United States. They came together in the cafes, middle-class apartments, and, of course, the beaches where Brazil’s burgeoning bourgeoise hung out.

Bossa Nova, which means “New Thing/Style,” broke onto the global stage as the first widely accepted “world music” in the ’60s with Astrud Gilberto’s English rendition of “The Girl from Ipanema,” originally sung in Portuguese by her husband João Gilberto (considered the founding father of Bossa Nova). This style is traditionally performed with a guitar and soft, almost whisper-like, singing, but many songs also bring in simple drums.

Once it hit the world stage, Bossa Nova exploded, capturing that happy ’50s feel of white goods, colorful drink umbrellas, and positivity that was really being pushed in the USA. In fact, even Frank Sinatra got in on the scene and recorded an entire Bossa Nova album. That’s right.

Alas, this happy feeling was quickly usurped by supermarkets, chemists, and, yes, elevator operators, since the soothing, relaxed tones of Bossa Nova calmed people’s minds and momentarily made them forget the proverbial Sword of Damocles hanging over their heads during the Cold War. And this is where Bossa Nova remained, in our bathrooms and boutiques, for the next 40 years.

But not now. It has busted its way back into people’s consciousness, and you can ever more frequently hear the gentle whispers of Bossa Nova legends drifting from cool clubs, bars, and restaurants. Plucked on the guitars of a new generation and sung unironically to swaying crowds.

Some of the most Famous Songs

The Girl from Ipanema

Garota de Ipanema (Original Portuguese of the Girl from Ipanema)