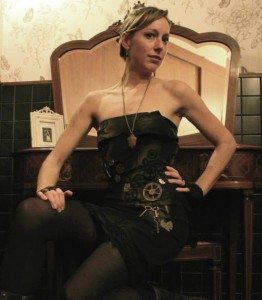 You’ve got four days to figure out what Steampunk is and how you can be one, too.

Steampunk is… Well, it’s inspired in part by the books of Jules Verne and H.G. Wells, in part by the cyberpunk movement of the 1980s, and it now has influences from Burning Man culture as well.

It’s an embrace of forgotten and imaginary technologies as a form of aesthetic statement. If you like steam locomotives, Victorian dresses, Nicola Tesla, or old clocks, you will probably like steampunk. If you also like bars, we have the perfect combination for you.

O Arranca-Corações (“Heartsnatcher”) takes its name from a novel by the French author Boris Vian. “It’s an instrument imagined by the author, a revolver with a hook on the end that is used to extract hearts. We always pictured Arranca Corações as a steampunk piece, full of gears, cranks and gauges,” Pinto says.

Designer Rodolfo Vieira Dias simplified this concept and created a logo where you can see the weapon in use, as a woman shoots a fork into the heart of her lover. Ah, steampunk love.

But the gents behind Arranca-Corações didn’t stop there. No detail has been overlooked in this cozy café-bar-petiscaria that seats about 25 people — from the name, to the surrounding light fixtures and art, to the meticulously composed cocktail and snack menu.

Even the bathroom is its own steampunk wonderland, with black tiles, copper pipes, and a Victorian vanity. The lamps, made of pipe fixings, bicycle gears, chains, and steam gauges, were executed by Antonio Scatola specifically for the space. Lisbon artists Andreia Vieira da Silva and Duarte Lazarus fill the empty spaces in between.

The neighborhood where the bar is located (between Santa Apolónia andCentro Vasco da Gama) is no accident either.

“We chose Santa Apolónia because it was from here that Portugal’s first train ride departed. We like the idea of linking the locomotive steam to the steampunk theme of the bar. The neighbors appreciate our presence, and believe it’s an interesting way to bring life to the area.”

It’s also appropriate to be located so close to the thieves’ market, as this is most certainly the best place to stock up on old rusty gears, disconnected clock dials, welding goggles, and forgotten metal scraps of bygone days. Add a glue gun, a top hat, and black vest into the mix, and you’ve got yourself a get-up.

Don’t be shy about showing up to the bar in full costume — you will receive a round of applause upon entry and an invitation for a private photo shoot in the boudouir. You’ll certainly never be the only one dressed up — it’s quite a scene, and a very friendly one. Atlas certainly had a blast getting steampunked-up for their end-of-January costume bash.

So what’s next on the horizon? First up: February 28 is a Steampunk Murder Mystery party, so you have some time to get your outfit together. Later in the year, Ogando says, “we are hosting regular events in the Steampunk and fantasy literature universe, celebrating Portuguese sci-fi authors.”

Get your gears turning, Steampunks! Need inspiration for your steampunk costume? A great collection of creations can be viewed here. Where else can I go steampunk? The biggest current festival takes place every year in Lincoln — see a dispatch from the most recent “Asylum,” as the festival is called, here. Can’t get enough? Download a free Photoshop kit of steampunk elements here.