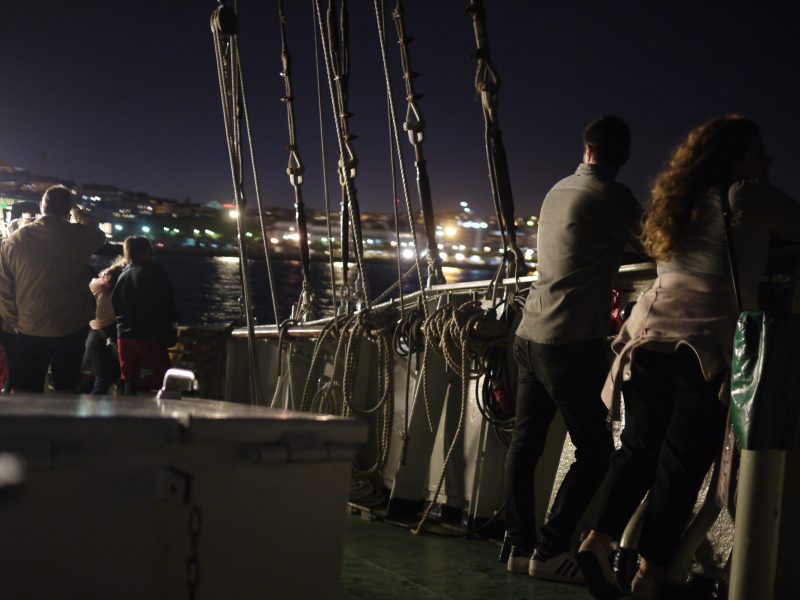 They say Lisbon is best seen by boat, and considering the Tejo is the lifeblood of the city, this isn’t much of a surprise. What did come as a surprise, however, is just quite how spectacular it can be and how easy it is to do.

I’m going to preface this by saying that I hate dark water, I don’t really like boats, and I’m not a huge fan of parties. Like, the organized parties with wristbands and stuff. But, I may have to reconsider all these prejudices after my recent ride on the Lisbon Boat Party, which proved beyond doubt that Lisbon really is best seen from the water. 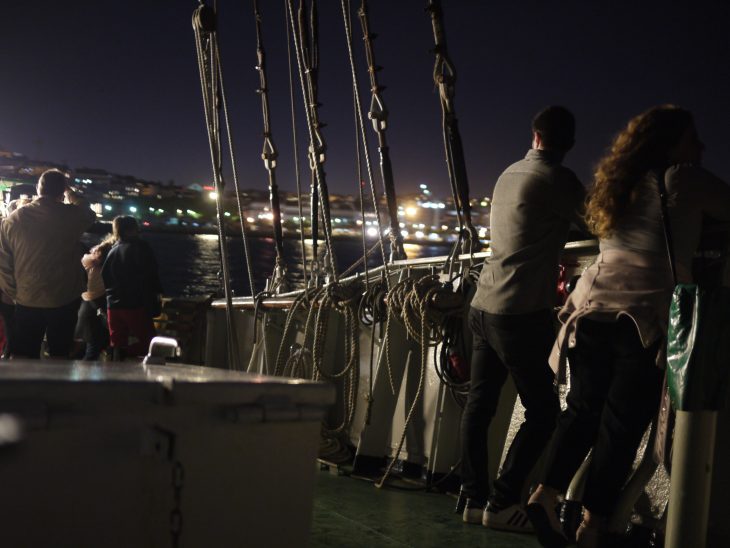 Departing from Santos every Thursday at 7 pm throughout the (very long) summer season, the party takes place on the three-masted Príncipe Perfeito. You are welcomed on board by the friendly crew with a glass of sparkling wine and are then left to explore the boat.

When we went, there was an incredibly mixed crowd, with the youngest no more than 20 and the oldest well into their 60s. But it wasn’t just a range of ages: as you walked about the boat you heard a mix of English, French, Spanish, and, of course, Portuguese. Somewhat surprisingly, the majority of passengers seemed to either be Portuguese or expats living in Lisbon.

For most of the season, you catch the beautiful Lisbon sunset as you head out on to the Tejo, but if you leave it a little later in the year (it runs until November) you may still be boarding as the sun goes down. This isn’t the end of the world, however, as it means that you get to experience the river at night when all the most impressive landmarks are lit up and the city is a sprawling mess of window lights and distant bars.

Once you set off, the Príncipe Perfeito heads toward Belem at a fair pace, and as the initial excitement of being on a boat wears off, people start to peer over the edge and admire some of the most famous Lisbon landmarks — Torre de Belém, Padrão dos Descobrimentos, etc. — from an entirely different perspective.

Then, as the name suggests, the crowd starts to drink and party. In addition to the sparkling wine, you get one free drink with your ticket, and after that, the bar is priced as you’d expect — 3€ beer and 6€ whiskey. There is a DJ looking down on you from a higher deck who plays pop hits (aka crowd favorites) and a space between the bar and the cabins makes for an intimate dance floor. The fact that the boat is divided also has the pleasant side effect of freeing up the spacious bow for those who want a more relaxed cruise, where you are able to sit, chat, and watch the city go by.

In total, the cruise lasts four hours, but for those who want to keep on partying the ticket price of 29€ includes entry into one of Lisbon’s clubs. There is food on board, but we recommend getting something to eat before heading to the boat. There are plenty of places nearby.

Pessoa said in his guide to the Portuguese capital: “For the traveller who comes in from the sea, Lisbon, even from afar, rises like a fair vision in a dream… the domes, the monuments, the old castles jut up above the mass of houses, like far-off heralds of this delightful seat, of this blessed region.” We know that he wasn’t one to shy away from flowery language and poetic license, but as you sail under Ponte 25 de Abril, cruise past Cais do Sodré, and see Terreiro do Paço shining out over the dark water, it is easy to see what he meant.