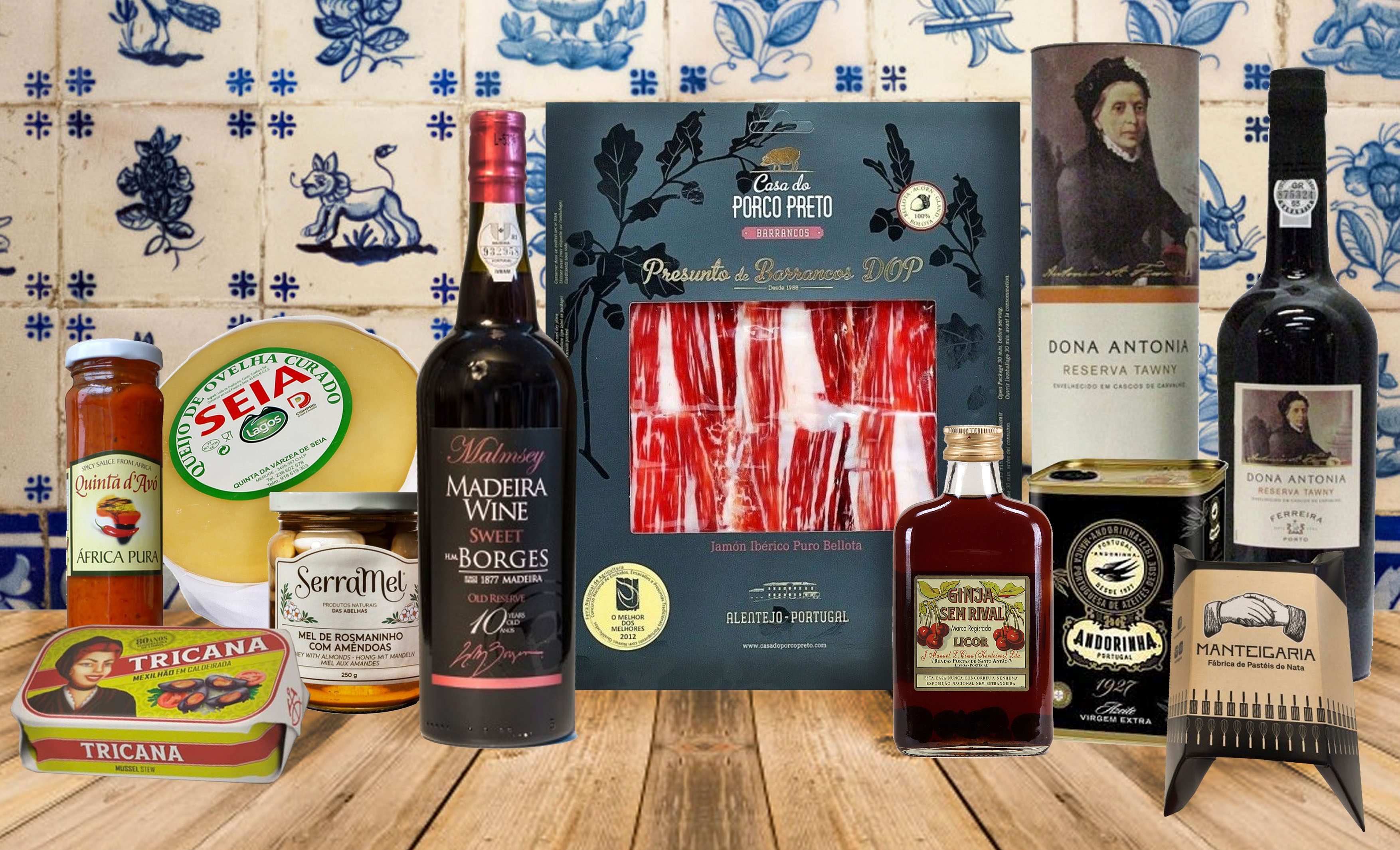 The best foodie souvenirs in Lisbon. From high-grade olive oil to mountain cheese to port.

Simplifying our lives by getting rid of “stuff” is becoming so chic that we are turning organization consultants like Marie Kondo into minor celebrities. Which is why these days your friends and family might not be thrilled to receive things they have to find space for and more excited about something they can eat and/or drink on a special occasion…or just an average Tuesday.

In terms of culinary delights, Portugal has you and your foodie friends covered, and selecting the best will help you avoid the wealth of trinkets that clutter Lisbon’s streets (e.g. ceramic swallows, a hand-woven wool blanket, a picnic basket, you get the idea) even though they might be tempting! 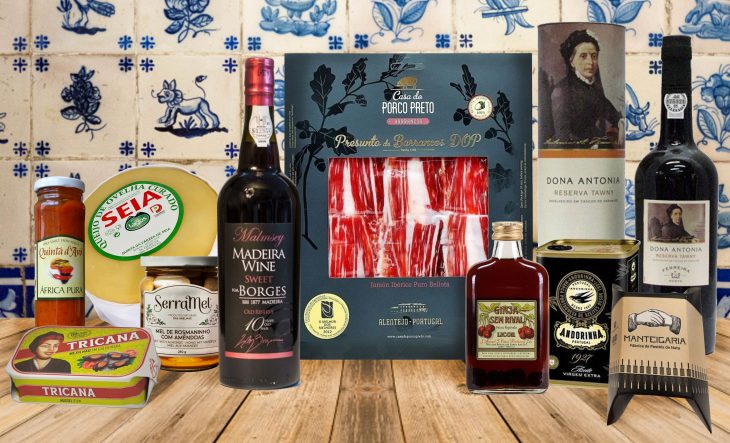 Yes, there are a few olive trees from the Bronze Age scattered about the country, but most of our olive oil production is attributed to the Romans, Visigoths, and Arabs, so we Portuguese have a long and impressive tradition in the olive game. The groves in the center and south of Portugal have been planted and replanted since the reign of King João I (the beginning of the 14th and 15th centuries) so that today, that’s where the majority of tastiest Portuguese olive oil comes from. If you see the bottle marked from the cities of Coimbra or Évora, or any part of the Tagus valley from Santarém to Lisbon, it’s pretty likely you’ve got a good bottle there. Two of my favorites are Casa de Santo Amaro Premium and Olival dos Arrifes by Herdade do Esporão but here is a list of the award-winners from this year. You really can’t go wrong with any of them.

Forget whatever associations you have with canned food: this is NOT grandma’s funky tuna salad, dog food, or spam. The tinned fish here in Portugal are second to none and will have you reassessing what it means for something to be canned— but the sheer variety of sauces, fish, brands, and packaging can leave you wondering where to begin. My advice is to start with something in caldeirada sauce. This is the Portuguese version of ragu, so thank the presence of top-quality tomatoes, olive oil, garlic, onions, and herbs for the amazing flavor of the fish it accompanies. This is the best way to discover the incredible universe that makes up the canned food industry here in Portugal, even if you’re not that into seafood. Eat it straight from the can, throw it on some bread, or pour it over some angel hair pasta for dinner, these cans are as versatile as they are tasty.

Pro tip: If you are in search of these products and walk into a shop that looks even remotely like the inside of a circus, you should know that no self-respecting Portuguese person would ever buy their canned goods there. Where should you go? Sol e Pesca, Conserveira de Lisboa, or even the closest supermercado. 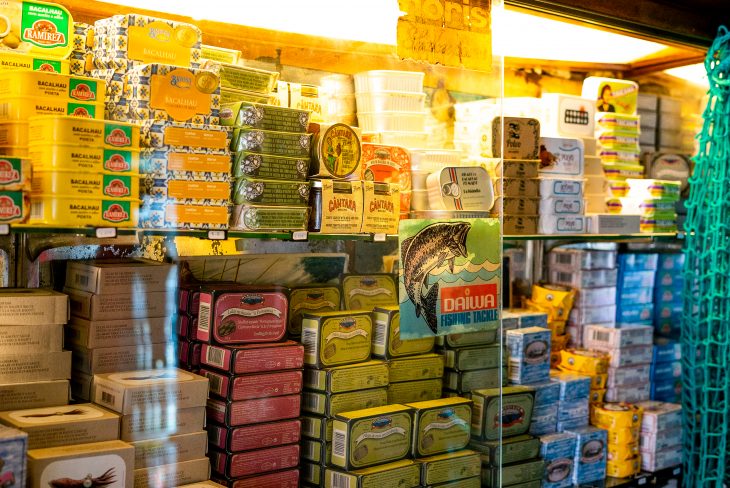 Piri-piri hot sauces are made from the malagueta pepper brought over from Africa during the colonization by Dom João I in 14th to 15th centuries (the name means “pepper pepper” in Swahili), so the Portuguese palette has had plenty of time to adjust to this— the one spice they can tolerate (and why Nando’s piri piri chicken is an international phenomenon). The Quinta d’Avó “Africa Pura” hot sauce, however, kicks piri piri sauce up a notch (or six). Quinta d’Avo means “Grandmother’s Farm” which might be the case if your granny likes it hot. This spicy paste is a full-bodied marinade without artificial additives and gives you an up-close and personal look at real African flavor, with its complex herbal taste. It seems strange to say, but this hot sauce is a truly memorable gift for the hot sauce aficionado in your life.

It might not be for everyone, but sweet and sticky honey cake aka Bolo de Mel from Madeira is one of those things that you have once and then crave at unexpected turns. It’s equally as good as a dessert or a breakfast treat, so dare to untie the twine and unwrap the parchment paper. They come in varying sizes, but I recommend starting small, especially if you have a problem with self-control. Not into sweets? Try the light, fluffy goodness that comes from the other Portuguese island. This round flatbread called Pão Lévedo has the same shape and thickness of the Bolo Mel, but it’s not sweet and it’s meant to be topped with honey, jam, marmalade, or to be eaten as is. Eat it for breakfast or carry it around for a mid-day snack. Both breads are heavy and filling, and should be snatched up immediately if you see them about! 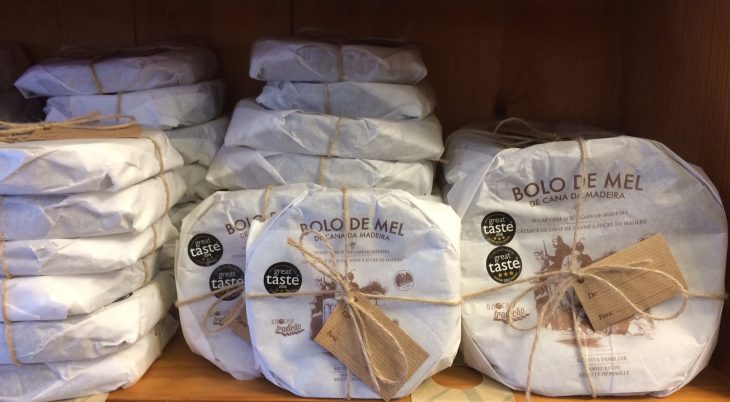 Honey is always a good foodie souvenir to snatch up, and here in Portugal, there are plenty of artisanal producers who set up shop at weekend markets and such. If you pass one of them, don’t miss the opportunity to sample their wares and pick up a jar or two of your favorite kind. You can often find small-batch jars of honey at a local mini-mercado and certainly at the nearby grocery store, and most of them are truly delicious. Just check for a “made in Portugal” stamp and you can’t really go wrong. The most famous widely-carried brand is SerraMel from just north of Castelo Branco whose humble beginnings date back to 1898. All of their varieties are delicious, but the creamy rosemary one is out-of-this-world good as is the golden wild lavender. Breakfast is ready.

We know what you’re after: the melt-in-your-mouth razor-thin presunto. You’re even willing to risk having it confiscated at the airport as most places don’t allow you to return with this kind of product. Chin up. We have it on good authority that there have been successful smugglings when the cuts have been shrink-wrapped, which we, of course, do not condone. You have been warned.

If you’re still in, you might as well know how to get the good stuff. Pata negra means black-hoofed pork. This kind of meat is sliced (by hand or machine) from the pure Iberian ham hind legs you see hanging in the windows of fancy grocers like Manteigaria Silva or even El Corte Inglês. But not all ham legs are created equal. Make sure the hoof is black and it is marked DOP (a protected origin product)— otherwise, you’re buying ham cut from a  mixed-breed pig (like Serrano ham is), which is more difficult to regulate and isn’t necessarily recognized as “top shelf.” 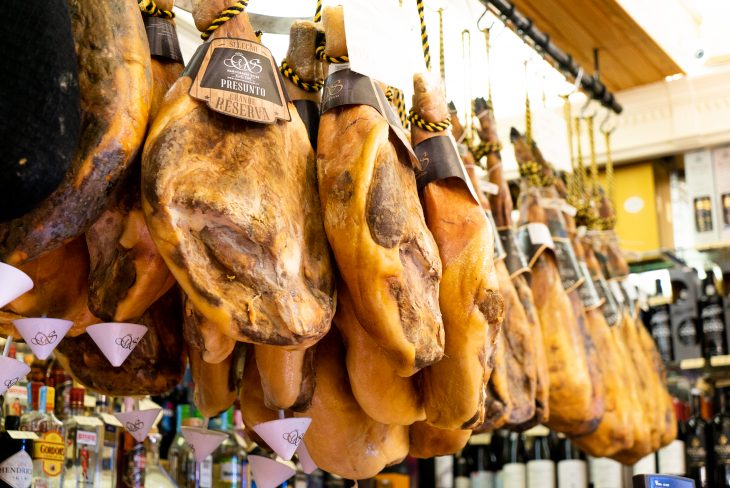 A wheel of soft cheese

The unpasteurized Azeitão cheese is DOP protected— meaning it is handcrafted up to a very rigorous code in the municipalities of Setubal, Palmela, and Sesimbra. This creamy cured sheep’s cheese has a buttery semi-soft consistency with a delicious sour and salty flavor. It’s a great bang for your buck as well since it’s produced so close to Lisbon. If you’re looking for the perfect mild brie-like Portuguese cheese, look no further.

If you’re in the market for something a little stinkier and a lot creamier, go for the Serra da Estrela cheese. Cut a hole in the top of this, the king of Portuguese cheese, which has been made for centuries by shepherds in the mountains of Serra da Estrela in the Beira region. It’s a lot pricier than you might like, but trust me, it’s worth it. Its curds are broken up by hand, which gives it a texture so soft that it is spreadable. Dip in a teaspoon or a soft cheese knife and get to work with a good loaf of bread. You’ll soon be right as rain and looking to wash it down with a bottle of your favorite vinho.

Yes, the Portuguese custard tart can’t rightly be left off the ultimate foodie list, so let’s get to it. Yes, these tarts are a must-try while you’re visiting Portugal, and no, they’re not all delicious. Some are served day-old, cold, and chewy from a recipe that wasn’t great to begin with, so keep your distance from those that look like they’ve been there a while. The best pasteis are the ones that are served fresh. The dough is made from mil folhas (thousand-layer) dough, the same as any decent croissant should be, so the crispier you can find it, the better it will be. That’s why places like Manteigaria and Pasteis de Belém are so popular: because they guarantee freshness. You be the judge of who does it best. If that means eating them both several times, oh well then! It’s all in the name of research. Both shops offer to-go boxes of two or six pastries, so if you’re going to take them with you, this is the best way to ensure they arrive at their destination intact.

Pro tip: Since freshness is what truly makes the best custard tarts stand out, taking them to go on a plane or car ride isn’t ideal, though for your die-hard foodie friend, it might be necessary. If this is the case, when you arrive at your destination, pop the tarts into the oven or toaster oven to try to crisp up the crust a bit. It will make a huge difference.

Here’s a little video I did with James Blick on the top ten best things to eat here in Lisbon. Of course, the pasteis da nata are on the list!

You shouldn’t leave the country without a bottle, however large or small, of ginjinha, the famous Portuguese cherry liqueur made from the soaking a ginja berry in a used oak barrel containing aguardente (fire water), cinnamon, and honey. This 18 – 23%-proof alcoholic beverage can be drunk at any time of day, from morning to night, so will tickle the fancy of even the snobbiest of alcohol aficionados. Besides, it was invented by a monk and originally sold by the catholic church, and is said to be medicinal. Basically, there’s nothing negative you can say about it.

Try the Ginjinha do Óbidos in a chocolate cup as a dessert or opt for the straight-up shot at any ginjinha stall you pass by…you decide which brand suits you best. My recommendation is to get a bottle from the guys who have been doing it the best for centuries: Ginjinha Sem Rival in Rossio.

There’s something for everyone in the category of port wine no matter what kind of flavor you’re after. If you’re looking or something red and sweet to have with dessert, go for a Ruby. If you’re more keen to sip something like a bourbon, opt for a Tawny. If you’d like something refreshing for a summer drink, go for a white port and add some tonic to it. When buying port it’s important to remember that not all years are good years. If you want a souvenir bottle to take home and keep but not drink, then, by all means, blow a bunch of euros on your birth year bottle, but unless you were born in 1977, you’re likely buying a bad vintage that you won’t actually enjoy drinking.

Pro Tip: Everyone’s tastes are different, but if you’re looking for a fool-proof port to gift, go for the Dona Antonia Port Tawny Reserva by Ferreira. Unlike a ruby, the tawny bottle can stay open for a longer period of time without going off, and the flavor of this one is particularly delicious, full-bodied, oaky, and fun to drink.