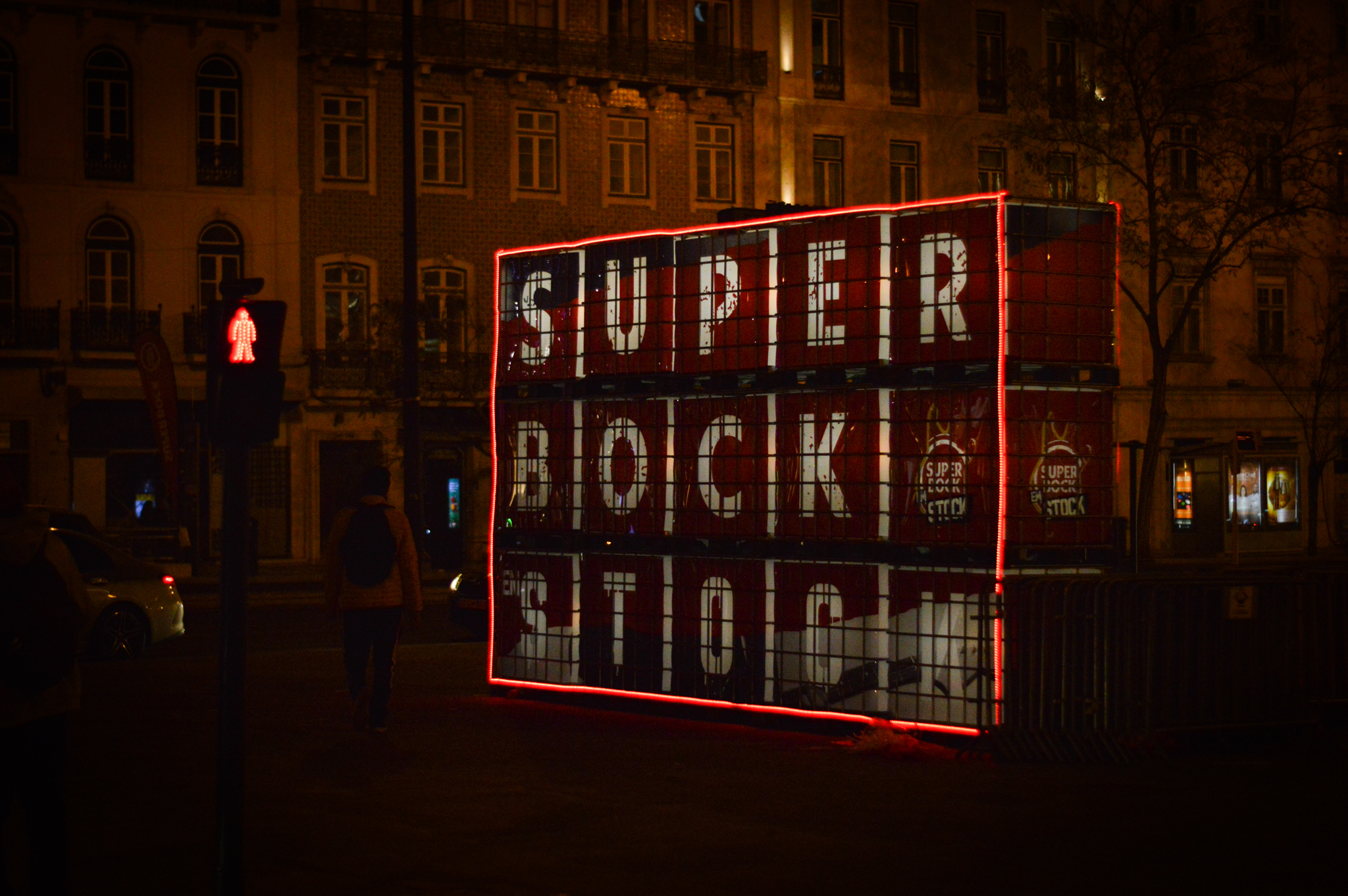 Super Bock em Stock proved to be a fine closure to the first almost-normal festival season Portugal has seen since 2019.

The grand arena, elegant theaters, historical ballrooms, and train stations scattered around Lisbon’s iconic Avenida da Liberdade were filled with life and sound this past weekend, thanks to Super Bock em Stock, one of the largest events to take place in Lisbon since the city loosened its Covid restrictions this summer. Nestled between the avenue’s high fashion shops and fancy restaurants, each venue felt distinct and unique, providing a diverse range of concert experiences throughout the weekend, from long-established Portuguese rap icons to rising indie stars from the U.K.

Super Bock em Stock proved to be a fine closure to the first almost-normal festival season the city and surrounding area has seen since 2019.

The energy was palpable as we navigated through the seas of red bucket hats handed out to festival-goers. The city and its residents have been waiting quite a while for the long-running, two-day festival to once again take over the avenue and the surrounding areas. Locals and tourists alike floated in and out of the festival’s myriad venues, sampling the quirky, local sounds of B1SHPØ in the dark, medieval Palácio da Independência or basking in the summertime feelings of Paulo Novaes in the lavish Casa do Alentejo, surrounded by hand-painted portrait panels and gold trimming. Later on, crowds dedicated themselves to the headliner of their choice at the larger, more conventional venues of Coliseu dos Recreios or Teatro Tivoli. The attendees were happy and the music was loud, but as is the case with any festival of this size and covering this much ground, Super Bock em Stock was not without its downfalls.

Planning a festival is a daunting task, with lots of moving parts subject to change at any time. Only so much control can be exercised. However, we couldn’t help but think that something more could have been done to keep the crowds in the loop when we ran into Teatro Tivoli at 11 o’clock on the first night, assured by the PDF schedule I had downloaded just two days before that Danish post-punk luminaries Iceage awaited us within, only to find an act of an entirely different nature inside. We quickly realized that we were looking at two different schedules, and neither of them seemed to be quite right. The PDF I had downloaded was obviously outdated, while the app seemed to still be figuring itself out even halfway through the first night, showing some bands slotted for both days.

It is also worth mentioning that one of the headliners, Black Country, New Road, was forced to cancel their set, and no notice of this was put on the festival’s website or Instagram. Instead, they were quietly removed from the line-up. Living in Lisbon and being able to attend both days of the festival, these line-up issues were simply a small annoyance for us, but for those traveling from all over the country expecting to see certain acts on certain days, one can only imagine the frustration this must have caused.

Scheduling biffs aside, the festival ran as a well-oiled machine. At least partially due to Covid, the overcrowding issues of festivals past didn’t make an appearance this year. Entrance queues moved along quickly, and we had no problem getting into any of the venues.

That’s not to say the crowds were sparse; on the other side of the doors, each location evoked memories of simpler times, complete with beers held high while navigating from bar back to friends, and everybody dancing shoulder to shoulder. If anyone was having a bad time, it certainly didn’t show.

Our Super Bock em Stock journey started off with a bang, front row for Portuguese rap legends Sam the Kid and Segundo Mundo. The show was very close to home for Sam the Kid, who was brought up in Chelas, and this was reflected in the performance and in the crowd. The Portuguese youth pressed towards the front and hung onto every word as the two MCs strutted across the stage: Sam the Kid,always introspective, blasted through long, intricate verses with his eyes shut tight as Segundo Mundo brought an outward intensity to the stage, jumping about and agitating the crowd. The MCs were backed up by two impeccable DJs, trading scratch licks back and forth and adding unique touches to the beats, so the spectacle as a whole was everything a rap show should be, and the connection between the crowd and their hometown hero was palpable. Both rappers clearly felt comfortable on the Lisbon stage, true veterans of the rap scene who knew exactly what they were doing.

After the scheduling mix-up the night before, it was finally time to see Iceage on the second night. I was happy to see the large floor of Coliseu dos Recreios fill up so quickly for these five boys from Copenhagen. While most of the band remained stoic and stone-faced for the majority of the show, singer Elias Bender Rønnenfelt threw himself around the stage in a loose, Mick-Jagger-meets-Drunken-Fist style of performance. Wailing vocals atop droning guitar leads and frenetic drumming didn’t take long to whip the crowd into a frenzy, igniting the first mosh pits and crowd surfing I’ve seen since before the pandemic, leaving security nervous and on their toes. Dedicated fans belted out lyrics to favorites from all across the band’s oeuvre, from “Shelter Song,” the defining anthem from their most recent record, to earlier, dirtier, favorites such as “God’s Favorite One.” This glorious, riotous show was a highlight for me.

Built onto the side of the historic Rossio train station, the semi-outdoors Super Bock Super Rock Radio Room hosted the biggest surprise and greatest success of the weekend: British indie-rockers Wet Leg. With only two songs publicly released, no one knew quite what to expect from their 45-minute set — and this being only the band’s second show outside of the U.K.

Needless to say, Wet Leg did not disappoint. Joyful guitar riffs and infectiously catchy, irreverent lyrics poured through the speakers as this group of newly minted indie stars grinned and laughed through their setlist, obviously in awe by the massive amount of people who put so much faith in them after only being exposed to two singles. Having the entire area, band and crowd alike, roaring about chaise lounges during the climactic final song of the set, was surely a cathartic moment for everyone, and certainly the high point of the festival for many.

The festival closed up with a few hours of dancing, with an easy, fun, house and EDM selection from Anna Prior, of Metronomy fame, and Lisbon local Moullinex. The crowd bounced and smiled under the tall ceilings of Coliseu dos Recreios to a wide mix, with lots of local producers and remixes being showcased, along with established international club hits.

As the lights came back on and the DJs left the stage, around two o’clock early Sunday morning, the crowds slowly made their way back down Avenida da Liberdade, back into the rest of the city. Starry-eyed and weak-kneed, with arms around the shoulders of loved ones, everyone seemed to agree that it was good to have Super Bock em Stock back on the festival circuit, and we were all already anxious to see what good times next year’s edition would bring.