When rebuked about not talking enough about her work, the modernist painter Vieira da Silva once retorted: "And what does one paint for? Isn't it to make the canvas speak? The painter's language is the paintings themselves!"

On one autumn evening, an artist was visiting Árpád Szenes and Maria Helena Vieira da Silva at their atelier in Amoreiras. “You work a lot, Madame,” stated the visitor, “and that’s why you don’t even have time to seek for the accurate words to describe those canvases.” Vieira da Silva, without even turning away from the easel, retorted: “And what does one paint for? Isn’t it to make the canvas speak? The painter’s language is the paintings themselves!” 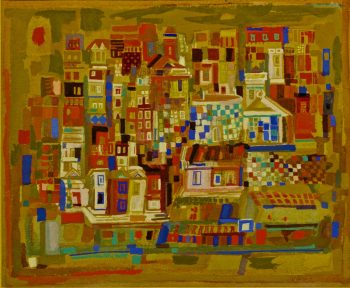 Such an unconditional faith in visual communication may appear strange for someone who could speak three languages fluently and who had been brought up in a family where the beauty of both the written and spoken word was held in the highest regard (Vieira da Silva was the daughter of a Portuguese diplomat and the granddaughter of the director of O Século, one of Lisbon’s most important newspapers). Yet, you only need look at the way in which she spoke about her childhood to understand why she eventually became “the lady of silence,” as Eduardo Lourenço called her, and how, in consequence, her style became both indicative and refined.

Vieira da Silva was born on June 13th, 1908, during Lisbon’s traditional celebrations, when the whole city vibrates with colors, music, and laughter. However, because of her father’s profession, as well as his poor health, the family soon left Portugal to settle down in Switzerland. Christmas Eve spent there became the painter’s earliest memory, and, at the same time, one of the last that would include her father, as he died of tuberculosis shortly after, when da Silva was only two years old.

She and her mother moved back to Lisbon, moving in to a modern palacete designed at the request of the Vieira da Silva’s grandfather. Situated at the intersection of Avenida Fontes Pereira Melo and Rua Latino Coelho, the place was a popular meeting point for the intellectuals of the time — especially ones involved with the Republican movement. For little Vieira da Silva, who had no siblings nor peers (as she was home-educated), this meant being constantly in the company of adults and their incomprehensible conversations or spending time alone in her grandfather’s library, surrounded by books, newspapers, and engravings. In this peculiar labyrinth, she soon found a thread to follow, and by the age of five, decided to become a painter.

Taught to observe things carefully and, at the same time, perceive them in a certain way, she became obsessed with the idea of representing objects as if they were seen from the inside out. Already a student at the Academy of Fine Arts in Lisbon, she enroled in the Faculty of Medicine too, as the study of anatomy appeared to be crucial for gaining a better understanding of the body’s mechanics. This was important for the transition from depicting the human figure to capturing its internal dynamics. Vieira da Silva’s sketches from this period were still naturalistic, but they already showed some of the qualities that would eventually become signatures of her mature style. Among them, the tendency to depict everything with an attentiveness so incisive that the realistic becomes abstract – it’s no surprise that by 1937 Adolfo Casais Monteiro pointed to Vieira da Silva as “the only Portuguese artist who could produce an abstract painting of a notable value.”

It seems that the goals the painter had set for herself crystallized by the summer of 1928 when, shortly before leaving for Paris to continue her studies, she took a trip to the north of Italy, discovering the works of Giotto, Simone Martini, and Uccello. Inspired by their understanding of space, she had soon almost entirely abandoned the linear perspective in favor of flat surfaces that would overlap and intersect one another. Through this method, Vieira da Silva eventually arrived at creating a peculiar visual space, where objects seem to permeate freely – almost as if they were not made of matter, but pure energy that pulsates from the background to the foreground and then all the way back again.

At the same time, her move away from realistic tendencies must have been derived at least partially from the avant-garde movements that flourished at the beginning of the 20th century. For Vieira da Silva, however, these seemed more important as a form of encouragement than a direct inspiration. She had never aspired to join any artistic group, despite being associated with the famous Atelier 17 for many years, and instead used the stylistic features of Cubism or Surrealism as an exercise in expanding her own visual vocabulary. Then, from Cezanne she borrowed a predilection for depicting players and wide-opened windows; from Giacometti, a talent for weaving space out of the most delicate threads; from Picasso, an obsession with the pattern on the Harlequin’s costume; from Joaquín Torres-García, vibrant colors and playfulness of geometrical forms. One of her great inspirations was also the Portuguese art. It’s not by coincidence that many of her canvases look like mosaics composed from colorful azulejos.

Yet the joyful time of living and working in Paris did not last forever. As war broke out, it became a priority to return to Portugal and obtain citizenship for her husband who, being Jewish, needed to seek asylum. This, however, didn’t work out, and by 1940 the couple had left for Brasil. Even though this allowed them to stay together and continue their artistic careers, Vieira da Silva wasn’t happy. Homesick and preoccupied with her family, she slowly fell into depression, which found its reflection in a tendency for using a darker palette and obsessively depicting motifs inspired by Lisbon. This was about to change only by 1947, when the artists finally came back to Portugal.

Upon their return to Lisbon, the couple established an atelier that Vieira da Silva would later describe as “a chapel for spirits, a laboratory for investigations, a meeting point, a house of love.” Situated in the very heart of the Amoreiras Garden, it quickly became a place admired not only by the painters themselves but also their numerous friends (among them, the famous futurist: Almada Negreiros), who would often come by to visit. Nowadays, even in the absence of the extraordinary hosts, the vibrant atmosphere of the atelier can still be enjoyed. Thanks to the efforts of the Árpád Szenes and Vieira da Silva Foundation, the atelier offers artistic residencies, and the neighboring museum takes care of the couple’s outstanding legacy.

Momentous Eventus: November 6th, and so on and so forth.

Tired of seeing and hearing about what’s happening in the America of the U.S. variety while living in constant anxiety about the new normal and the seemingly inevitable next lockdown? We got you covered.

Tim Burton and his Marionetas

The art of stop motion film dates way back to the mid-1800s. Its history is rich and complicated, sprinkled not just with puppets but also with trippy, hard-to-pronounce stuff like

The world-renowned great naturalist painter Banksy allegedly once said: “All artists are willing to suffer for their work. But why are so few prepared to learn to draw?” 19th-century Portuguese

What’s On in Lisbon in October

The shops, cafes, and restaurants have finally returned from their Férias, you aren’t melting as much, and the kids are settled back at school. Finally, you can enjoy some culture. We’ve gathered some of the best art, music, and other events in the city in October so you can plan your visit!

What’s On in Lisbon in September

The tourists have left, the Lisboetas who run the city’s coolest restaurants and clubs are back, and the summer is far from over. September is one of the best months to be in the city — here’s why.

Last Chance to Register: NIGHTMARE AT THE MUSEUM

We couldn’t resist spreading the word about this most excellent idea from most radical dudes and dudettes: MotelX and Museu Arte Antiga. Tomorrow is your last day to register for