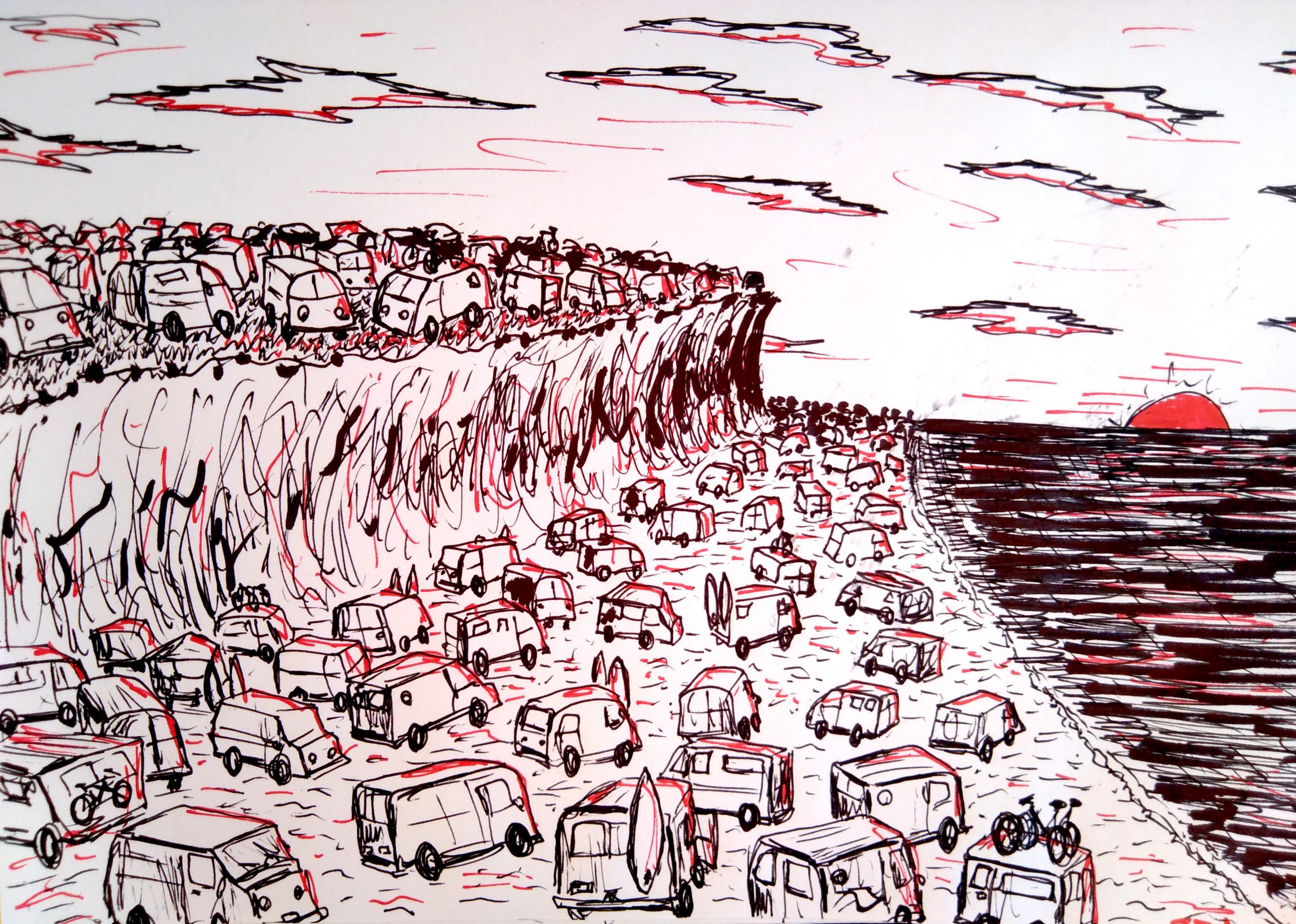 The War on Van Life in Portugal

Hundreds of kilometers of pristine beachfront, much of it away from civilization, sets up Portugal as a prime destination for van life — but many locals aren't too happy, and the police are getting involved.

Drive past any public parking lot within a few kilometers of a Portuguese beach, and you’re bound to spot the evidence of a growing movement.

They come in all forms, from inconspicuous vehicles that could be mistaken for cargo vans — so-called “stealth campers” — to dirt-caked VWs straight out of the ’70s — and then there are the luxurious mobile homes that seem to offer more square meters than the average Lisbon flat.

Whether you call it campismo selvagem, van life, or just sleeping in your car, more and more people are flocking to Portugal to live out their nomadic dreams. The temptation is perhaps even higher in the era of COVID-19; who wouldn’t want to live in a portable apartment that makes self-isolation compatible with travel?

But the easy appeal of van life is not without complications — or controversy. While on the surface it may seem to be a more sustainable and responsible form of travel, concerns have been raised about its effects on the natural environment and local ways of life.

First of all, in Portugal it’s illegal to camp outside of officially designated campsites. In the western Algarve, where wild camping is especially popular, it can result in fines ranging from €200 to €4,000. That said, enforcement often varies by region, season, and just plain old luck.

Wild camping is also subject to specific regulations regarding the coronavirus pandemic. Issued on May 25, Decreto-Lei n.º 24/2020 regulates the access and use of Portuguese beaches following the end of the national state of emergency. Chapter 2, Article 8 states that parking outside of lots and licensed parking areas is prohibited, as is parking caravans and similar vehicles in designated parking areas.

In effect, vans aren’t allowed to set up shop in official parking lots, but they can’t park outside of them either. This makes legal van life virtually impossible beyond campsites, and despite unpredictable enforcement, fines have been issued this summer en masse.

According to Marta Cabral, president of the Rota Vicentina Association, “This year the police and natural park staff are more present, but this is really not enough. People still find it okay; they know they don’t really have to pay the fines (especially the foreign ones) so they move to the next spot and come back the following morning. They take ‘getting caught’ as ‘part of the adventure’ with no serious outcome.”

Judging by the proliferation of vans parked along the country’s coast, plenty of people are willing to take the risk. But who are campers actually hurting by flouting these rules?

According to its detractors, wild camping can destroy habitats and protected ecosystems, contribute to environmental pollution, and disrupt the lives of locals.

In a recent article from The Portugal News, disgruntled residents of the western Algarve complained that inconsiderate campers often leave behind food waste, litter, and burnt patches from campfires. Not to mention a more cringeworthy kind of waste: piles of human feces left on and near trails.

When you paint a picture of this van-dwelling tourist who invades local spots, throws their trash out the window, and poops wherever they please, it’s easy to see why people are fed up. But some argue that this is a misrepresentation, especially considering that the movement often goes hand in hand with concern for the environment and self-sufficiency.

Lisa Müller, a 28-year-old German traveler who’s currently residing in her van in the western Algarve, has been researching sustainable tourism in Portugal for the past several months. She says it’s important to distinguish between different types of van lifers:

“There are the opportunists, who would normally stay at campsites but then see everyone else parking at the beach and think, ‘why not?’ There are the locals who live here full time in their vans, and usually have a steady place to park. And then there are people who come from far away to live cheaply and with more freedom.”

As Lisa also points out, “There are people who are conscious and cautious about environmental protection, but there are also a lot of young people who just see this as a ‘wild west’ where you can do whatever you want and everything is allowed.”

Local residents also vary in their opinions. There’s certainly some resentment that this previously unknown paradise has been discovered by the masses. And therein lies a large part of the problem. Portugal’s surge in popularity over the past several years has led to an imbalance in the number of tourists, the law enforcement professionals tasked with controlling them, and the facilities to support them.

Other residents appreciate the influx of income created by the tourism industry. Even if van dwellers aren’t booking accommodation, they’re part of an overall trend that’s been driving Portugal’s economic growth for years. As the coronavirus pandemic has disrupted traditional tourism, maybe van life offers a convenient compromise.

Then again, this may be a classic case of conflict between economic benefit and environmental destruction.

“More and more companies are investing in vans to sell and rent, renting platforms, etc., because they see this as a great business opportunity,” Cabral says. “We are trying to bring the authorities closer to this big threat to our natural park and the sustainable model we’ve been working on for years, together with hundreds of local people and companies.”

As Portugal’s tourism industry absorbs the impacts of the coronavirus pandemic, the van life trend could either emerge as an increased threat to this work or a sustainable solution. Ultimately, it will depend not only on law enforcement, but also on where the van lifers’ priorities lie.

And Lisa has some advice with regard to the defecation dilemma: “Find a spot far away from the trail. Bring a shovel and bury it. Take your toilet paper with you and throw it away.”

Sometimes responsible tourism is as simple as that.