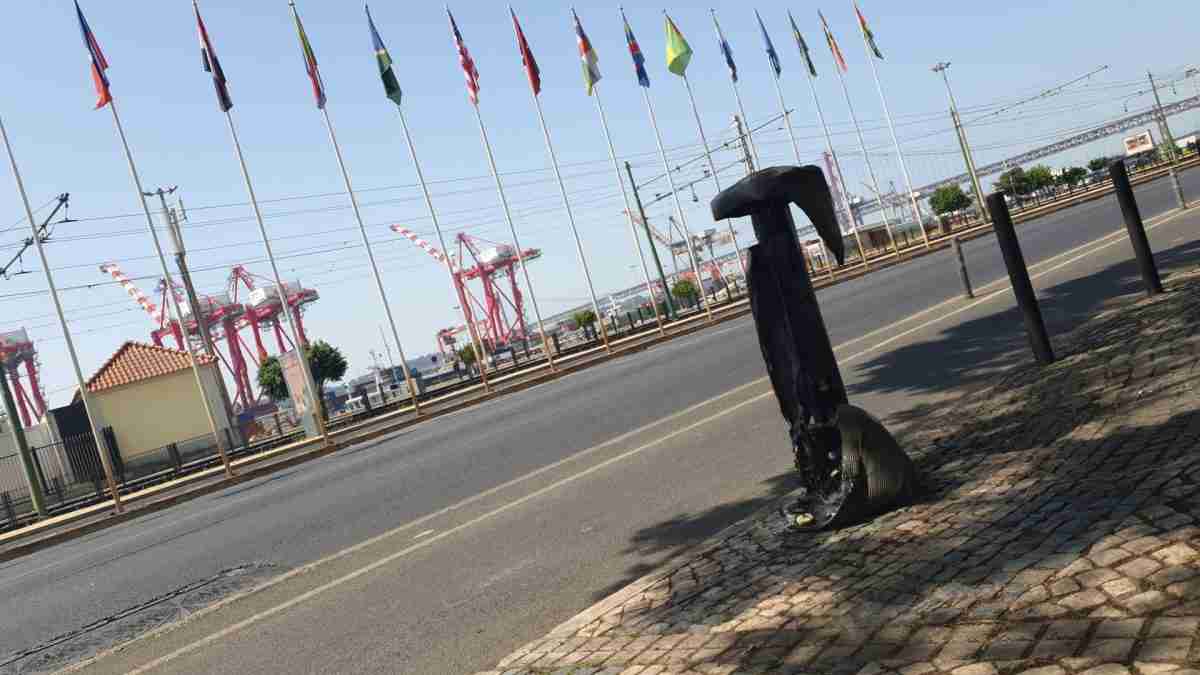 "There may be a great fire in our hearts, yet no one ever comes to warm himself at it, and the passers-by see only a wisp of smoke." Vincent Van Gogh.

Does it seem like there are a lot more tourists, tuk-tuks, displaced electrical scooters, and, strangely enough, burnt trash bins around Lisbon this summer? Or is it just us..? Anyhoo, be careful out there, folks, and stay hydrated — we’re still up in the 30s during high noon for the next few days. In the meantime, here’s some cool concerts and stuff going on around town towards sundown tonight and this weekend, plus some daytime art happening now and all the way through the coming winter:

Jul 22
JAZZ CONCERT:
It seems that this summer there’s also a lot more jazz than usual in Lisbon. Tonight, two Brazilians (a saxophonist and an electric bass player), a Norwegian drummer, and a Portuguese trumpeter who together make up the ensemble VAGA come to Auditório Liceu Camões to play some improvisational jazz for you, yours, and a popular local radio station. Entry is free.

Jul 22-Sept 4 (weekly)
STREET THEATER AND MUSIC FESTIVAL:
The Seven Suns Seven Moons Festival hit Oeiras last month for nine Fridays of 2€ concerts by musicians from 30 cities in 10 different countries. Tonight it’s Cape Verde. Plus, there are free street theater performances and open-air cinema screenings, both for kids and adults, on a few Saturdays and Sundays in between, all through September.

SEMI-FEMINIST CONCERT:
While that’s happening, self-described as “the best group in Campo de Ourique and maybe in the Universe and surroundings” Ena Pá 2000 comes to Titanic Sur Mer with a show entitled Chicks Chicks Chicks (and LGBTQ) and promises to sing songs “with only girls’ names in them.” Also, ladies enter free of charge (no word on the boys).

SEMI-HIPPY CONCERT AND PIZZA:
Brazilian-born local musician and producer Cleison Monteiro presents YIN YANG ! at La Sharada — a song and guitar concert that, accompanied by two friends on drums, flute, and backing vocals, is “colored by mestizo Grooves” and “walks as a voice towards the preservation and harmony between the living beings of forests and cities.” Entry is 3€ (and the pizza is authentic Italian).

ONE-MAN COVER BAND CONCERT:
And also tomorrow night, neither the Latin pop star nor the Portuguese football player who share his name but rather lesser-known local guitar player and singer Marco Matias comes to Cine Incrível to do some “bluesy rock, indie, and pop acoustic covers.” Entry is 5€.

Now through Dec 11
HISTORICAL EXHIBIT:
Atlas’ own editor-in-chief (and, among other things, 1920s fashion connoisseur) recently shot the breeze with the curators of and checked out Lisbon’s Roaring Twenties exhibit at the Museu de Lisboa, and it seems that this journey back in time is well worth a visit or two. Tickets are 3€.

Now through Jan 8
ANOTHER HISTORICAL EXHIBIT:
You know that dude on a horse in Praça do Comercio, aka one of the most well-recognized symbols (well, with the background, that is) of this fine city? Well, that’s King José, and José didn’t invite the man who made him immortal, as well as a bunch of other iconic stuff all around town, to its inauguration. However, 200 years after his death (and all year long), Museu de Lisboa is honoring said man and his contribution to Portuguese art, history, culture, politics, and selfie opportunities with Machado de Castro in Lisbon: The Laboratory of Sculpture. Entry is 3€.

You can find plenty more cool stuff happening around town next week, month, and onwards via our events calendar. Have a good weekend, and keep that heart fire burning bright, dear Lisbon.