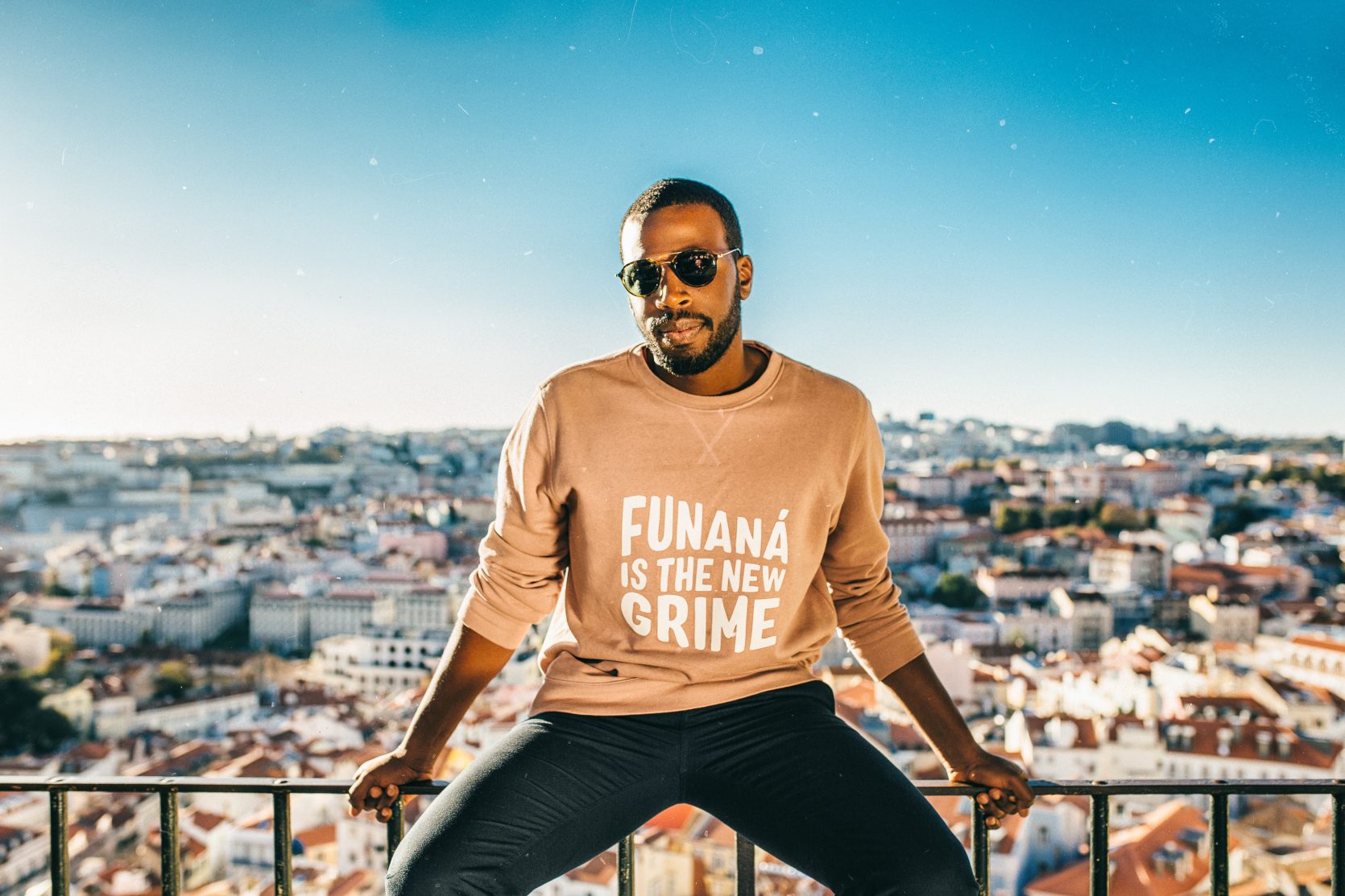 Nova Lisboa: Musician Dino d’Santiago Is Creating a New World, and We’re Already Living In It

There’s something happening in Lisbon. Earlier this year, Rolling Stone published back-to-back articles touting the latest to come out of Portugal’s capital city. First, the imminent release of dominant electronic DJ and producer Branko’s second solo album, Nosso (meaning “ours”), which dropped last week, and second, boldly proclaiming that Lisbon-based singer Dino d’Santiago is bringing funaná, a traditional Cape Verdean music and dance genre, to the world. The sounds of Lisbon are making their way across the Atlantic, and the Portuguese music scene is poised to explode. But what’s behind the boom? We sat down with Dino, who is on the leading edge of this transformational movement, to talk about why right now is the best time to be a music fan in Lisbon.

If you aren’t familiar with Dino d’Santiago, we recommend you get to know him immediately. The musician released his exceptional fifth album, Mundo Nôbu, in October of last year — it was ranked as one of 2018’s best and set the stage for an Afro-Portuguese takeover. It’s a soulful, sophisticated journey through the Lusophone countries that is sung in both Creole and Portuguese, and Lisbon is ready for it. Dino introduces the concept of Nova Lisboa (“New Lisbon”) on a track of the same name that has quickly become an anthem for Lisboetas, provoking a sense of heartfelt pride that radiates from the crowds of fans who sing along at every show.

“I see everybody else singing, and I know this doesn’t belong to me anymore. This is an album from the city,” he says.

To understand the music scene in Lisbon, you have to understand the city’s relationship with Africa — specifically, places like Cape Verde, Angola, Guinea-Bissou, and Mozambique, Dino explains. Officially, there are six African nations that were once colonized by Portugal, building bridges across which people (including those taken by the Portuguese slave trade in past generations), language, and rhythms travel. These nations are collectively known as the Lusophone countries, and the beats of their cultures have collided in our small city, fueling what Branko and Dino are calling the “Sounds of Lisbon” — an otherwise uncategorizable genre that fuses a wide variety of Afro and electronic beats with hints of hip-hop, funk, soul, and more to create a unique, infectious sound.

The new Lisbon is largely built on these vibrant, varied African roots. “You go to Mozambique, you have the Marrabenta. In Angola, you have the Semba and the Kuduro — the hip-hop version is the Kilapanga. Then, in Cape Verde, you have the Batuka, the Funaná, the Morna, and all of those sounds. [Lisbon-based] DJs like Branko, Progressivu, PEDRO, they bring it all together with the zouk and ghetto zouk. They’ve transformed all of the traditional sounds,” Dino explains. This transformation actually began in the mid-2000s, when Buraka Som Sistema, a Portuguese electronic music group that included Branko as well as Kalaf, the executive producer on Mundo Nôbu, began blending Afrobeats with techno. Carlão, formerly of Portuguese hip-hop group Da Weasel, was also a major player. “He was the first one dropping in a Zouk and Kizomba beat. Before, Kizomba wasn’t cool. Cool people didn’t listen to Kizomba. And that was the start of assuming our sound. Now, the way Latin people are transforming reggaeton into something more ‘cool,’ like trap, it’s the same thing we did with Kizomba and Funaná and Kuduro.”

Those traditional sounds and their accompanying dances have made their way to the forefront of Lisbon culture from the outskirts of the city, in places like Amadora, where d’Santiago lives and where social housing was built in past decades, largely to house African migrant communities. “When the government invested in housing, everyone mixed: the gypsies, the Angolans, the Cape Verdeans, everyone. The only way you’d know where someone was from was to go to their house and eat,” Dino says. The establishment of these communities also contributed to a cultural divide relative to Lisbon’s city center that is still very real today, but we are finally seeing some of those barriers break down through music.

The blend of African and Portuguese cultures is the undercurrent that is propelling this movement forward — and it’s something that, according to Dino, sets Lisbon apart from major music hubs like New York City, Paris, and London. “In Lisbon, everyone is mixed. It’s a collision of flavors. I think Lisbon should be a case study for other big cities to learn how to develop the cultural scene,” Dino says. “The new Lisbon isn’t one culture or the other; everything is important.” He points to the example of Conan Osiris, a singer with gypsy heritage whose sound is an eclectic, futuristic fusion of everything from fado to hip-hop. “He was inspired by Kizomba and Kuduro; he represents the transformation.” (He’s also now representing Portugal at 2019’s Eurovision Song Contest.) “Then you have [rapper] Pedro Mafama, who brought the sounds of traditional fado — the lyrics and the melodies — and transformed them, by mixing them with hip-hop and Afro sounds.”

Lisbon’s unique connections with Africa are the fire beneath this cultural melting pot, but they’re by no means recent developments. According to Dino, a key ingredient is the attitude and mindset of today’s younger generations.

“The main secret, to me: our generation is really open. Black culture and European culture have combined, and people are really open to collaboration. You can see that people are really hungry to absorb it. In Lisbon, you have people from six different African countries, you have people from Brazil; Spain is so close, and in Spain, you can learn everything about the Latin scene. And you’re so close to Cape Verde, to Angola, Morocco is right here… The strategic position of Portugal and the openness here is what helps move everything forward. In recent years, smart people [producers] came to live in Lisbon, and they helped expand the sounds. Lisbon is a small city, so it’s easy for you to show everyone what you’re doing, and it’s easy to collaborate. There are less labels. Here, people want to mix everything.”

Outside of Portugal, African sounds have been adopted by mainstream artists in recent years, indicating a global readiness for the next phase of this evolution. To name a few, Beyonce hired Tofo Tofo Dance Group from Mozambique to teach her their native dance moves for her “Run The World” video, Drake has collaborated with Nigerian Wizkid on multiple tracks, Soulection member Sango dropped a catchy Kilapanga remix of Kendrick Lamar’s “Big Shot” last summer, and now Madonna — herself a resident of Lisbon — is rumored to have incorporated these traditional rhythms into the album that she is expected to release this year. “She will kill it with this new album. I’m just waiting to see what happens,” says Dino, with a knowing smile.

Still riding the wave of Mundo Nôbu, Dino has big plans for his next moves. “In this album, I only explored three rhythms: the Batuka, the Funaná, and the Kizomba. Just in Cape Verde, I have five more rhythms to explore. Then, I go to Angola, and I have even more. And Guinea, even more. This is a start, but there’s no end. I can even imagine going to Brazil and transforming the funk into something more sophisticated. I’ll be doing shows here [in Portugal], then Angola, Brazil, and Mozambique, and now, the movement is coming. My dream was that this album would open the doors to the Lusophone countries because I was inspired by that culture. Those doors are now open.”

Beyond Dino’s personal ambitions, Mundo Nôbu is representative of a larger push toward defining the Lusophone sound within the global music scene. “It’s possible for what is happening in Lisbon to impact the scene outside of Portugal. I took this as a purpose: at the beginning, the conversation was, ‘If it’s only to do music, we can do it our way. But if it’s to create a movement that people will understand, it’s for the Lusophone scene. Brazil is one place, Angola is one place, Mozambique is one place, and Portugal, and Cape Verde, but no: let’s be as one. One nation. And that nation will define one sound that is unique.’ And that’s what I started doing with my album.”

There are plenty of opportunities to get out and experience these energetic, ever-evolving rhythms for yourself: the Enchufada music label, fronted by Branko, hosts a monthly Afro-electronic dance party called Na Surra at B.Leza Clube, and the label Príncipe, which represents artists from the aforementioned peripheral projects of Lisbon, hosts a monthly show at Musicbox called Noite Príncipe with a rotating lineup of raw, local talent. The artists and collaborators attached to each label, which represent two essential pillars of the scene, can be found in clubs throughout Lisbon. Other Lisbon-based artists to watch include Carla Prata, a young Angolan rapper whom Dino refers to as a game-changer, and Mayra Andrade, a contemporary Cape Verdean singer who recently performed to a sold-out crowd at Cineteatro Capitólio.

What you do next is up to you, but Dino’s invitation to the people of our city awaits: “Vem, sente, sente, sente esta nova Lisboa” / “Come, feel, feel, feel this new Lisbon.”

Catch Dino d’Santiago at ID No Limits Festival in Estoril on March 29-30, on multiple stops of Branko’s European Nosso tour this Spring, and at NOS Primavera Sound in Porto on June 6-8. Follow him on Instagram for frequent updates on shows and more.