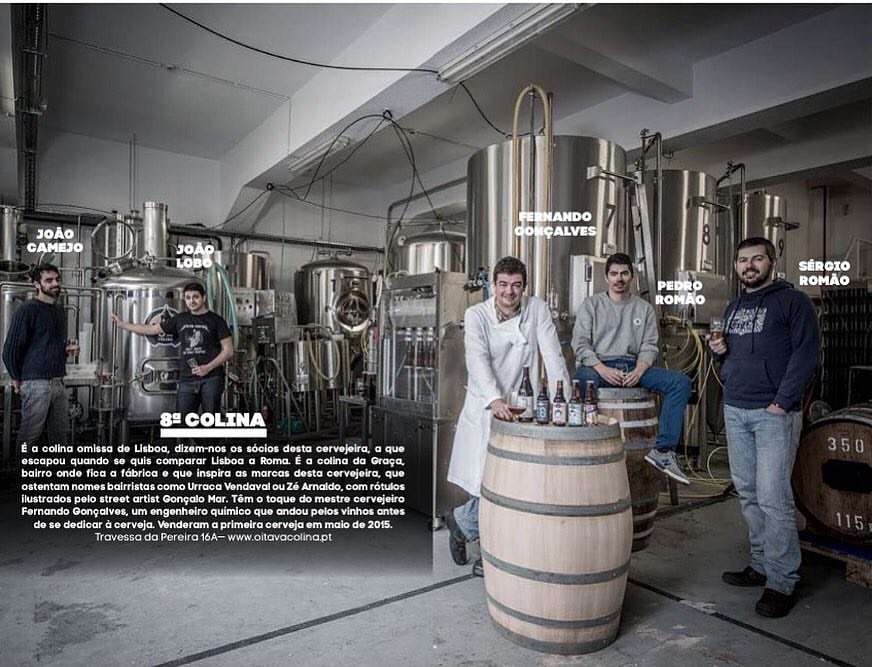 What’s Brewing at 8ª Colina: A Q&A With Pedro Romão

These unfiltered beers have taken Lisbon by storm and soon, the company plans to open up its own Quiosque 8ª Colina to better introduce them to the rest of the hills around town. We met one of the founding brewmeisters himself, Pedro Romão, and asked him to tell us his story.

Lisbon was named “the city of seven hills” by Frei Nicolau de Oliveira, in the 17th century. You might be saying, Hey, wait a second, I know I’ve walked up more hills than that! And you’d be correct. When viewed from the sea, Lisboa appears to have only seven hills — but the eighth one hides behind the Castelo de São Jorge.

It was an honest mistake, but the name stuck.

Six years ago, this hidden hill known as Graça inspired the name of Atlas’ favorite beer, Oitava Colina, whose beers are anything but hidden. They opened a micro-brewery in Graça’s own Vila Berta and have been expanding ever since. You can find their beers at most craft beer spots around the city, and now, more and more restaurants are jumping on the artisanal brew bandwagon, so their reach is even more widespread.

Their four distinct flavors (APA, porter, IPA, and lager) are produced exclusively from malt, water, hops, and yeast and have been inspired by characters from the area. Each beer has its own name, charisma, sense of humor, quirks, and even character flaws, which, aside from the taste, is why they are so appealing. These unfiltered beers have taken Lisbon by storm and soon, the company plans to open up its own Quiosque 8ª Colina to better introduce them to the rest of the hills around town.

We met one of the founding brewmeisters himself, Pedro Romão, and asked him to tell us his story. Here’s what he told us:

How did 8ª Colina get started? What was the eureka moment?
I read in the newspaper somewhere that it was possible to brew beer at home — this was back in 2011. It all started from there. I bought brewing materials and got going. The eureka moment was when I understood that from my home I could brew an enormous amount of different beers, so I let myself imagine what I could do with a real brewery.

I googled some recipes (of course) and saw hundreds of different ones. Meanwhile, at all the Portuguese supermarkets, there were meters and meters of shelves full of only industrial lagers. That was when I understood the market needed something different.

Where did you get your inspiration? Is there a beer out there that helped steer you in the direction you wanted to go?
We get inspired by good beer, all the time — and there are a lot of really good beers out there.

Aside from the beer itself, the labels you have created are very impressive. What’s the story there? Who is the designer and how did you hook up?
We managed to get the urban artist Gonçalo MAR to work with us and he did a great job giving visual life to Urraca, Zé Arnaldo, and the other characters. We created the story of each character and of the eighth hill ourselves, though.

If you could pair a traditional Portuguese dish with each of your beers, what would you choose?
Urraca: Something spicy and a mild cheese
Zé Arnaldo: A strong cheese and a nicely cooked meat
Florinda: Sushi and a salad
Joe da Silva: A burger and/or a steak

Was it a struggle to get Portuguese beer-drinkers off of their beloved imperiais? Did you have to do a lot of convincing or did it happen naturally?
Our mission since the beginning has been “to change the beer environment in Portugal.” We are proud of the job we have done over the last three years (we are celebrating our third anniversary in January), but it’s still an everyday struggle. It hasn’t been easy and it’s required some patience and persistence.

What’s the place you go to get inspired or to re-charge after a long day?
We live a noisy, fast-paced lifestyle these days, so personally, I like to go home and relax with family.

What’s been your biggest achievement to date?
We now have seven full-time workers here, and we’re hiring the eighth. That, for me, is simultaneously the biggest achievement, my greatest happiness, and a welcomed responsibility. Of course, we want to keep growing like we’ve been doing ever since the beginning, all the while keeping high-quality standards.

If you’re looking to meet the makers and get better acquainted with their bottled cast of characters, you can visit their tasting room. Each visit is one-hour long, costs 10€, and has a maximum capacity of 15 people, so reservations are required. Just email geral@oitavacolina.pt to get started.