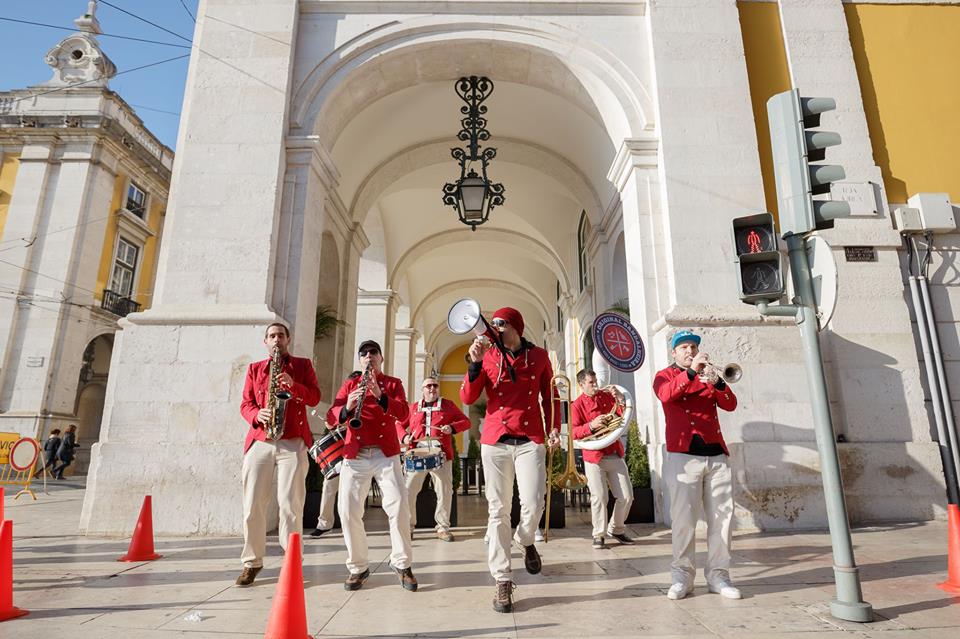 When not playing a club, Bandalheira often pops up out of nowhere to play a street corner or a metro station, although they rarely stay put. A few songs in, Bandalheira usually takes the show on the road, with throngs of dancing new fans following along. When we found out that the group is all Portuguese, we had to find out what’s up.

“We started sharing songs that we liked with each other, from ska to reggae, punk to funk. And in 2007 there was an east Gypsy music boom in Portugal, which came mostly to us via Fanfare Ciocarlia,” he says.

“In this music community, we started to play some of the songs that we liked, and someone asked if it wouldn’t be great to join two interested groups — inside and outside musicians — to start a world music project,” Saraiva says.

Atlas: Why the Balkan direction?

Saraiva: We played wind instruments — trumpets, trombones — and Balkan sounds were a real inspiration. All this festive music. However, from the beginning, we wanted to play music from all over the world, so we did not limit ourselves to Balkan music.

S: Almost 30 people have passed through Original Bandalheira. Some leave and others come back, depending on the availability and the other projects of each one. Currently, it’s

Our band has, or had, engineers (all kinds), security guards, cops, nurses, students, military musicians. This is our professional hobby.

We treat this project very seriously, but we are also a family of friends. Most of us grew up with the band: Pedro was 14 years old when he joined, for example. We had a bunch of ups and downs, but the most important thing is to invest in the relationships motivating people to improve their skills.

A: Can we buy your album somewhere?

S: We tried a couple of times to release some albums, but we have no time to finish them, sadly. We have made a couple of commercials.

A: How often do you go out on the streets of Lisbon?

Initially, our band made spontaneous appearances on the streets, but we quickly began to receive requests to do events, public and private, and we did not have time to storm the streets of Lisbon. Whether it’s on stage or on the street, there’s usually an invitation, and so we also avoid some legal issues …

A: How much time do you spend on the road away from Lisboa?

S: No more than a weekend. It’s better this way, due to our jobs and responsibilities. But we have been to most of the main Portuguese cities, from south to north.

A: What has been the reception hearing Portuguese musicians play Balkan sounds?

S: When we play Balkan music, the audience acts very intrigued. But since these are party songs, happy songs, they usually start smiling and dancing.

A: Have you been to the Balkans? Have you met or played with any of your influences, such as Goran Bregovic or Emir Kusturica & the No Smoking Orchestra or Fanfare Ciocarlia (they are our favorites too).

S: Some of us had already visited the Balkans, yes. But only Sara Toscado, a dancer who was with us, had the opportunity to dance with Boban Markovic and his band. Awesome.

A: What is the social aspect of your band in regard to the Roma community? In many countries, the popularity of bands such as Fanfare Ciocarlia and Emir Kusturica (as well as, of course, his films) have highlighted the difficulties faced by the Roma community with the population at large, and helped start a dialogue on the issue. Do you think your music had any effect on the way the Portuguese Roma are viewed? If so, how?

S: Portuguese Gypsy music has had difficulties in succeeding.

Roma communities throughout the world suffer mostly from problems of discrimination, having a bad reputation, but this is due to groups within these same communities that contribute to a negative image.

The magic of music is that no matter the community or the ethnicity, if it is well played and contains a message with which people identify, there will be no discrimination and everybody ends up enjoying it.

Tonight (June 2), Original Bandalheira is doing an early kick-off for the Santo António festival, at 19h30 at Arraial dos Navegantes. Tomorrow (June 3), the band will play from 14h to 16h at the Festival Beer Pomenade Cascais in the gardens by the Estoril Casino.