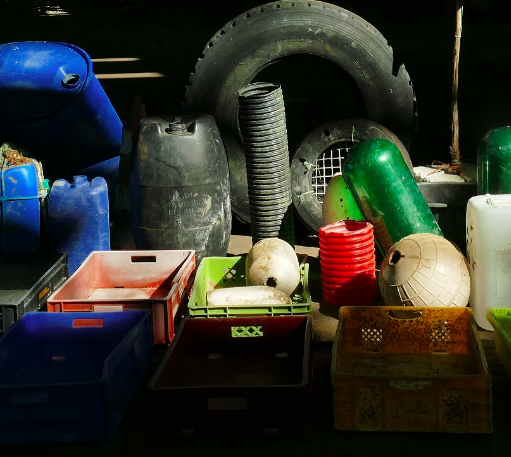 Over Flow: A Suffocating Reminder

If you smoke cigarettes like I smoke cigarettes — and care about your planet slightly more than your lungs — then you may have been faced with the minor dilemma of standing with a cigarette butt in hand and no ashtray or trash bin in sight. Those little cellulose acetate vestiges of joy can take up to 10 years to biodegrade. Granted, if they make it to the ocean, it’s about 18 months. But still…

The ocean, if you will, is Earth’s lungs. We need it to breathe. And Earth is coughing up some serious funk lately. Watch Midway, A Plastic Island to learn how many lighters and bottle caps a bird can eat before it dies, for example.

If birds overflowing with human garbage is too much for you to stomach, you can submerge yourself in Japanese artist Tadashi Kawamata‘s new piece “Over Flow” at MAAT.

For one year, Tadashi followed Portuguese volunteer environmentalist organization Brigada do Mar, helping them rid the country’s shores of trash. He then used some of this trash to make “Over Flow.” So Tadashi is basically recycling.

The piece is described by the museum as “a sculptural form that evokes the polluting elements aggregated by the perpetual movements of the ocean, as well as global tourism and its fatal consumption of natural resources.”

MAAT’s main oval room is the setting for the piece. It’s an open area past the ticket counters. A long half-oval walkway to the left curves downwards to the bottom floor; then a set of stairs on the right completes the oval and brings you back up, to the exit.

My ticket gets printed, scanned electronically a mere two meters away from where I bought it (why print it in the first place?), and returned to me, presumably for recycling. I come up to the walkway’s barrier expecting to see something special, as you would at a pleasant seaside overlook. What opens up to the eye is colorful — but difficult to call romantic. It looks like a massive still ocean wave. Except I can’t see the water.

I meander on, examining the wave in detail. Although the chaos seems natural, the sight is overwhelmingly human. Globalization comes to mind, as does capitalism. Here and there I glimpse some texts: serial numbers, hand-written enigmas, or “U.N.,” for example.

I get to the lower level and dive headfirst into “Over Flow” in all its glory. The people look like vertical, out-of-place fish. There is a slanted boat poking through the plastic surface, and another boat stranded on the “ocean floor,” in the more shallow corner.

There is a calming ambiance here. It feels like you’re underwater, being reassured by our other natural friend — daylight. The massive patchwork of shadows on the walls and floor intensifies this surreal effect. There’s an impressive number of artists. I study some of the trash up close, spot a Coca-Cola can, and feel at home. However, if the wave above me were to suddenly move, I think out of the blue, I would need to come up for air. It’s both cringe-inducing and beautiful.

I exit, light a cigarette and look over the river Tejo; it stretches out and glistens peacefully under a clear blue sky, flowing into the ocean to my right. I see no packaging. What’s it all about? Fortunately, there’s an ashtray in front of the museum.

Sixteen days after “Over Flow” opened, the European Parliament voted to put a ban a range of single-use plastics. This is a coincidence. Eco-friendliness is big business, after all. But if the exhibit tells us anything, it’s that it will take a lot more than politics to ensure that future carbon dioxide-producing generations have somewhere nice to swim, and, more importantly, that Earth continues to have a properly functioning set of lungs.