In a well-lit room, a man sits on the edge of a bed. Around him, two women — daughter and wife — struggle to pull a jacket over his inert body. By a window, another child stands, with hands folded as if for prayer and her gaze fixed somewhere outside the canvas. In the background, Saint George is fighting a dragon. Just below him, a stork is trying to pull out a bone that’s stuck in a wolf’s throat. In Rego’s “Family,” painted in 1988, narration seems to be set right on the crossroads: poses and gestures are ambiguous and the setting is strangely unreal. 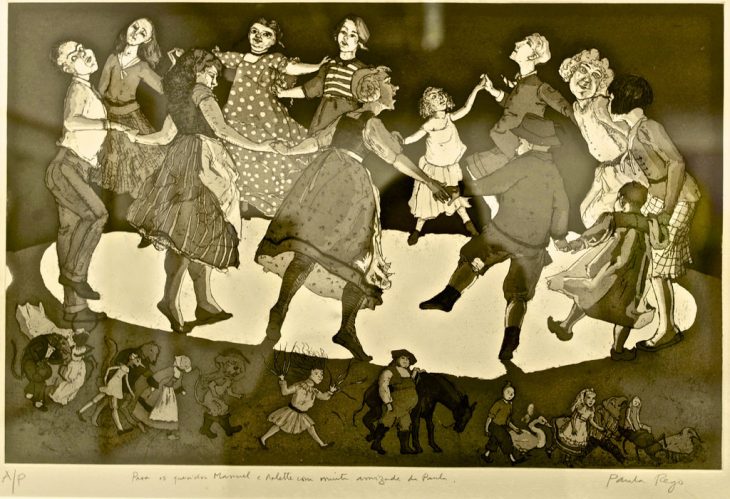 Like a seasoned storyteller, she leaves the viewer with more questions than answers. Who are these people? What happened to the man? What are the women’s intentions? The story unfolds only in the viewer’s eye as they slowly unwrap it from the uncanny feelings the painting causes.

Born in 1935 to a middle-class Portuguese family, Rego was lucky enough to receive a good (if not rather unconventional) education. Being an Anglophile, her father not only introduced Rego to the marvels of British nursery rhymes but also organized private language lessons. As a result, by the age of 10, Rego was already speaking fluent English and soon started attending an international school.

Being an only child, who, until the age of 3, had been raised mostly by her grandparents, Rego had very little interest in playing with other children. Nor did she like being outside. The safest place, as she remembers, was always her own room, where the toys and books were stored. Interestingly enough, that’s also where most of Rego’s paintings would later be set.

She only became interested in painting at the age of 14 when her father gave her Fantastic Art: Dada and Surrealism. Inspired by the works presented in the book, Rego started creating her own collages. Then, encouraged by her mother, Rego used them to decorate the family’s house in Estoril.

In the early ’50s, Rego presented a portfolio at the Slade School of Fine Art in London. Her artwork wasn’t well received, but one of the professors, William Coldstream, took mercy, allowing her to study part-time. He justified his decision to the other committee members by saying: “Oh, never mind, she’ll go off and get married quite quickly. It won’t make any difference.” However, Coldstream’s words were far from prophetic: Rego not only stayed at Slade but turned out to be a gifted and highly motivated student.

It was at a party organized by fellow students that she met Victor Willing, her future partner and the most perceptive commentator of her work. They got married in 1959 and soon moved to Portugal, where they stayed until the mid-’70s, taking care of Rego’s father’s factory and her grandparents’ quinta in Ericeira. By 1961, the couple already had three children, all with British passports but raised in their mother’s homeland of Portugal.
Rego’s first solo exhibition took place in 1965, at Sociedade Nacional de Belas Artes in Lisbon. It wasn’t a big show, and only three works were sold, but, as the event received quite a lot of attention, it helped to establish Rego’s position in the art world. It also allowed her to clarify her goals. When asked by a journalist why she painted, she answered very seriously: “To give fear a face.”

The following years brought a great development on that matter. The end of the dictatorship saw the family business that Rego and Willing were so desperately trying to hold on to slowly fall apart. Not able to keep it, they decided to move back to London. The change triggered Rego’s need for new subjects to work on. Tired of making collages — of drawing, cutting, and reconfiguring elements in order to create a proper composition — she also started looking for a new medium. It was at this time that Willing, already seriously ill, told her a story of a toy theater that he used to have as a child. The theater had only three characters: a bear, a monkey, and a dog with one ear. Rego found it extremely endearing and decided to create a series of drawings in which she would use nothing but these three specific animals. In order to give those representations a more spontaneous, crude character, she chose to work directly on the canvas, filling them with rough, expressive brush strokes.

The experience of depicting human drama through animal characters made Rego realize that such transfiguration allowed her much greater freedom. There’s no risk of humiliation and, at the same time, even the most intense emotions remain far from melodramatic. This notion became crucial for the Dog and the Girl series, created in response to her struggle with Willing’s terminal illness, as well as for the later graphical work inspired by popular nursery rhymes.

By this time, Rego can already be seen as an incredible storyteller. Using means that by themselves appear innocent and inoffensive, she manages to build up extremely dense and disquieting narrations, often choosing cultural and social taboos as her subject matter. In such manner, Rego allows herself to shake the viewer without shocking them and talk about the forbidden without ever showing it.

Such an ability became particularly important in 1998, when, outraged with the results of a national referendum on abortion, Rego decided to create a series dedicated to this issue. Even though her works are imbued with pain and terror, they are far from being either drastic or obtrusive. The message they convey is moving and persuasive, which proves their value in regards to such a controversial topic.

Throughout the years, Rego’s work evolved into modern folk tales, where personal meets universal and the perceived merges freely with foreseen. On her canvas, real characters (like Willing, Lila, or even Rego herself), constantly transmute, becoming generic figures such as monkeys, wolves, mothers, or little heroines. Then, they begin to inhabit real places, which, little by little, fuse into a single setting. Finally, the complex narration fits itself within the frames, making even the most horrible story bearable (if not strangely appealing). The universe that Rego presents is uncanny and threatening. And yet, like in every bedtime story, it allows viewers to believe that everyone lived happily ever after.