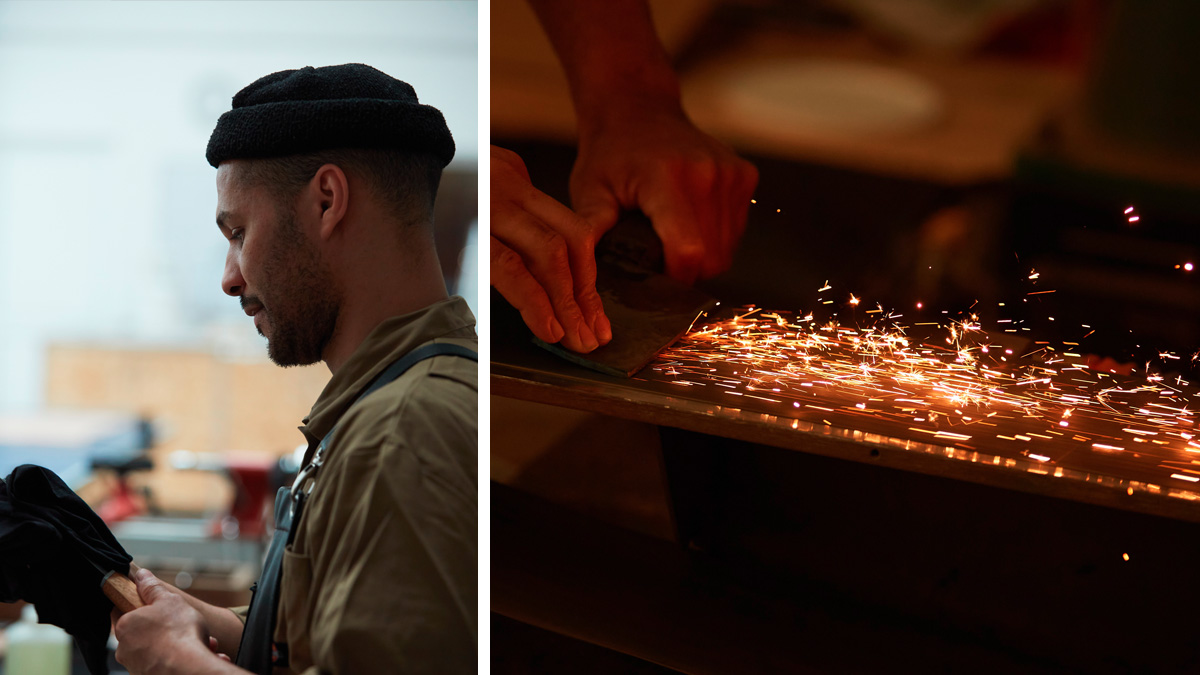 Afiôd is the brainchild of Paulo Piedade: artist, chef, and all-around creative soul. His new foray into knife-making comes after years spent helping other creatives achieve their visions. Now he has struck out on his own to create beautiful yet functional kitchen knives.

On the Afiôd website, Piedade describes the times when his father would return from cargo ships in the Netherlands where he worked as a cook. “I remember my father…[would use] the kitchen for an improvised workshop, to repair and build things that I now value so much. As he sharpened his knives or cut and assembled pieces of wood, as if they were pieces of a puzzle, I watched him. Time stopped.” This would generate in him the desire to create knives for those who cook out of love, for the simple gesture of serving others. According to Piedade, “there is no more noble gesture than cooking. A good cook is a doctor and eating well is the best medicine.”

We wanted to get to know Paulo and find out more about knife making in Lisbon, other craftsmen working in the field, what hardships he has faced, and how he has come to grips with steel.

Your family is from Cape Verde — How and why did you come to be in Lisbon?

Cape Verde was once a Portuguese colony that proclaimed its independence on July 5, 1975. My father and mother came to Portugal in 1978 and ended up living between Portugal and the Netherlands. They stayed for a while on Janelas Verdes and then moved to Oeiras during which time my older sister Carla, myself, and my younger brother Ricardo were born. I was born in Oeiras, but my heart is entirely and without a doubt Cape Verdean — Creole. Now, I live in Carcavelos and I have Ancor Studio in Barreiro, which I share with my brother, Ricardo, AKA artist Blac Dwelle, and my cousin, artist Fidel Évora.

On the Afiôd website you talk about your mother and father being inspirations for your work, and now you have two daughters of your own. What memories do you hope they take from you as a craftsman?

Yes, my mom and dad are undoubtedly responsible for the work I do today — their legacy and way of living is my moto: cooking food for 5 – 10 people almost every day, simply because they wanted to, because they loved the kitchen, and because family is the most important thing.

My daughters (Malu and Eva) will have their time to decide the memories they want to keep. They have already been to the studio a few times. In the previous studio we had, Eva made some carnival masks with a colleague — it was so funny to see how they made them. Malu just came to the studio and played with a few ping pong balls. The memories I want them to have are that they have always been encouraged to be as independent as possible.

Correct me if I’m wrong, but you used to work with VHILS on his team. What did you learn from that experience that you have translated into your new artistic adventure?

Over the last 10 years (with VHILS), I was never competitive but I never gave up. I learned a lot about determination, objectivity, and perseverance — I took a lot of regular beatings in the artistic arena but I had a lot of fun. Good times some good friendships have endured until today. After the leave of absence with the new baby, it was difficult to reconcile the studio with my job: I would wake up at 4am, arrive at the studio at 5am, and start to set up my tools, machines, and work desk. At 9am I went to work and at 6pm I went home. I left VHILS’ studio in December last year and now I am just making knives.

Why steel? What made you decide to get into knife-making?

I’m not sure yet, I’m still trying to find the relationship. It has something to do with cargo ships and destroyers. I love their shapes — I think they are magnificent probably because we often went with my father on some of his boats when they docked in Figueira da Foz. In fact, if you turn around the Afiôd knives, you can see shapes of boats. I can’t explain it well because I’m not yet a cutlery expert — I’m learning a lot and sharing opinions with cutlery experts in order to learn more. There are some very good Portuguese knifemakers out there, like Cardoso Knives, Verissimo Knives, Virgilio Sampaio, and Marco Neves Crafts. This profession is magnificent because you can talk to cutlery artists and bladesmiths in a non-competitive environment…There is room for everyone.

What is your most prized knife or set of knives to date? Was there a particular inspiration for it / them?

This first batch I call Exercicie. I learned to do everything: I learned to make mistakes and correct them, like using the steel that is the most suitable (because there are steels that oxidize more than others) like stainless steel or carbon. I sourced the wood… from a great supplier who is also a best friend. Other knifemakers advised me on the steel that I should use for Afiôd: 52100 (low-alloy steel), AEB-L (a type of stainless steel), and Sandvik 14C28N (hard knife steel) blades. The great master Jorge Aguas, a maker of the highest category, helped me out with several setups at Ancor Studio and I also got help from Fabio Cristofolini, the master of knife sharpening. Everything is flowing well and it is happening so fast. And well, when it comes to cutlery, when it doesn’t go well, you just have to turn around, there is a solution for everything.

You mention that food is medicine. Where do you go to pay a visit to the good doctor?

In general, my partner Laura and I make it a point to go to Souldough Colares because they have the best pizza and now some vegan organic options. Artisan Chef’s Table has amazing sourdough bread and vegan nut cheese and I strongly advise Mala Madre Food. My beloved partner Laura is a top chef, mamma mia, so in my case, there’s not much of a need for restaurants!

How can people purchase your knives? Do you accept custom orders?

You can purchase Afiôd’s knives via Instagram DM (@afiod_) and online here (www.afiod.com) via the Contact section.