Digging in Bins: The Record Shops of Lisbon

For lovers of vinyl, Atlas has compiled a list of the best places to get records in Lisboa. Whether new releases, oldies, or anything in between.

As people pilfer the past, vinyl sales are on the rise. They are still nothing compared to what they once were, but, quite amazingly, record sales are giving MP3 downloads a run for their money. In fact, the sale of physical albums (which includes CDs) has outstripped digital mediums for several years.

So, for the audiophiles and lovers of vinyl, Atlas has compiled a list of the best places to get records in the city. Whether you search out new releases, dig for oldies, or peruse the shelves for that first pressing of Abba’s Waterloo, there is sure to be something for you.

Fear not the name, this is probably the number-one spot for vinyl records in the city. The market runs on Tuesdays and Saturdays and is normally teeming with tourists, but luckily most of them can’t fit large stocks of vinyl in their bags.

Feira da Ladra is a flea market, and thus a cracking place for buying secondhand records. This also means you can get them cheap! The variety and higgledy-piggledy nature of the stalls means that it is a great place for digging. In fact, you will almost certainly have to dig, but this means that you can find some hidden gems!

There are many 45s, often from Brazil and Portugal, and if you aren’t too knowledgeable, our resident vinyl whizz-kid Emmet recommends taking a portable player. This will also allow you to test for quality, as vinyl can be scratched.

This being a market, you have the ability to barter. If you buy in bulk, you are likely to get a better price. And, not that we should have to tell you, but learning a little Portuguese goes a long way.

Some of Lisbon’s record shops also head to Feira da Ladra to sell their wares, and they normally hang out in the middle section (this will make sense when you arrive). Record stores mean record-store prices, so if you’re looking for something cheap, head further down.

From the cheap to the not so cheap. When heading to this store, expect to pay for what you’re getting. But, what you’re getting is always good. Nuno, the owner, only sells records of the highest quality, so you can guarantee no scratches or other unexpected troubles.

Like many of the record shops in Lisbon, this store has a lot of old rock. There is also a great selection of Portuguese ’80s synth-pop, so if that’s your thing, you’re in luck. There isn’t a designated listening station, but if you ask, Nuno will pop your record of choice onto the store’s turntable. Also, he is great to talk to.

Situated in the ever-hipper neighborhood of Intendente, it’s easy enough to drop in on your way to one of the cafes. However, if you don’t head out that way, Books & Records Megastore also pitches at Feira da Ladra. 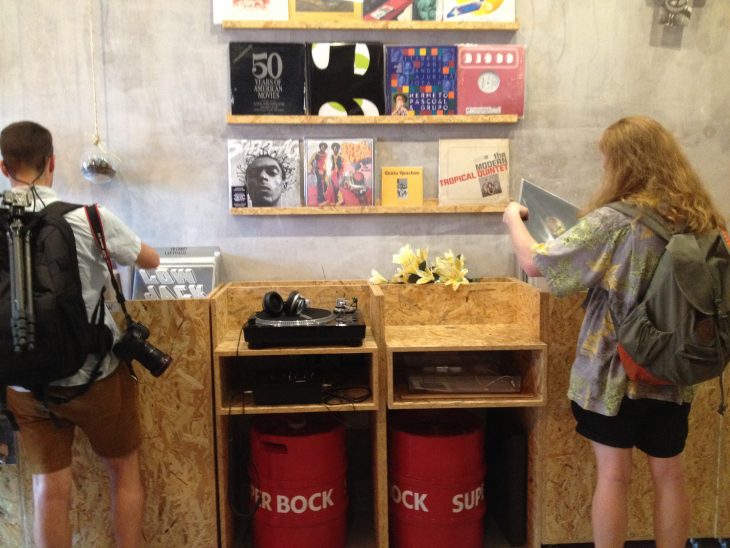 Between Santos and Cais, this gem of a record store is tucked down an unassuming alley. It has a nice crowd, good vibes, and, most importantly, great records. There is a heavy focus on Brazilian music, with nearly half the crates dedicated to it. However, there is a little mix of everything, and Amor Records can generally be relied on to pick up the latest releases in electronic music.

The whole store is very hip, and they have a great listening station — with a built-in record holder to facilitate your digging. There are also vinyl decks sunk into a wooden island in the middle of the store, which draws people into the little bar, creating a very social experience.

As well as being a record store, they will often bring in DJs to play, so keep an eye on what’s coming up!

On the scene for a very long time, this store offers a mix of new and used records. It is known for its stoner rock and psychedelic music but has an array of other genres. You can also pick up CDs or merch from this store, like many others in the city.

Even if you aren’t into records, it is an all-around fun place to go at any time of the night or day. The records are curated by a Frenchman with an incredible knowledge of Cape Verdean music. They are directly imported (via suitcase) by him, which results in a selection of extremely rare records.

This, as expected, results in a hefty price tag for many of them. Crew Hassan is certainly a store for people who know what they want and are willing to pay for it. The records here are all secondhand, and you generally won’t be able to find these titles anywhere else. There is a mix of genres and, if you’re looking for a tropical sound, it’s a must-go record store.

Ran by Will Grant, who is an absolute gentleman, this shop is the definition of quality over quantity.

It is a tiny collection of records but it’s extremely well curated. There is a heavy focus on electronic music, and Grant is impressively knowledgeable on the genre. A DJ himself, and with many years in the industry, he is your go-to for info on electronic records.

This shop also has “the best listening station you will ever see,” according to vinyl DJ Emmet. There is a bar where you can pull up a chair to listen to records to your heart’s content. Moreover, the record-player is accompanied by a selection of reading material to peruse while you listen — mainly pictures, so you can focus on the tunes — creating an all-around nice experience.

From the small to the large, Carbono is huge. Like, really massive. They have a great collection of rock, disco, and soul, but can be relied on to have a little bit of everything. There is also a massive selection of CDs if you’re feeling more modern.

If you’re looking for bargains, and enjoy a bit of crate-digging, then you will love Carbono’s basement. It is filled with records all for 1€ each. The catch? You can’t listen to them before you buy. So, unless you have a vast knowledge of old records, you’ll probably end up with a few odd tunes, but that’s not the worst thing in the world!

This place has good prices and, unlike many of the other stores in the city, doesn’t cater for a specific niche, all of which makes it a good allrounder. 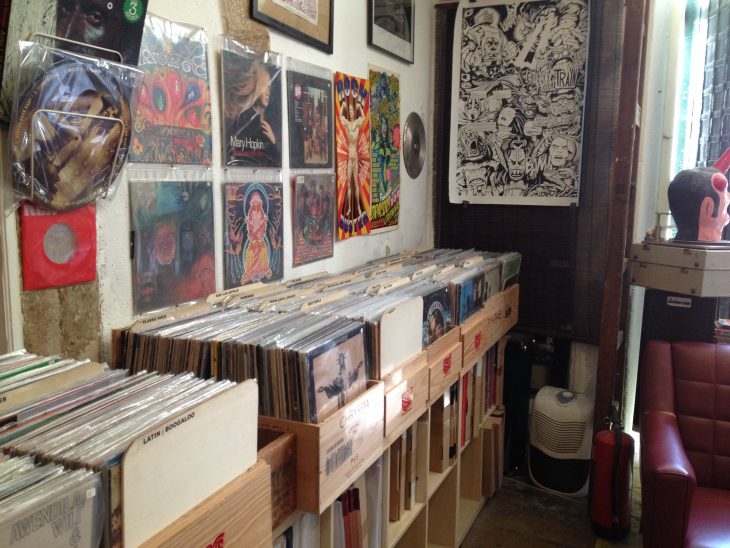 This record store is only identified by a little sign outside so can be rather easy to miss.

That would be a big mistake.

They haven’t much in the way of new releases, but they do have an excellent selection of classic rock and some older styles. In fact, there are entire sections dedicated to specific bands (think Pink Floyd). There isn’t a public listening station, but if you ask nicely the owner should give your record a spin.

Groove Records also has a bunch of merch, but what makes this place really special is that they have their own music label, releases of which can be purchased from the store.

This is a fantastic place for electronic dance music, and, situated next to Lux, this isn’t really a big surprise. It holds both new and secondhand EDM records, so there will be something for everyone. It is what we would consider the go-to store for electronic music in the city.

If you aren’t sure what you want, or you just want to check out what they have, Flur has some fantastic listening stations. There is also a great range of CDs, so if you’re rocking those Pioneer CDJs, you’re all good.

The cost is as expected, with new releases of EDM going for roughly the same price everywhere.

This is probably the first record shop that people stumble across when arriving in Lisbon as it is situated in Chiado, just next to Fnac. There is a mix of new and secondhand records, with a little bit of everything. Also, the guys who work here are really nice.

Louie Louie can be good if you are looking for 45s, 12”, or albums, and there is a high probability that you will be able to pick up some bargains. Interestingly, they are also a great place to go for soundtracks, which is very niche.

They do have two listening stations, but they have been broken for some time. Which is ironic, as downstairs is a handy electronics store where you can pick up all the necessary cables, turntables, speakers, and anything else you may need to knock out the vinyl tunes.

Most of the exploring of these stores has been done by Atlas contributor Emmet, a veritable fountain of vinyl knowledge and a kickass DJ to boot.

Dizzi Dulcimer is the alter ego of Rebecca Cree hailing from South-west England. It takes its name from the hammered dulcimer, an instrument that lies halfway between a percussion and

A collaboration between Manchester’s Durutti Column and Portuguese writer and journalist Miguel Esteves Cardoso resulted in this 1983 instrumental.

Skoola is focused on inspiring each student (from 10 – 18 years) to self-teach, guided by pros from the UK and Lisbon.

The mysterious Helvetia do Portugal, mysteriously.

Can a Sagres make things better when you don’t want to leave?

“Reflector” is a series by Atlas correspondent David Soares about songs by non-Portuguese bands inspired — in many cases, rather mysteriously — by the westernmost European nation. Angra is a heavy metal band

“Reflector” is a series by Atlas correspondent David Soares about songs by non-Portuguese bands inspired — in many cases, rather mysteriously — by the westernmost European nation. No rebrand for this magazine happening

Sponsored Post: 5 Things Expats Need to Know about US Taxes 2021

What is your tax responsibility as an American abroad? Sure, you may have to cover local foreign taxes as you live your life overseas, but you may also have to