Sama Sama Crepe and Juice Bar, one of the best vegan food joints in town, and undoubtedly one of a kind, opened its doors to the public in May of 2017. Atlas was there (read more here), so, naturally, we were curious as to how they’re doing: what the highs and lows have been, what they have learned, what’s cooking, what the craic is… In other words: “What’s same same, what’s different?” So we stopped by to have another chat with them, and consequently filed this report. 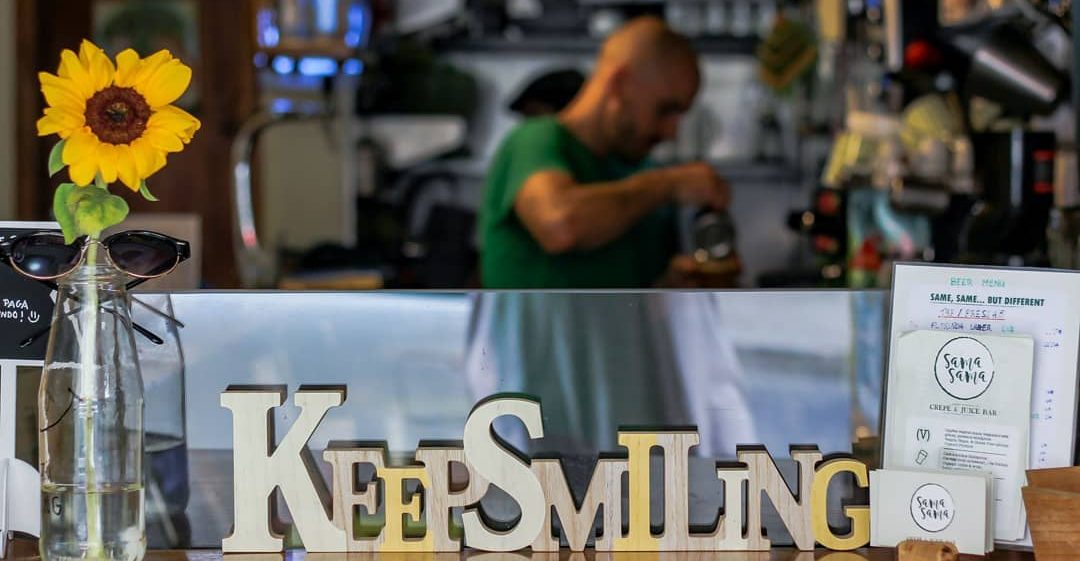 It’s an unusually mild summer afternoon in August. I make my way to Sama Sama for the 100th time this year. Sofia, co-owner and all-around cool person, is sitting outside on a custom barstool made from a discarded plastic local craft beer keg. Malte, her husband, other co-owner, and equally cool person, made said barstool. Waste not — want not. He’s inside, holding down the front.

Sofia is having lunch and chatting with Rodrigo, friend and local bike-shop worker, crepe in hand. His bike is upside down next to him. He’s on a similar barstool. Malte hand-made that one too. The two are wedged between two more barstools (guess who made those?) and two parked cars — not on the sidewalk, but technically off the street. Sofia greets me with a somewhat tired but ever-radiant smile. Malte shouts a jolly “Hello, sir!” from inside, his eyes never leaving the magic he’s prepping for three eager customers.

It’s been a long year and three months, and the couple has faced many a challenge. Camara Municipal, for instance, have not been very kind in terms of logistics.

Sama Sama, although cozy, is quite a small place. In fact, it’s probably one of the smallest indoor dining facilities in Cais do Sodré. The sidewalk is too narrow for a party of more than three, but the parking space out front, where Sofia is finishing her lunch, would work perfectly; unfortunately, it’s for cars only and on a first-come-first-serve basis. Her lunch can be interrupted at any moment by an angry motorist. Fortunately, the barstools are light and easily portable. 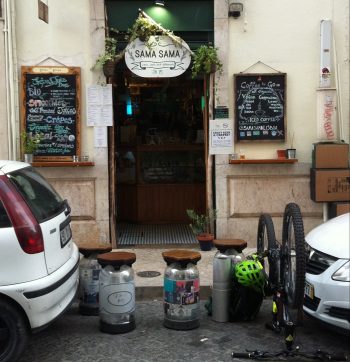 The government also hasn’t been very kind in terms of cleanliness. “It’s difficult to run a business in a place that is usually a toilet for Pink Street,” Sofia notes and smiles. The street cleaning, quite efficient with the early-morning hosing down of the area on average, stops at Pink Street, some 50 meters away, for reasons unknown. Sofia and Malte have to wash away the fun from the night before themselves. Every morning except Monday (but, therefore, twice as much on Tuesday). If you’ve ever breathed the air around Pink Street at dawn, in the midst of summer, you can appreciate their level of dedication.

Another challenge has been figuring out the best time to close. It took a year of experimenting to find that 9am to 4pm is optimal. For the first six months they stayed open until 10pm. They also tried as late as 2am for a while — the locals seemed to prefer them to kebabs, the classic Lisbon late-night staple. But, alas, you can’t please everyone.

“A big part of Sama Sama is the smiles and the love,” Sofia says, “and we need a life for that.”

Even so, they are never truly off the clock. “We’ve always worked but we had never managed,” she adds. “Now we manage and work full-time. It’s 10 times harder.” In just one week in February, for example, the pair clocked in a record 85 hours total each; they did the math. Together, that’s 170 hours total. A week only has 168 hours, in theory. And they don’t get paid overtime. Go figure.

Continuing to source their ingredients locally has also not been an easy task. It would be cheaper and easier for them to have things shipped in from abroad, even as far as China in some cases. But making sure your meal is as fresh as humanly possible is part of the philosophy of Sama Sama. They still take turns doing semi-daily runs across the river to meet with a handful of local farmers to procure the necessary goodness.

“People forget that ‘organic’ is not just a label,” says Sofia. That is, they have to walk that thin line of balancing their spending costs with their menu prices. In the beginning, locals would wander in looking for the typical “menu” offered in most other places. “Padaria Portuguesa is everywhere, so they can afford to charge 3.50€,” Malte says. Sama Sama, meanwhile, is basically just two hard-working local health freaks who want to keep you alive, make you smile, and make badass crepes and juices while at it. And that’s okay, because that’s part of the plan.

Since last year, they have had multiple offers from starry-eyed business types that choose not to wear suits. “I know for sure that we could open 10 more of these today, if we wanted,” Malte says. There is literally no competition, and plenty of demand. There are other vegan places around, but none source locally. And, as far as we know, nobody in Lisbon does vegan crepes. At least not like Sama Sama does vegan crepes. A common thing they hear from foreign customers is “if we only had this in Berlin, Amsterdam, Milan, etc.”

But that’s not what Sama Sama is about. “Ma and Pa shop” might be an overused term, but Malte and Sofia are bringing it back tenfold. Starbucks, McDonald’s, Telepizza — eat your heart out.

When you ask for a straw for one of their gnarly juices, you get a bamboo one. Waste not — want not. The rest of the tableware is still 100% eco-friendly too. They continue to partner with local craft breweries, new and not so new, to give you a healthy alternative to Sagres and Super Bock. And they charge less for the craft beer than most of their neighbors. Malte steps out for a second to let me try their latest addition: Trevo Da Caparica, an organic Indian pale ale started by two Portuguese and two Irish lads down south. Malte is Irish, Sofia is Portuguese. That’s what you call paying it forward, underdog style.

The menu is as unique and varied as it was a year ago. The crepes are still intimidating, both in size and flavor, and the cheese is never burnt burnt, unless that’s what tickles your pickle. They slightly alter the menu seasonally, adding a new invention here and there, constantly evolving. Each crepe is still named after a person they admire. Ask them. The “Alma,” named after a close friend who had passed away shortly before they opened, remains the bestseller since day one. The “Mick,” named after another friend, a crepe connoisseur in Ireland who helped out with the early beginnings, comes in at a close second. Fun fact: a meat option was on the menu for the first two months, but they quickly realized that, at Sama Sama, carnivores often eat vegetarian without realizing it. Yep, they’re that good. 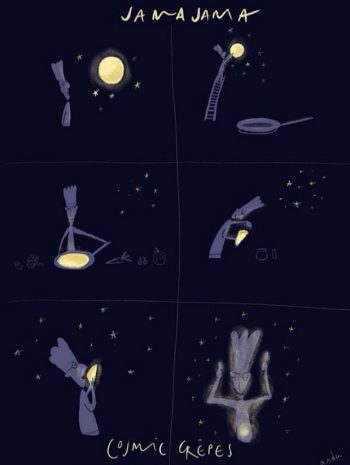 What keeps these two crazy kids going is the love. Well, and maybe some of the money (they, too, need to eat). And, of course, the positive feedback. They have received tons of digital fan mail. And not just letters. Some customers have sent artwork inspired by their meal. Malte plans to use these to decorate future barstools.

They have a loyal following of locals who come here for lunch on a daily basis. And the flow of newcomers, both of the tourist and Lisboeta variety, is ever-increasing. They have managed to keep the same level of spirit and professionalism that they’ve practiced since way before the inception of Sama Sama. Their smiles are still highly infectious.

“What else is different? My fucking age,” jokes Malte.

Malte still mainly makes the crepes, but Sofia regularly takes the helm. And, of course, “there’s a difference between ‘the Chef’ and ‘the Chief’”, Malte notes cautiously. They both still give 200 percent, 24/7.

One of the original ideas for Sama Sama was that of a traveling food truck, and they were able to partially realize this dream this summer. They just got back from two festivals in the south of the country: Festival Musica Mundo in Sines, which brings together some 80,000 people, and MED (Mediterranean Festival) in the Algarve. They set up two tents to serve their magic, having barely enough time for an occasional morning dip in the ocean. They were thinking of BOOM, but it’s a little “too big” for their tastes. Next year, they plan to hit a few more festivals, hopefully with an actual truck this time, and with two-three new faces keeping the wheels turning back in Cais do Sodre on their behalf. If you like what they do, you got a year to touch up your CV. 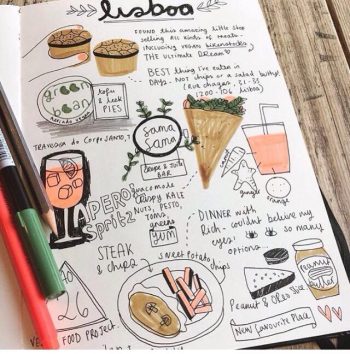 With healthy eating on the rise, the future holds many challenges and rewards, and Malte and Sofia are prepared to face these as they always have — with a smile. When asked separately about advice for young people starting their own business, they each reply without hearing the other, and without hesitation: “Don’t do it!”

Then Sofia clarifies, “If you’re gonna do it, make sure you love it.” She doesn’t have to ask what I would like to order, because this is Sama Sama, and I’ve been here before. The ginger shot is the same as the last time: inspiring, to say the least.

Mensagem is taking community journalism to a new level — because it’s including the city’s residents in its editorial process.

Find out what four artists are doing on Portugal’s rivers, inspired in part by Huckleberry Finn and Kon-Tiki

“It’s not every day you can see a dream come true and last 25 years,” Gillen says.

The Lisbon multi-instrumentalist Noiserv spells out a word starting with N for us.