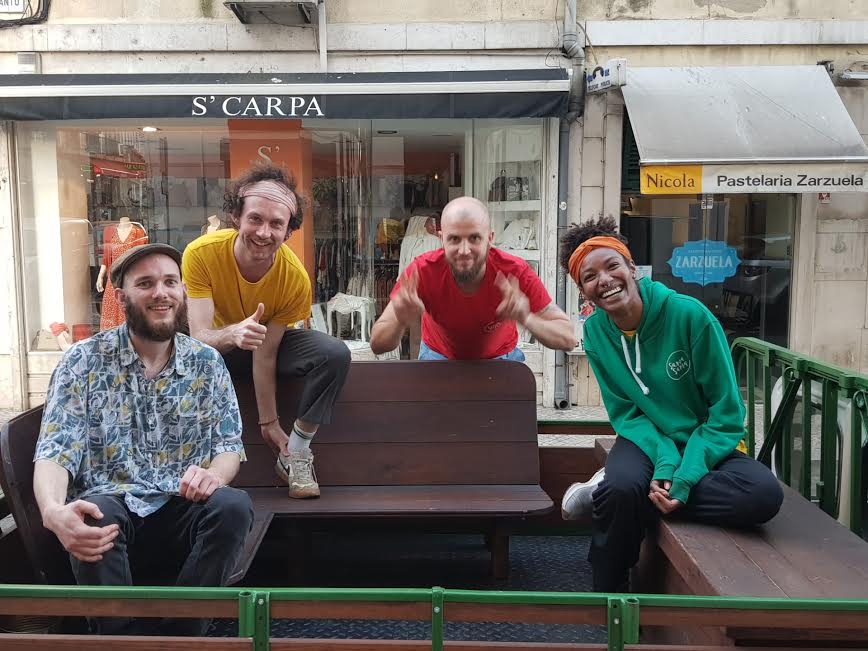 Sama Sama – Crêpe and Juice Bar officially opened its doors on May 25th, 2017. Malte Kochen — co-founder, co-designer, co-architect, co-owner, head chef, co-greeter, co-server, ball of energy and wisdom, a dear friend of Atlas and all-around badass — had almost single-handedly built the place from the ground up, brick by brick. Almost single-handedly, because he couldn’t have done it without friends and family but first and foremost his wife, fellow co-founder, co-owner (and all other “co-“s), also a dear friend of Atlas, and equally badass human being Sofia Gomes.

Atlas was there for the genesis and for year two, and watched as Sama Sama, crepe by impeccable crepe, grеw from a humble new kid on the block into one of Cais do Sodré’s most frequented destinations for awe-inspiring and immune-system-boosting goodness. As 2020 hit, Malte and Sofia, along with Joe, Mila, and Niall — friends who jumped on board over the years to help with the ever-growing demand — were riding a beautiful, locally sourced, all-vegan, eco-friendly, smile-inducing wave… And then, almost without warning, the world as we knew it had ceased to exist. 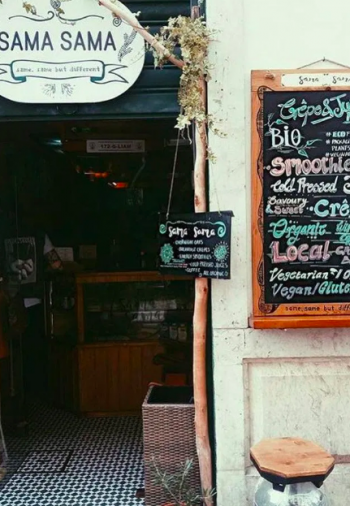 I thought to myself, ‘I’m not gonna open these doors again.’

On March 14th, 2020, as Portugal was getting its first taste of a full-blown global pandemic, Sama Sama closed its doors indefinitely. As I sit in Malte’s and Sofia’s living room contently digesting a variety of Malte’s edible healthy masterpieces, the couple tells me about that fateful day. “I still can’t really explain it. It was the strangest feeling ever, a surreal feeling… having this chat with the staff…,” says Malte. “A week before we had all been joking about the virus.” Sofia sent a video message saying “let’s see what happens,” Malte prepped a huge quarantine goody sack for each of his staff, cleaned up for the night, and that was that. “I thought to myself, ‘I’m not gonna open these doors again.'”

They closed a few days before Portugal declared its first state of emergency. “We thought — ok, maybe we should stop before we see what happens…we’re not gonna wait for guidelines,” explains Sofia. Sama Sama is a small place by any stretch of the imagination. Niall, Joe, and Mila come to work by boat, bus, and train. And, given the location, the clientele is in large part tourists and travelers. For a second medical opinion, they consulted their friends Conor and Gaby, owners of the neighboring (and much larger) Hennessy‘s and O’Gillin‘s Irish pubs and Crafty Corner. They, too, had decided to halt operations, despite St. Paddy’s Day — i.e., their Christmas — being right around the corner. Things were getting real indeed.

After the first week of the lockdown, they were sure they had to close. Sofia continues: “Realistically, we can’t go on with this. People were saying stick it out. We talked to the staff, family, our accountant, the landlord, Conor… But no one had any idea how long this would last.” Other countries were saying two months, which for a small business can mean a lifetime. As both owners and employees, they weren’t eligible for unemployment benefits (this would suddenly change in May, but they didn’t know this, as they were in mid-March). A month into the madness, the bills started to pile up: staff wages, Social Security, rent.

We decided that if we close, it will be on our terms, not Covid’s.

While quarantined, they studied what other businesses with similar models were doing online. That was mainly delivery. A significant number of loyal customers and coworkers asked about delivery too.”The whole idea of Sama Sama was your meal is freshly prepared right in front of your eyes. With delivery that’s tough. The crepes are best fresh, and it’s just not the same,” says Sofia. “When shit hits the fan, it’s heartbreaking. You want to give your best…” she pauses. “Fear is more likely to kill us than the virus,” she goes on, “and we decided that if we close, it will be on our terms, not Covid’s.”

Sama Sama is Sofia’s and Malte’s first baby, so to speak. And in the almost three years of its existence there has been plenty of joy. The two remained at the helm every step of the way, and their crepe street cred coupled with local and international word-of-mouth allowed them to make a few changes: some renovations here and there, hiring some helping hands, and the occasional much needed day off. To facilitate extra seating, there was the partial realization of their original dream of a food truck — another one of Malte’s masterpieces. 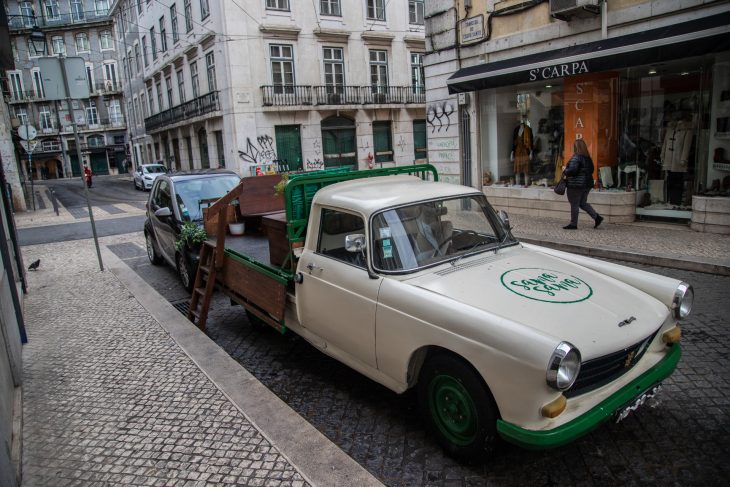 Demand continued to grow, so in July of last year they joined forces with neighbors Crafty Corner. As a result, the latter started opening at 10 in the morning instead of 4 pm; Crafty also became solely responsible for the beer, making Sama Sama even healthier. The menu expanded too — the ingredients, loyally sourced from friends Quinta da Herdeira, got progressively crazier and more experimental. For instance, they once did a vegan Shepherd’s pie in a crepe, and it sold well beyond expectation.

The pair maintained a few key traditions, such as “a new crepe of the week,” each week, always named after someone they know and like. Each member of the staff had a turn as a crepe. I’m proud to say that I was a crepe once (and damn I was good), as were the rest of Atlas, which weren’t bad either. And a significant amount of the staff from neighboring establishments had a go too. Alma, however — named in honor of a friend who had passed away shortly before Sama Sama was born — remained their best-seller throughout the years, which is kind of magical. Sofia’s eyes light up, as do mine, as she describes their most popular crepe: “the crispy kale, the creamy avocado, the freshness of tomatoes and lettuce, the mixed nuts…there’s so much going on in your mouth.”

They’ve also catered a few events over the years, private birthdays and parties, and bigger ones like Green Beans and The Ethical Assembly. One time a customer asked for a buffet for 30-40 people. They accepted the challenge. Why Not — friends and producers of the Lemon’Mate served by Sama Sama — became and remained a loyal partner in the beverage department. And Malte and Sofia note that they are humbled by and grateful for all the support they continued to receive from their neighbors Hennessy’s and Crafty, their friends, family, and customers new and old. 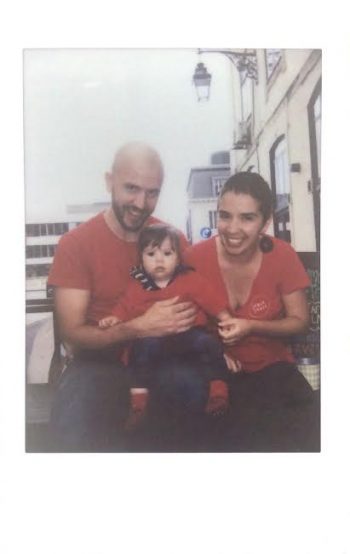 But perhaps the greatest joy came on May 25th, 2019. That day, Sama Sama turned two years old. Much more importantly, it is also the day that the world welcomed Caley, Malte’s and Sofia’s actual first baby. Yep, on its second birthday, Sama Sama literally became a mom and pop shop. Niall, Joe, and Mila stepped up their crepe game accordingly. Mariana, another close friend, joined the team to help out in those fall and winter months. But the couple, being who they are, had both continued to work through most of Sofia’s pregnancy, taking only a brief respite in January. And after June of last year, any given day you stopped by Sama Sama or Crafty Corner, at least two of the three Kochen-Gomeses were there, at least one of them smiling. Sofia jokes, summing it up perfectly: “One of our greatest joys is that our baby (Sama Sama) gave us the freedom to be with our baby (Caley) for his first year.”

Remember the food truck dream? Well, that dream is a day closer to reality…

So what’s next for Malta, Sofia, and Caley? As of now, Sama Sama’s physical doors remain closed. The trio is heading south, across the river, for a two-month break. Spirits are high, the smiles — still dangerously infectious. The website is up and running, while the crepe machines are on standby. For what? “Corporate events, private events, festivals, weddings, parties, customized menus catered to individual needs and requests — you name it,” says Malte. Remember the food truck dream? Well, that dream is a day closer to reality, even if it be a virtual one.

“We’re staying in Portugal for now,” — says Malte — “and then who knows. People can reach out via our website, and message us for more info.” End-of-the-world pending, they plan to be back in business in August. In other words, Sama Sama is, at its core, still same same, but different.