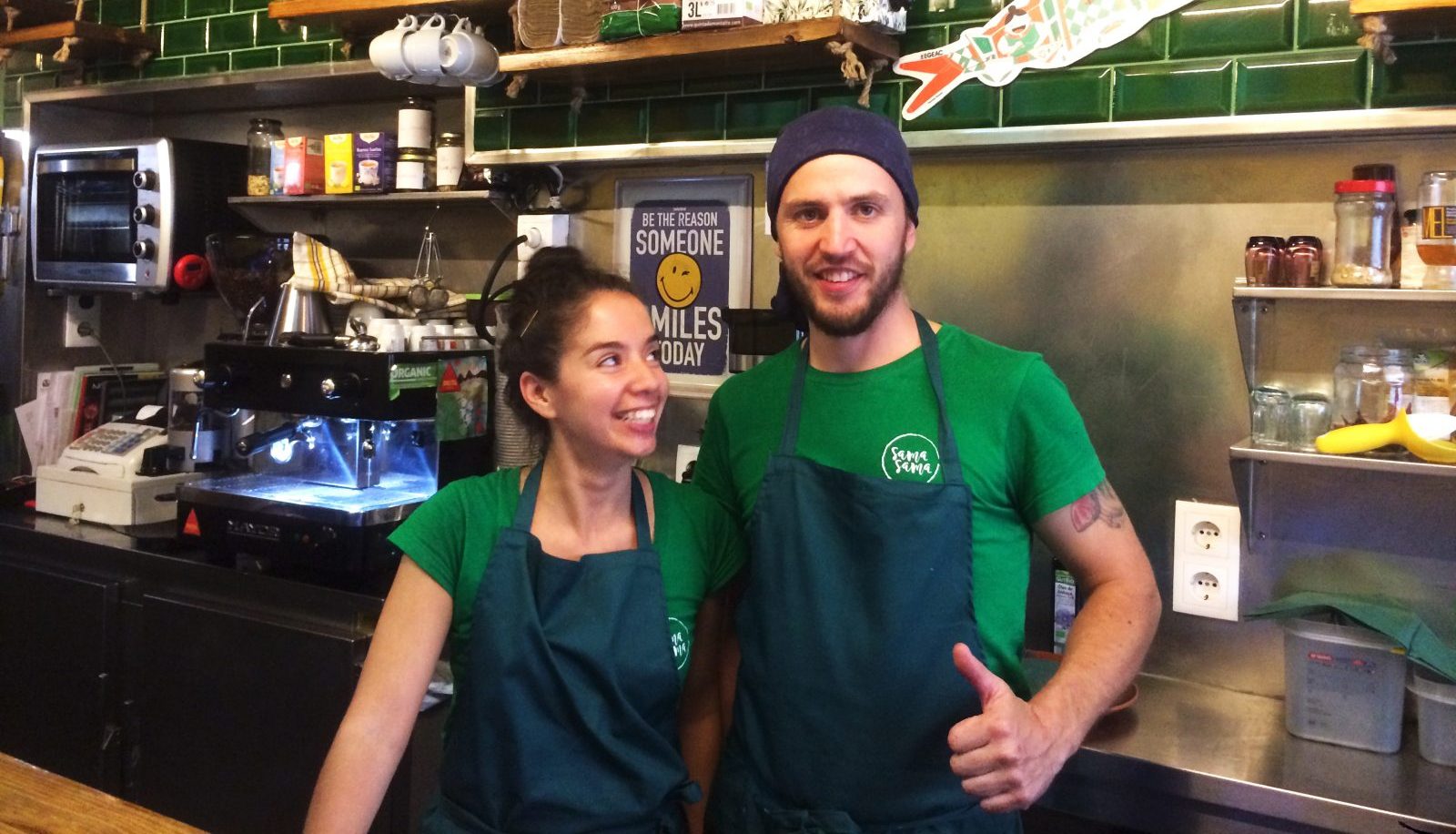 Sama Sama: The Couple Behind the Crepes

On a scorcher of a June day, tempted by the smell of melted cheese, I walk into Sama Sama, a hidden little juice bar on one of Cais do Sodré’s side streets. Sofia is in the back, cleaning a glass; Malte wipes the sweat from his brow as he pours two globs of organic dough onto his impressive crepe cooker. They both greet me with infectious smiles. “It’s better if they’re not perfect circles,” Malte says. This is the third time I see this artist at his craft; what will happen next, food-wise, is the stuff of legend. 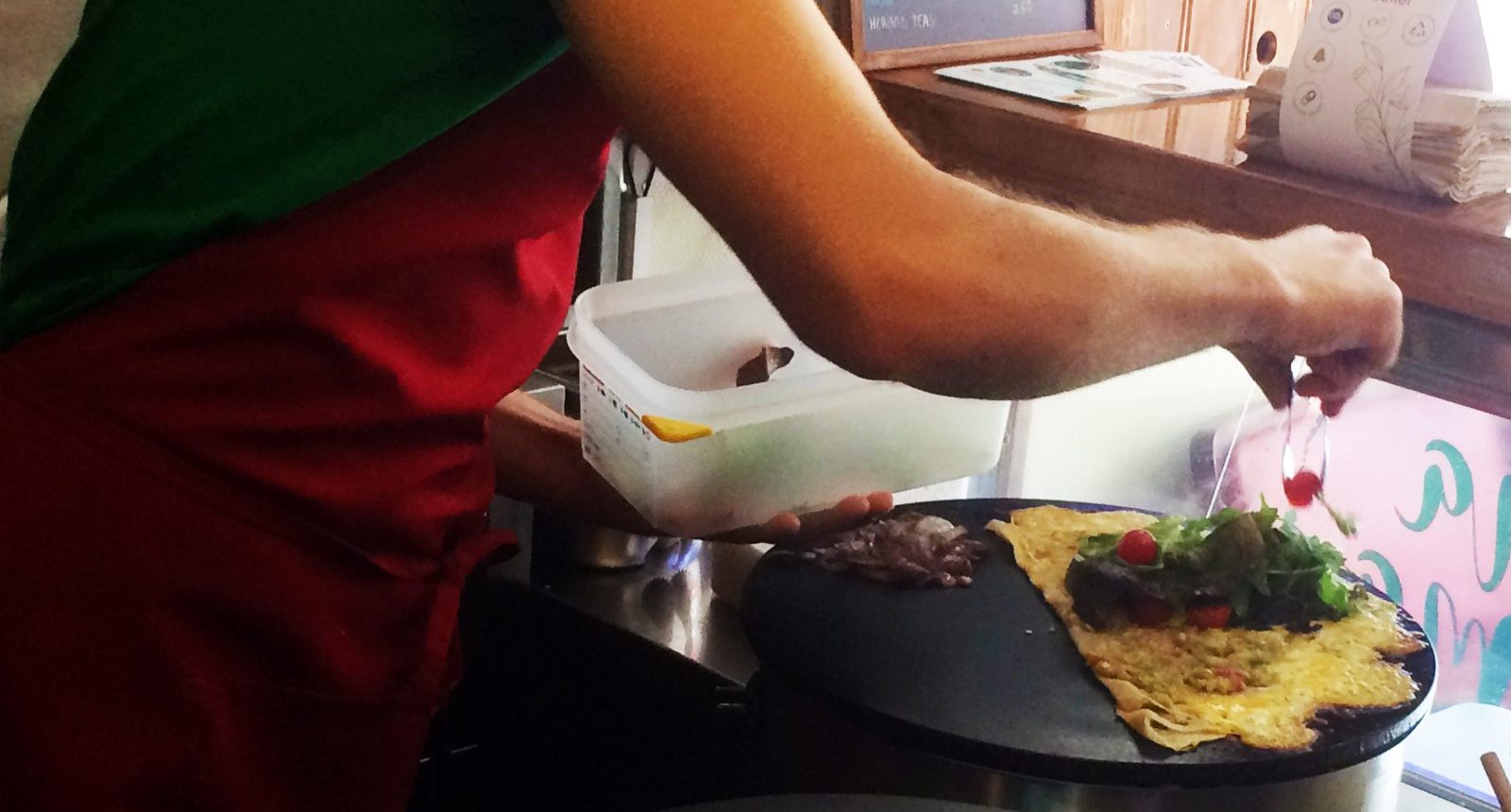 In 2015, while traveling through Indonesia, the couple kept hearing one phrase over and over again. Any time they tried to buy supplies or simply said “thank you,” there it was: Sama Sama. It quickly became their unofficial travel companion. Roughly translated from Bahasa it means either “You’re welcome” or “same same.” The latter version came in particularly handy as a comeback for the locals when they didn’t have exactly what was asked for.

At some point in their journey, Sofia turned to Malte and, half-jokingly, said: “If we ever open a business, we will call it Sama Sama.”  The seed had been planted. 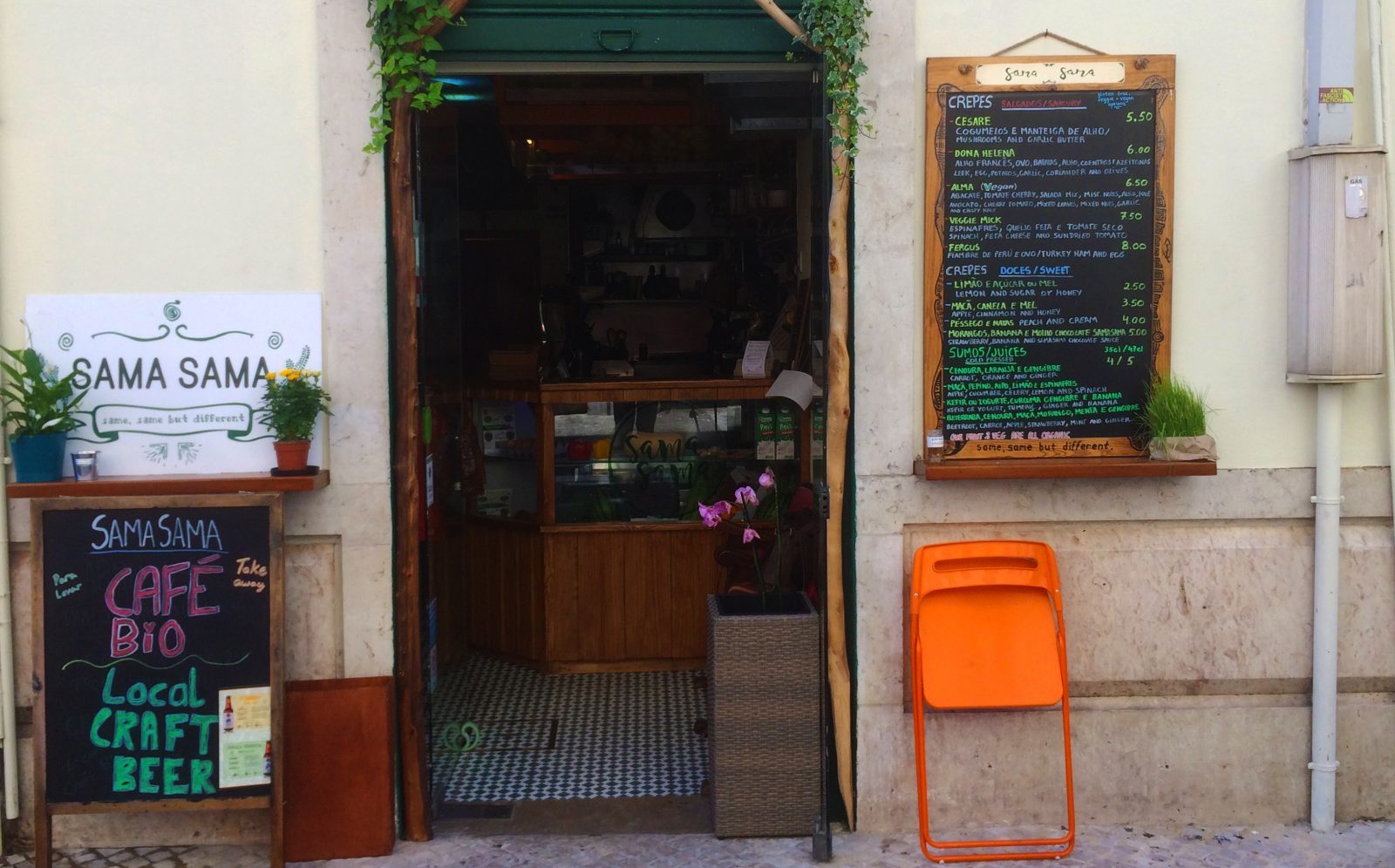 Malte, 31, is the son of organic farmers and originally from Galway, Ireland. He came to Lisbon in 2013 looking for work, with a background in boat-building. Work was not as easy to find as he originally thought, however. So, after a few months of struggling and with some hesitance, like many in his situation, he found a gig at O’Gilin’s, the first Irish pub in Lisbon.  Sofia, 26, a Portuguese native originally from Loulé, had come to the big city several years before to pursue acting. She had been working at O’Gilin’s for roughly a month when they met. Soon after, the pair left for Ireland together. Eventually, they found their way back to Lisbon. They married on a beach in Sintra in June of 2016.

We’re not looking to cater only to tourists and upper-middle-class Portuguese. We want to be a food place that students can go to for their lunch break too.

Sofia tells me any time she drives across Ponte de 25 de Abril, regardless of the traffic, it reminds her of how beautiful Lisbon is. She loves just wandering around town too, hiking up to a miradouro, or just navigating the endless cobblestones. She doesn’t mind the hills. Malte, who describes himself as “not really a big city person,” doesn’t mind the hills either, even when biking; he doesn’t understand why people always complain about them. And they both feel at home in Cais do Sodré. “It’s like a small town. Every two minutes you are saying hello to someone,” says Malte.

Sama Sama, located in the very heart of the neighborhood, officially opened its doors on May 25th, 2017. It is, for now, solely a two-person operation, although it took some help from friends and family to finalize. Formerly a typical Portuguese tasca, this highly incognito hole-in-the-wall lay abandoned for nearly nine years. During his days at O’Gilin’s and, by default, Hennessey’s, Malte had appropriated the tiny space as a sort of workshop and storage room for the two pubs.

The refrigerators were once used to store cement bags. It took a heavy three days of scrubbing, sanding, dusting, and cleaning to restore the kitchen. It then took another three months to make the whole place presentable. Malte is semi-clusterphobic, and the space is small by most definitions, so imagination was key in terms of design. The fruit that hangs overhead are real and not accidental. The freshly-varnished bar is cozy and welcoming. The coffee coasters were a gift from Sofia’s mother.

There are no barstools; coincidentally, the original idea had been one of a mobile nationwide food truck.

“We want people to get their food and drinks and go enjoy the city… go eat down by the river or just walk around town. Ideally, there will be a queue,” Sofia says.

“We’re not looking to cater only to tourists and upper-middle-class Portuguese,” Malte adds. “We want to be a food place that students can go to for their lunch break too.” 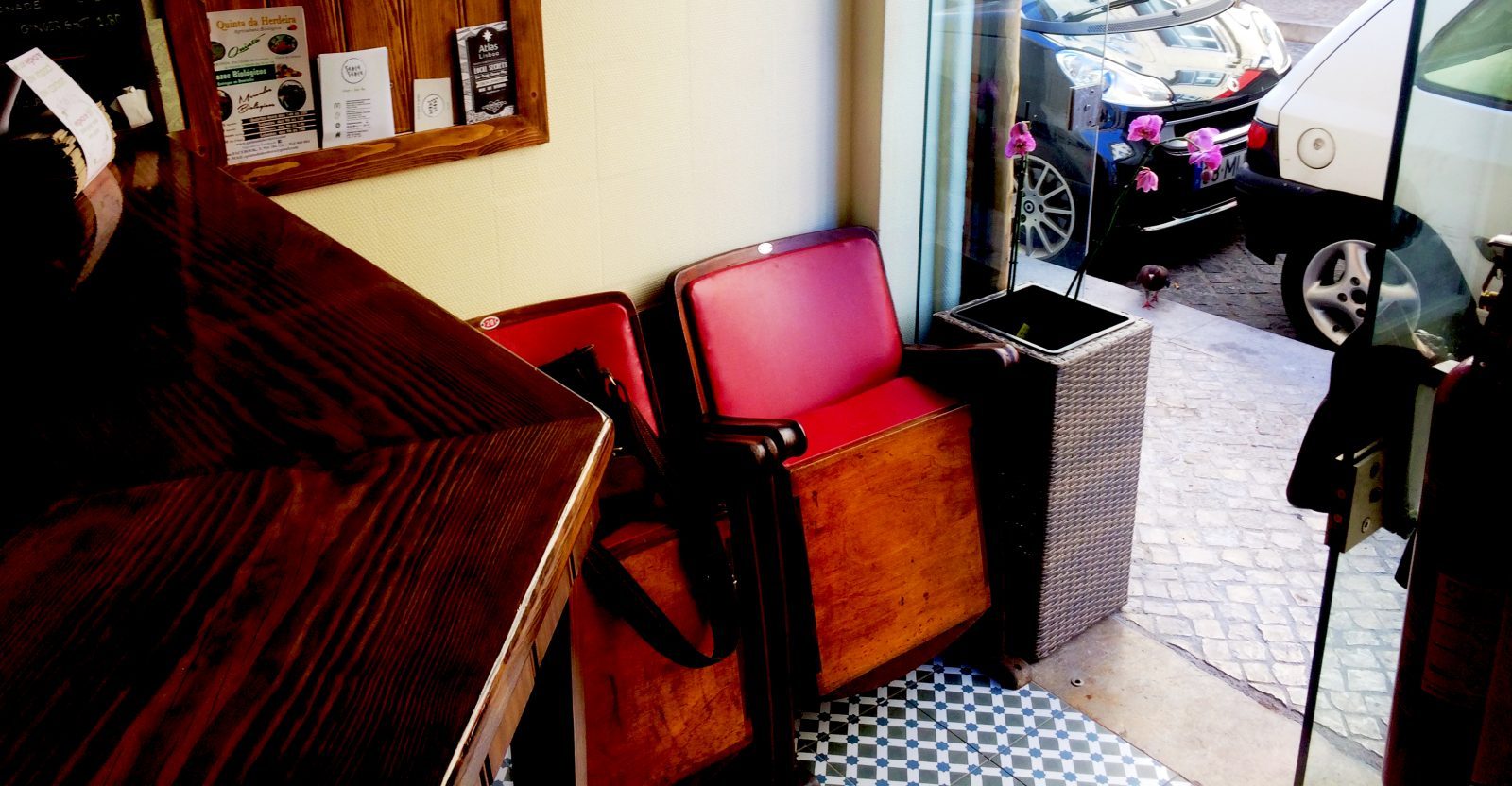 If you prefer to dine in, there are two fold-out movie theatre chairs, courtesy of Feira da Ladra, which you can relax in while enjoying a shot of ginger, a healthy juice, a craft beer, one of five otherworldly crepes, or all of the above. The green tiles on the walls are from Spain, but mostly everything else is local and organic. Even the plasticware is organic. Ask them.

But it’s the crepes that truly embody the philosophy of Sama Sama. “They’re same same, but different,” they joke. Said crepes are impossible to describe and unlike anything you have ever had. There is melted cheese on the outside. There is magic on the inside, without fail.

The recipes for the three dips Malte makes are family secrets. The basil pesto is highly recommended. The couple has partnered with Oitava Colina to serve fresh craft beer. You can also purchase and bring back a growler (beer jug) to get refills to go, which makes Sama Sama especially stand out from any other beer-serving establishments in the vicinity. The wholly-organic ingredients come from across the river, Quinta De Herdeira, a local farmer’s market with a humble shop to boot. Malte and Sofia take turns driving there to restock the refrigerators every few days.

Sama Sama is the definition of a labor of love. He is the main chef, she is the main DJ. The soundtrack and the food are equally inspiring. There have been many sleepless nights so far, they are still working out the bugs, and there’s a long road ahead of them. But the energy is there. And the food is truly something else. Furthermore, I have yet to be greeted without a smile.

As I conclude my interview, another wanderer pauses out front, intrigued by the irresistible smell of my soon-to-be-consumed Veggie Mick crepe. I order a ginger shot and step outside for a cigarette.

“How’s the food here?” the curious soul asks, studying the chalk board menu.

“The crepes, among other things, are amazing”, I reply.

“Oh yea? What kind of crepes?”