First of all, Santo António is an impostor. Yes, because the official patron saint of Lisbon is actually São Vicente.

First of all, I’ll just let it out there: Santo António is an impostor.

Yes, because the official patron saint of Lisbon is actually São Vicente. This is the one whose statue stands at Portas do Sol in Alfama, where he holds the symbol of the city in one hand – the ship crewed by two crows – and looks down at the revelers on the eve of June 13 with a scowl that seems to say, “This should have been my party.”

Santo António was adopted as patron saint by the population at the expense of São Vicente — perhaps unsurprisingly, since  June 13, Santo António’s feast day, is better, weather-wise, for outdoor celebrations than January 22, Saint Vincent’s feast day. 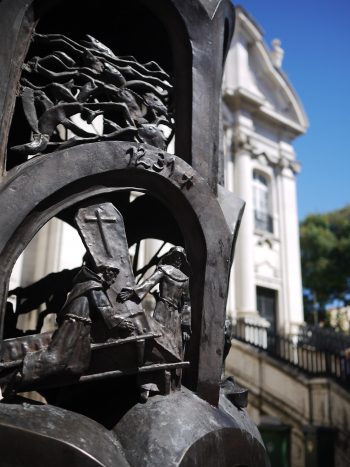 To his credit, however, Santo António was born in Lisbon in 1195, just down from the Sé, where the church with his name stands now. He became a Franciscan and his travels through Morocco and France ended in Italy. In Padua, to be more exact.

For the first time this year, there was even a market held at his birthplace, featuring mementos and artifacts related to Lisbon’s favourite saint. Santo António is often (although not as often as Michael Jackson) depicted carrying an infant, supposedly in his case baby Jesus. The saint is also famous in Portugal as the marriage saint. Since the 1950s, Lisbon couples have been able to get their wedding sponsored by the city, using the Sé as a venue, and feel special on their special day, along with dozens of other couples. This wedding en masse is often televised.

And so are the traditional marchas (marches) down Avenida da Liberdade. This is where most of Lisbon’s neighborhoods compete, each with their own choreographed procession, carrying ornamented arc-shaped frames and singing, with their hands on their hips, original songs whose themes allude to their neighborhoods or more general current affairs.

The beat tends to be repetitive, though.

With a long stretch of the imagination, think of it as a Lisbon version of Rio’s sambódromo at carnival, with less percussion and nudity. The garish-coloured garments worn have as the central figure the so-called varina (ambulant fish-monger).

Since marchas populares involves months of preparation and rehearsal, they’re taken seriously by the people in many of the historical neighborhoods whose lives have been centered there for generations. They often embody the term bairrista, which in its figurative sense can sometimes be pejorative. There can even be bitter rivalries between neighborhoods. The marchas also reveal Lisbon as something of a patchwork of different villages. Alfama is to marchas what Brazil is to the football World Cup — it’s won the most titles by far. Madragoa, Marvila, Alto da Pina, and Mouraria haven’t been doing badly either.

One can’t help wondering, with the ongoing eviction of its inhabitants for the sake of short-term rentals or wealthier investors, who will take part in Alfama’s march in the near future, though. Maybe we’ll have French or German or American “marchers” strolling down the avenue, singing a tone-deaf ‘Ié, ié, ié, Alfama é que é!’ Or maybe AirBnB will start selling it as an add-on “Live like a local” experience. 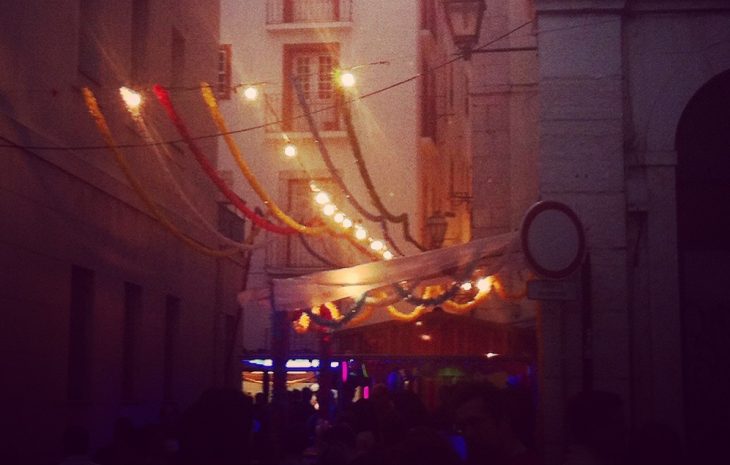 What ensues on the night of June 12, meanwhile, is a different matter. Santo António is recognized in several countries as the saint of lost items, lost people, and lost souls. This is quite appropriate on the night of the feast day in Lisbon, as it’s easy to lose your belongings or the people you’re with or even your (festive) spirit — all because of the crowds. Imagine most of the greater Lisbon and visitors thronging to a couple of old districts, where every street and alley is decorated with colourful garlands, a few of which often stay on until winter. Makeshift stalls sell basil plants containing a message to offer your beloved (Santo António’s the marriage saint, remember?). To avoid jinxing yourself and others, you’re not supposed to smell the basil directly but rub the palm lightly and then smell your hand.

Barbecue grills are at every corner and fill the air with smoke, mostly of sardines, the favourite staple for the occasion. And the music… well, it’s often the kind you’d hear in summer village fests, the so-called pimba music, a term coined sometime in the ’90s. The style is replete with basic basslines and lyrics filled with a rich variety of sexual innuendos, and the Portuguese typically sing along and even dance to pimba with, well, plenty of irony. These little street parties take place all over the city, and certain streets are so packed that it takes you 10 times as long to walk their full length, with many shoves on the way — and if you’re short enough, you might even levitate a bit.

You might want to give the whole thing a wide berth if you’re demophobic. Even I often find myself wondering why I go even though I already know what I’m in for. But I can’t keep away when in town — I wouldn’t miss my city’s main celebration, everybody else is going. Personal highlights over the decades (not all in the same year) include ending up stranded alone, suffering the effects of a dodgy wine, without a clue of how to get home, being caught up in a brawl against my will and, let’s just say, smelled the basil directly at some point, with all that it entails for one’s love life. 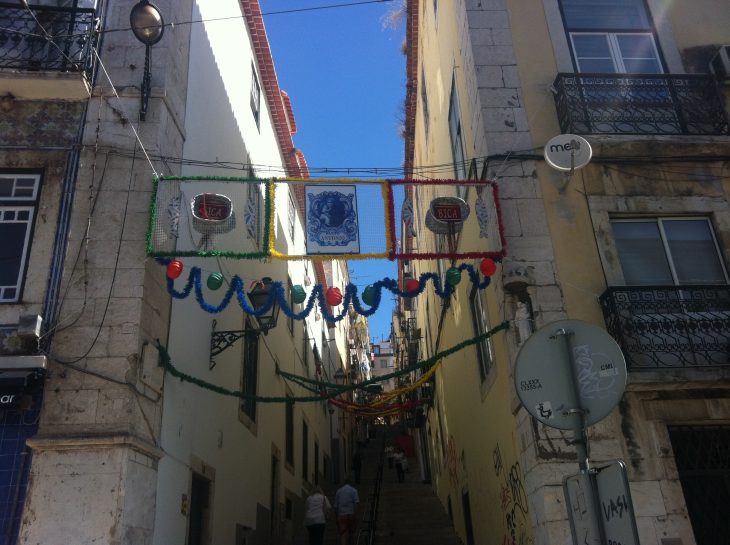 The so-called arraiais now tend to be scattered across the city and take place during the whole month of June (to the great despair of many nearby residents). But if you happen to be in town on the night of June 12, avoid going in a big group or you’ll lose half the people on the way. And don’t arrange to meet with anyone there, it almost certainly won’t happen. Don’t expect to get a table anywhere, or else go early, as the best you’ll get is you standing with a sardine on a slice of bread, and its grease running down your fingers. Be ready to walk back all the way home, as after a certain time buses get crammed and there are not enough cabs for everyone, although in recent years, there has been an effort to supply more night buses and the metro runs all night for the occasion.

One thing is for sure, though: if you get back home with sore feet, the smell of sardines on your fingertips, and of grill smoke and stale beer on your hair and clothes, you probably had a proper Santo António night.

It’s more of a cookie bite than a “ring of fire” here in Portugal, but how often do eclipses come around on the nation’s biggest holiday? Plus what else are you going to do?

“Ah! where shall weary man take sanctuary, where live his little span of life secure? and ‘scape of Heaven serene th’ indignant storms that launch their thunders at us earthen worms?“ — Luís de Camões.

Two more large festivals are postponing their dates for a second time due to Covid – but SBSR and LISB-ON are still planning to make it happen.

“Life is fleeting. It is to be enjoyed.” Tori Amos.

“In all the universe nothing remains permanent and unchanged but the spirit.”

Dizzi Dulcimer is the alter ego of Rebecca Cree hailing from South-west England. It takes its name from the hammered dulcimer, an instrument that lies halfway between a percussion and

A collaboration between Manchester’s Durutti Column and Portuguese writer and journalist Miguel Esteves Cardoso resulted in this 1983 instrumental.