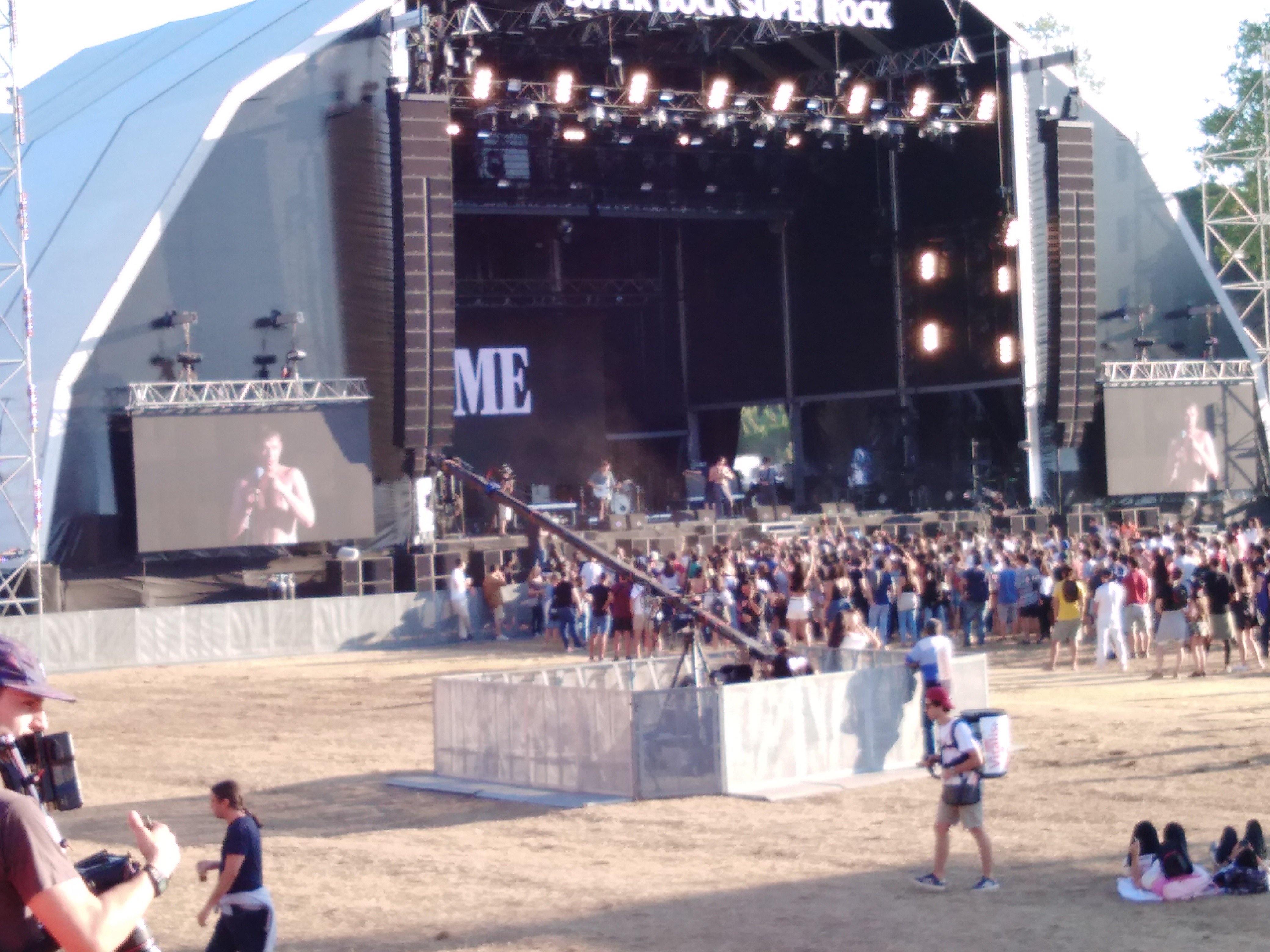 This year, for its 25th anniversary, the Super Bock Super Rock Festival headed back to the woods in Meco, near a semi-nudist beach, down south in Sesimbra. Having had a good time at last year’s version in Parque das Nações, and being big fans of both Charlotte Gainsbourg and beaches, semi-nudist or other, Atlas decided to tag along for a day. Here’s a timeline of some highlights from Friday night.

It’s 13h30, Friday, July 19th, 2019. At the TST bus stop in Praça de Espanha, a small group of people dressed like they’re going to a music festival awaits the 3,50€ shuttle bus directly to and from SBSR ’19. The bus, according to the organizers, “runs frequently,” which is very cool of the organizers because conventional transportation from Lisbon to Meco is logistically tricky.

Today is the second official day of the festival. The shuttles, meant to arrive at 14h, start arriving at 14h45, which is impressive, because yesterday evening, the first official day— with hundreds of festival-goers and no shuttles in sight for at least three hours — was a very different story… Sorry, Lana Del Rey.
Today I came early. About 80 of us pile into the first bus. The crowd is fun, summery, cordial clusters of mostly locals, some with camping gear and/or various refreshments. Early-twenties is the dominant age range: SBSR is officially older than half of its attendees.

The ride is quick and painless. Not an hour later, we unload in a secluded green area by a main road. We cross the almost-empty sandy parking lot, go through a light security check, and disperse into the festivities. There is a picnic vibe, with Super Bock, Somersby, various food stands, tables, and general festival-event stuff left and right — but no sign of music yet. 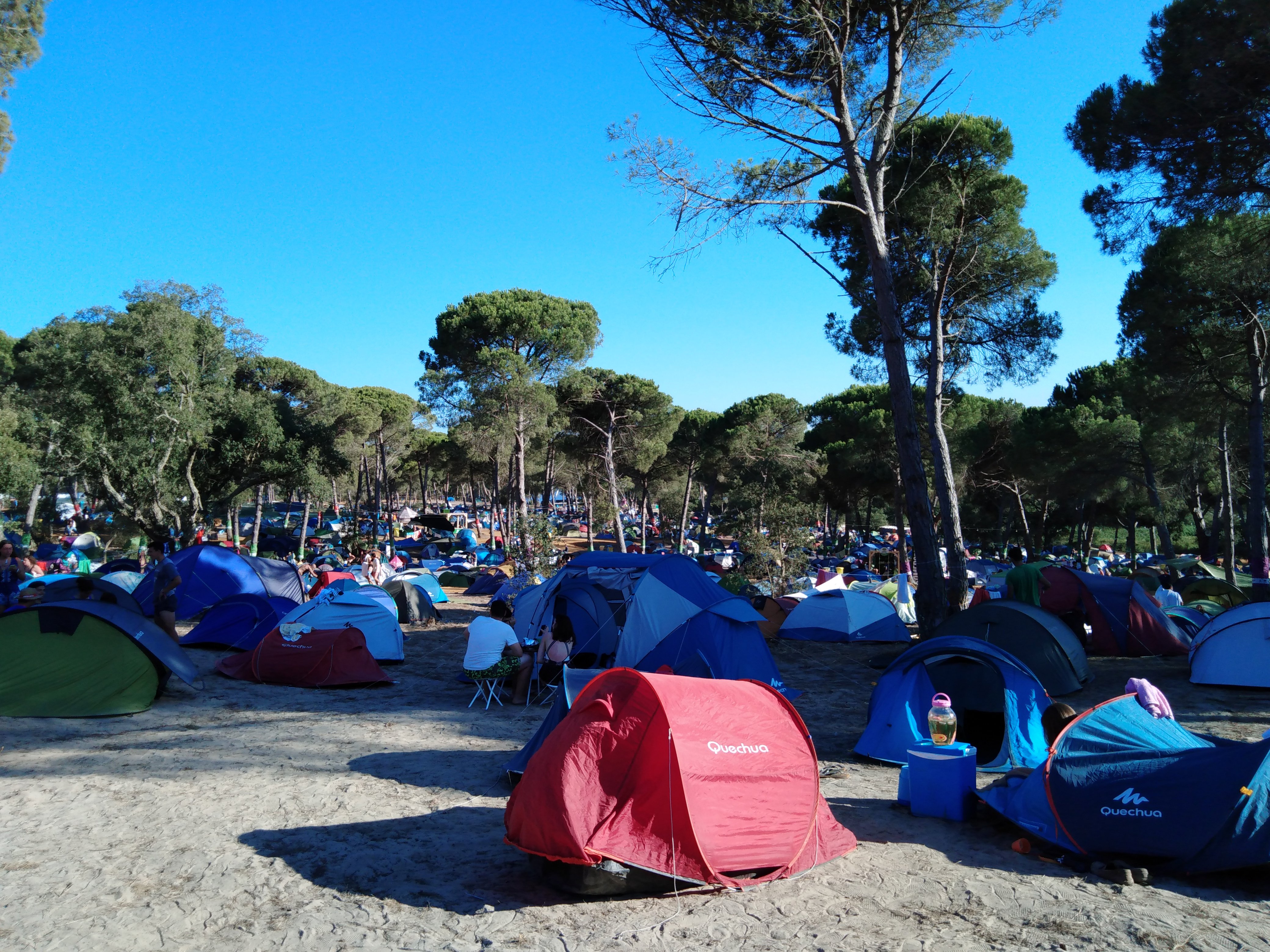 There’s a sloping village of a few hundred tents, and on more level ground — a smaller, gated-off village of bigger, custom canopy tents. You can rent both versions. Between these two mini-cities are public showers and bathrooms. The more dedicated, middle-class weekend festival-goer emerge here and there, lounging and/or curing their hangover. Swimsuits, trunks, and towels are strung up between trees. I walk down to the main entrance. 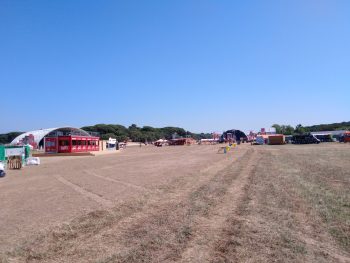 After a much more thorough security inspection lies the main area — a beautiful spacious sandy field, with a sprawling perimeter of four arena-style stages (Somersby, EDP, Super Bock, LG), food and alcohol stands, all sorts of marketing (a Toyota stand, for instance), a makeshift gate, then hilly green wilderness and blue sky. It is mostly desolate and calm for now, with minimal signs of last night’s party. There’s faint techno playing somewhere, and the majority of people are staff. Everything is Super Bock red and trendy: wooden eating utensils, recyclable cups, vegan options — the works. There are Multibancos everywhere, and, at the very edge of it all, a long row of custom graffitied public compost toilets. 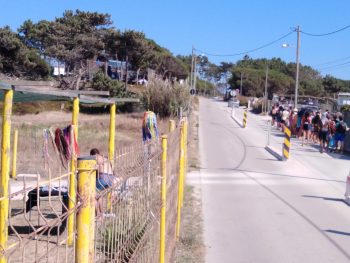 Back out by the main road are free roofless shuttles going to Meco beach every 20 minutes or so. Again, kudos to the organizers. The drivers of these are incredibly fun, and, in my humble opinion, one of the major highlights of the event. For example, when cheered on by their passengers to go faster, they do. They play loud fun tunes, dance, and even race each other, and set the mood for the evening perfectly. At the drop-off point at the beach, there is a waiting crowd of SBSR-ers, and a Stranger Things themed ice cream van. And someone is selling custom-made dreads by the road. I go for a quick swim (there’s zero nudity) and come back by 18h.

Hoards of fans are making their way between the various stages now and there’s music everywhere. Galgo, Conjunto Corona, Fugly, all local artists, and Calexico and Iron Wine (from Arizona and L.A.) have been getting the kids pumped since 17h, drawing decent crowds in turn. Surprisingly, the sound from each individual stage is crisp and loud, and despite the open field, the acts do not interfere with each other at all, soundwise. Somebody thought this through.

At around 19h, half of the crowd, including myself, gravitates towards the Super Bock stage at the far edge for Shame. The British punk-rockers file out around 19h30, and proceed to deliver an impressive, high-energy and low-maintenance performance. Frontman Charlie Steen thanks Portugal for a second gig here, adding “Portugal, Portugal, Portugal… You’re all so fucking beautiful… this is all very strange.” He chugs numerous Super Bocks and a few water bottles, kicking one into the crowd. “And your beautiful Super Super Super Bock,” he explains, “Super Bock… we’re just trying to get some money… we need a promotion.” Charlie sings, screams, kicks, spits, runs around the stage, incorporates his surroundings, gets shirtless, sweaty, interacts with the audience often, and eventually stage dives and crowd surfs, successfully; the band seems to be enjoying themselves the whole time too, which is important. As these kinds of things go, the audience at the front is moshing, heads in the back are bopping, and everybody seems into it. As the sun slowly sets and Charlie repeatedly screams “shame” with an almost lost voice, the set comes to an end, and punk rock feels alive again. 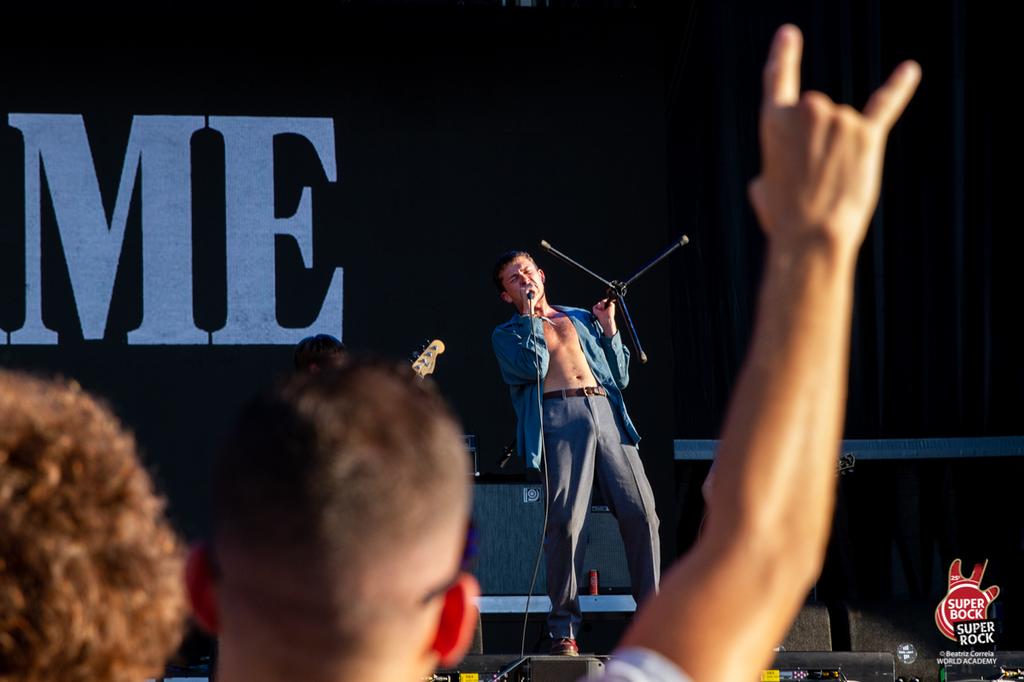 Around 20h30 there is new movement among the people: a good chunk drifts back towards the EDP stage for Capitão Fausto, one of the bigger local names in this year’s festival. Incidentally, a commonly voiced concern in recent years has been that Super Bock Super Rock’s been “losing its ‘rock’ element” by inviting the likes of, say, Stormzy and Lana Del Rey to headline. Labels are tricky — sometimes they just rhyme well with a brand name — but, if we are to use them, Capitão Fausto is rock. Not necessarily hard or punk, more pop, but whatever. There are probably more instruments than DJ decks this year than last if that’s saying anything, but the acts are mostly stand alone in terms of genres and backgrounds. 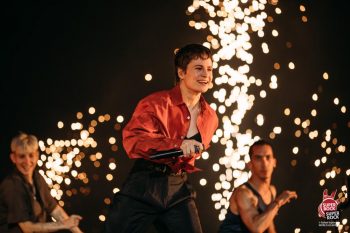 I stick around for Christine and the Queens at 21h, who, if we are to continue using labels, fall more in the dance category. “My name is Christine but because it’s summer and I’m lazy you can call me Chris,” she says as she emerges… To each their own. “We’re gonna dance together, ok?” she adds. The crowd is big — there are obviously many people here just to see her. As darkness falls and the valley lights up, the giant screens projecting Christine’s and sometimes the Queens’ well-choreographed, Madonna-esque dance moves illuminate the sea of faceless heads below. Christine, when not dancing, talks often — about herself, and feminism, about not fitting in, and about safe spaces. She points out “the discotheque” as being one for her. She, too, gets shirtless halfway through the set (but keeps on a small black bra, again reminiscent of a way pre-Portugal Madonna). There’s a personalized version of Bowie’s “Heroes” that’s not very good. At some point, the audience struggles with the words of a sing-along as Christine insists “Louder!” It ends well, though, with Christine expressing her love for Portugal (but not Super Bock) and introducing the ever-silent Queens one by one, and then bowing out to extensive applause and whistles.

It’s around 22h now, and I hurry back across the valley to the EDP stage for Charlotte Gainsborough, her band, and arguably the best performance of the evening. The EDP stage is not huge and has no screens, but this one definitely has the most set design: florescent lightbulbs flash with the music and move intricately, at right angles, around the seven musicians (all dressed in white) throughout the show. Like the video for “Such a Remarkable Day” basically. There is minimal on-stage banter, but there is a subtle choreography, and the chemistry between the group is easy to sense. The songs are flawless, Charlotte introduces one or two by name. She also practices her obrigada, adding softly “I really like… really love the Portuguese language.” The crowd for this one is not as huge as one might expect for a name this big. It’s an obvious mix of dedicated fans and newcomers, and the majority here is at least as old as the festival. They play a good 15 songs, Charlotte introduces every member, thanks them, and Portugal, the fluorescents go out, and the audience is happy.

At 23h30 the whole venue is lit up like a gigantic club with no roof; three of the four stages and all the stands have loads of people around and festive things happening. The biggest of these things is Phoenix, drawing the largest crowd so far well before they even start. French-speakers, by the way, seem to be the majority of foreign acts this year. Pheonix takes the stage, slowly emerging, you know, like a phoenix, into the flashing lights, with all sorts of psychedelic imagery on the screens around them. 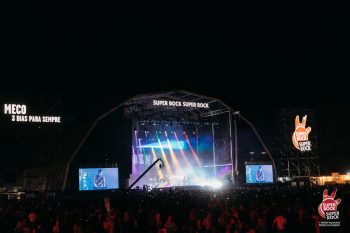 The whistling and excitement feel louder than with the previous acts, and there are hundreds of people dancing now. Phoenix says hello and obrigado, but doesn’t interact with the audience too much. They play most of their well-known hits, with “Too young” eliciting roaring approval, and a version of “Ti Amo,” a song and the tile of their latest record, is improvisationally catered to Portugal. At one point, the whole band leads the audience in a funky hand wave to a Prince song. Meanwhile, Belgian rapper Roméo Elvis is holding his own on the semi-enclosed Somersby Stage back by the entrance. Again, some might argue that this is not rock, but it feels like he belongs here. The massive crowd he’s pulled suggests that many came here just for him too, but Phoenix is tough competition. Even though France seems to be a major influence this year, most of the acts surprisingly choose to speak English.

At around 01h Phoenix departs, and so do a few attendees — checking phones, finding their friends and/or bearings — but not many. The night is young. The atmosphere is fun and relaxed, security and staff seem to be enjoying themselves too; there are no incidents, on or off stage, as of yet. Brits Ezra Collective keep things rolling smoothly with some mostly instrumental jazz, French multiinstrumentalist French Kiwi Juice (FKJ), who got married earlier this year and is doing a U.S. tour in August, adds some experimental and improvisation house tunes. 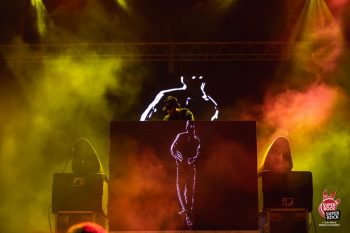 It’s approaching 3h, and Haitian-Canadian DJ and hip-hopper Kaytranada has turned the area in front of the Super Bock stage into a rave of sorts, with smoke machines, some crazy visuals, and a very high energy set. But it’s also that time of night where people pay a little more attention to each other than the acts, rock or other. It’s going to be a while before things start to quiet down. I need to be back in Lisbon in the morning and am beat (sorry, “ambassador of boogie-funk” and closer Dâm-Funk,)— fortunately, the organizers also have shuttles going back to Praça de Espanha between 2h and 5h.

I make my way up the hill along with dozens of scattered partied-out revelers, past the half-sleeping tent villages. The festival, and the sounds, fade into the darkness behind us. We don’t have to wait long for the bus. As it takes off, it’s only half-full — the majority is staying until the morning at least, and there’s plenty of Super Bock left to facilitate the party.