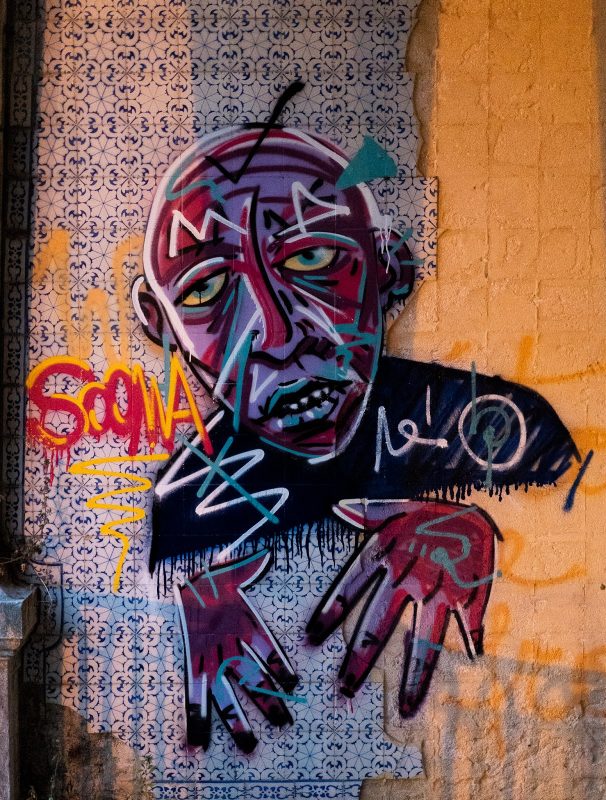 A graphic designer by trade, Sooma has turned the forgotten ruins of Quinta das Aguias into his own private art gallery and talks to Atlas about what the beautiful palace could become. As in, not another hotel...

Unless you read Atlas’ in-depth investigation into the forgotten ruins of Quinta das Aguias, you might not be aware of one diamond in the rough that sits between Belém and Alcântara. This gem of untapped potential lays masked by wild overgrowth, and as the days come and go, the tiles and paint chip away, and slowly but surely it joins the sands of time. Could it, however, be saved by the hands and cans of street artists?

With a 20 million euro price tag, it comes as no surprise that Quinta das Águias has laid untouched for so long. However, while this palace is forgotten by some, there are others who imagine something brighter. I had the opportunity to meet with one such person — a graffiti artist who sees a future flickering within the crumbling tiles of Quinta das Águias.

Arriving in Lisbon from his home city of Leipzig, Sooma is a graphic designer by trade. Although not a devout graffiti artist, his appreciation and passion for painting has allowed him to branch out into territories less traveled. With this passion, he saw the opportunity to create his own art gallery in Quinta das Aguias and struck with canisters fully-loaded.

What got you into graffiti?
I’m pretty much into hip-hop. When we were kids, it was the cool thing to do, right? I was drawing anyway. And then, to put it on walls, to make it big so it can stand out… it was just exciting. You have a crew, you go outside at night, you do some crazy stuff, and then you can look at it during the day and feel proud that you created something. 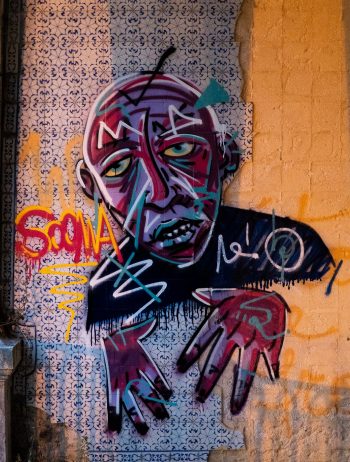 How would you define your style?
It’s characters with a comic book style, but it’s gotten more abstract over the years. So, it’s more, more, and more colors, shapes that like, it started with the face, and I try to make the face look crazier than a normal face would look. [A] bit weirder. I don’t really draw or paint words, like most of my fellow graffiti artists would do.

There are some artists that I draw inspiration from, but I wouldn’t compare my style with a “graffiti style.” Like the one you think of when you think of graffiti. The big letters, maybe two or three colors, just like representing the crew or yourself. That’s what most people think of, and then you have the tags and everything but, you know, for me, it’s not about graffiti. I paint a lot, so it’s like having a big canvas and using the background. Especially with the place we went to [Quinta das Aguias] with the tiles, you can paint on tiles and then you have this amazing pattern in the back of your painting which is really cool. And it’s something you don’t get in most places.

What do you think about [Quinta das Aguias] as a whole?
I think it’s really interesting that it’s empty, which is weird to me. Because… it’s a fucking palace, it’s huge. There was probably one rich family living in there or something like that, but now, if you renovate it, you could easily house like 30 people or something like that. The rooms are huge, high ceilings, it’s a dream house, but it’s completely destroyed. There’s no electricity or water. Also, there’s a back house which is a modern kind of house. They probably built it and then realized, “oh no we ran out of money” and had to close up. It’s perfect for a start-up or something, a big open space. 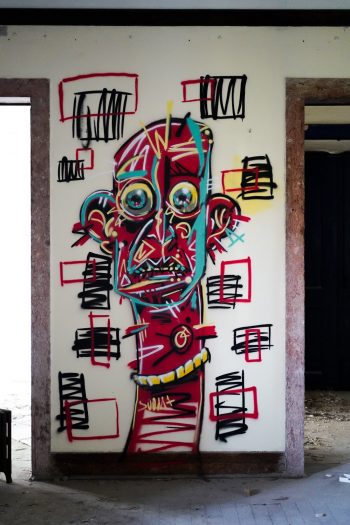 How would you describe how the palace is being used right now?
Well, I use it as a canvas (laughs). I think a lot of people do, but not as many as I first thought, because when I first went there I painted something and then I came back maybe a month later and there was no new stuff.

In Germany, a place like this, you paint something, you come back a week later and your painting is gone. But here, I don’t know, maybe most people don’t know about the place. I’m happy that my stuff is still there… turn it into a gallery.

Do you think there should be anything else done with the palace?
I think it would be really cool to turn the whole place into an art-space. With these high walls, if you renovated the thing, it’s just the perfect place for a gallery. Like, for an actual gallery. And then you can also have artist residences upstairs.

If you owned the place, what would you do with it?
I would do exactly that. Turn it into a creative space, have a gallery downstairs, have art ateliers, studios upstairs or maybe also downstairs. Depends how big the gallery has to be, but have a gallery and artist residencies. You can also do some crazy parties, like Great Gatsby style… but this will not happen because I don’t have 20 million. 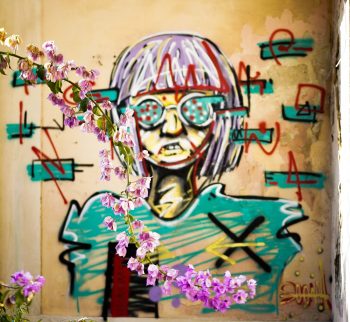 Anything else that you want to say?
Please don’t turn it into a hotel, please leave it empty or do something cool with it. And, uh… maybe come by and look at my paintings. You don’t have to, though. All good.

Even though Quinta das Aguias is a canvas for but a few artists at the moment, it has the potential for many more. So who knows, maybe one day this old palace will become an art gallery, a workspace, maybe even a museum… as long as it’s not a hotel.