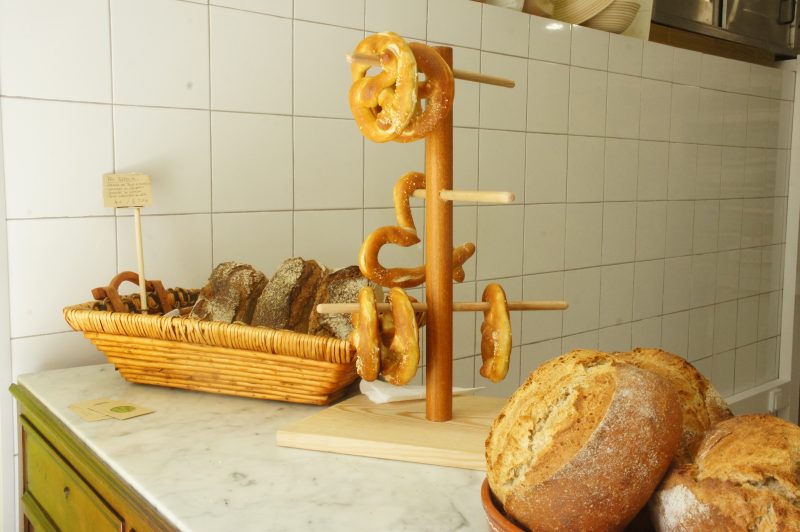 Flour, Water, and Salt: the Best Sourdough Bread in Lisbon

Italians like to tell an anecdote about a baker’s helper who, apparently suffering from a drinking problem, arrived to work with a bottle of beer and accidentally poured a drop of alcohol into the dough.

The consequences couldn’t go unnoticed: loaves came out wonderfully big and plump. Since the chief baker wanted to know what made them so, the poor helper had to reveal the truth. Whether he kept his employment or not remains unknown. Yet, if the story is to be believed, it was thanks to his misconduct that the yeast-raised bread was invented.

Long before that, however, another type of fermentation process was already known and effectively used for bread-making. What we now call a sourdough starter was first produced in Ancient Egypt, when the bits of old, slightly acidic loaves got incorporated to the new dough. Bread produced with this method could be made with the simplest ingredients — flour, water, and salt — and it was not only highly nutritious but also kept fresh much longer. As the knowledge spread with politics and wars, bread soon became the basic product, up to the point that salaries would often be paid in freshly baked loaves.

Hard times for sourdough came with the fall of the Roman Empire: since the Barbarians weren’t avid bread-eaters, the tradition of manufacturing springy loaves only survived in monasteries. From the 12th century on, the situation got better. Yet, as the demand for bread was constantly rising and the sourdough baking process was not only time-consuming but also required certain skills, technological progress was badly needed. And that’s, most probably, when the aforementioned baker’s helper entered the story.

With the introduction of yeast, the leavening process became quicker and simpler, making mechanized bread production possible. From the 19th century on, sourdough baking was slowly turning into an obscure art again. Yet, just like its starter cultures, it turns out to be ever-lasting and nowadays is seeing another revival. After having taken Silicon Valley and many renowned restaurants by storm, it has reached Lisbon’s neighborhoods, too. Here’s where to find the tastiest loaves:

Opened at the end of 2016, Gleba was one of the very first places in Lisbon to bring back the marvels of sourdough bread. The person behind it is Diogo Amorim, a 23-year-old with an impressive knowledge of his profession. He was first introduced to the sourdough during an internship in England’s the Fat Duck — one of the world’s best restaurants, awarded three Michelin stars. The idea of creating Gleba popped up shortly after and quickly turned into a much broader project: Diogo’s goal was not only to bake good bread but to actually renew the forgotten art behind it. For this reason, he started by finding farmers who still cultivate old varieties of grains. Then, he reinstated a granite-stone quern — a type of hand-operated mill — that’s almost a century old. All of this to produce flour of the best possible quality.

Every day, Gleba offers two types of wheat bread (one based on grains from Trás-Os-Montes, the other from Alentejo), one type of rye bread, and a traditional cornbread. Apart from that, they have specialty bread inspired by different seasonal ingredients, such as dried tomatoes and rosemary, figs and almonds, and dark chocolate and blueberries.

For Isco, it all began with a blog: Zine de Pão. Created in 2011, it might have been Portugal’s first site fully dedicated to the art of sourdough baking. For a couple of years, its author, Paulo Sebastião, shared his knowledge about bread-making, posting recipes for home-made doughs, introductory notes on the basic equipment, and concise articles on his authorities (among whom, of course, was Diogo Amorim.) Sounds nerdy, but the combination of passionate writing and mouthwatering photos quickly attracted similarly minded enthusiasts. Soon Paulo found himself touring around Portugal with workshops dedicated to sourdough baking. The next step was making use of the experience gained in Bageri Petrus in Stockholm to open his own bakery.

Isco welcomes not only with the smell of the freshly baked bread and sweet pastries but, above everything else, a comforting, homely atmosphere. Coffee is served with a smile, and the yellow cups are the perfect match to the sky-blue tabletops. The best part, however, is that both the ovens and the worktop are right by the counter, which makes it possible to take a glimpse at the bakers’ work.

The bakery, run by Laura Balser, is the real hidden gem. To get there, one has to either pass through the garden and climb up some steep stairs or meander through narrow streets and not lose faith when finding a closed gate at number 44. As the owner explains, “it’s better for the bread, as it can really rise in peace.”

Laura is German, but she has lived in Portugal for 12 years and decided to open Pão com Calma because she missed a very particular taste of the bread baked back home. To recreate the flavor as faithfully as possible, she makes the flour herself and, in order to keep the grains coarse, uses stone querns. The effect is more than satisfying: Laura’s loaves are dark and more acidic, with a crunchy crust and dense, sticky crumb. And those who have ever felt homesick for this type of bread know that when paired with a bit of salted butter and soft-boiled eggs, it makes a divine breakfast.

Similarly to Gleba, Pão com Calma offers three basic types of bread: wheat, rye, and mixed flour with sunflower and flax seeds. Apart from that, there are also pretzels, which make great company to craft beer.