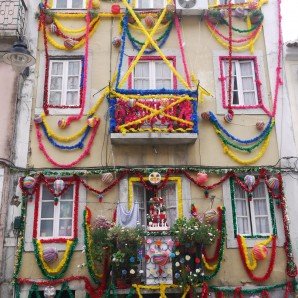 Though the biggest party is always the 12th of June, the eve of Saint Anthony day, the whole month of June is akin to America's 4th of July.

Though the biggest party is always the 12th of June, the eve of Saint Anthony day, the whole month of June is akin to America’s 4th of July. The feast days of the popular saints (festas dos Santos Populares) is held in every street, neighborhood, and public square of the city. The biggest street party of the year might sound religious in nature, but trust me, it’s really all about sardines, beer, and irritatingly catchy folk music called pimba, which can only be described as slightly polka sounding songs that focus on squeaky-clean lyrics with sexual undertones. Click here for an example.

Find out why St. Anthony is celebrated, why sardines are involved, how to assure you get kissed, where you’re supposed to be, and what to avoid.

So, why St. Anthony? Glad you asked. Saint Anthony of Padua was born in Lisbon at the Largo Santo Antonio à Sé, Alfama. He is the city’s patron saint, revered as a matchmaker, protector of young brides and patron of the lost and found. This last one strikes me as particularly funny, considering the fact that if you get separated from your group, good luck meeting up again unless you have a damn good contingency plan. The streets, particularly in Alfama and Barrio Alto, are shoulder-to-shoulder with merrymakers, winding in and out of tight corridors (on this day referred to as “bathrooms”), trying not to gesture too wildly so as not to prevent their arm hair from being singed by a nearby sardine grill.

So, why sardines? In the 13th century, St. Anthony spent some time in Italy. I guess the locals were too busy riding their scooters and eating spaghetti, because no one would listen to the poor guy speak. In typical Portuguese fashion, St. Anthony sought out the coast to deal with his depression, and ended up giving a sermon to row upon row of fish that popped their heads out of the water to listen, mouths wide open to show respect. (That, or clever St. Anthony had a ton of pasteis da nata in his pocket.)

So what does this mean for you? If you’re a single lady, there are all sorts of tricks you can do to appeal to the matchmaking saint. One trick includes holding water in your mouth until you hear a man’s name, another requires you to invert your beloved St. Anthony action figure so that he finds you a match, there are many. If you’re a single guy, all you really have to do is give a basil plant with a love poem hiding inside to your crush. Chances are she’s exhausted and half-drowned enough to give you a kiss.

So what’s on for the Festas this year?

Since pretty much every neighborhood rolls in a truck full of beer and re-purposes trash cans and the like to function as grills, Atlas recommends just walking around from one to the next.

Wanna make an altar? It’s a tradition. Go to The Museum of Lisbon starting from May 15 to pick up the structures of thrones so you can decorate and present them on June 4th and 5th to the public. The thrones will be staying in exhibition during the whole period of the festas.

Check out what’s in store this year on the Festas Lisboa Official webpage.