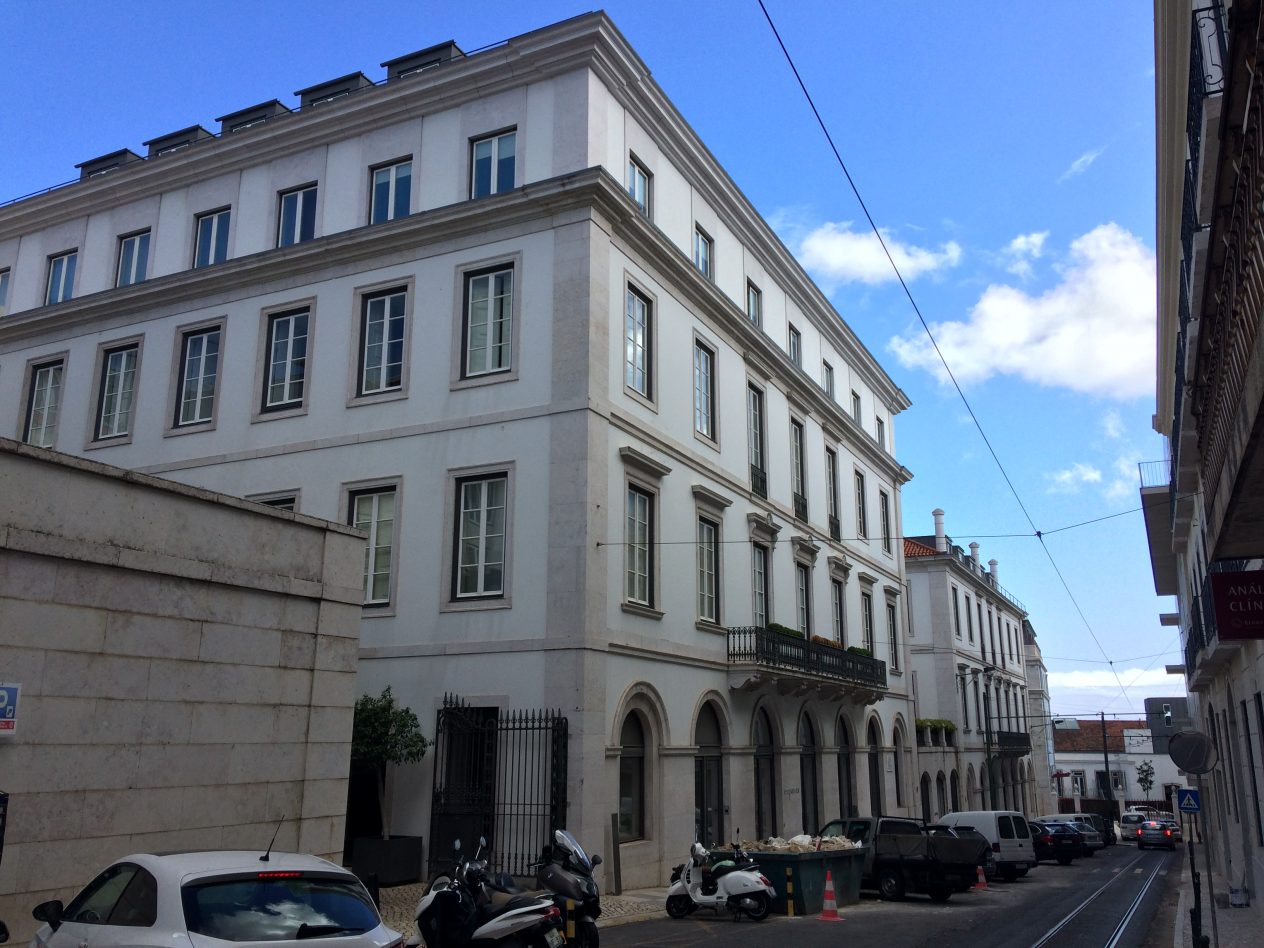 The Carnation Revolution — aka 25 de Abril — is the moment when the Estado Novo regime was overthrown and Portugal set out on its path to democracy. It is hailed as a non-violent revolution, with the most famous images being of bright red carnations placed in the barrels of soldiers’ guns. But, while it’s true that, as far as revolutions go, it was relatively bloodless, there were, in fact, several people killed and many more wounded.

If you trust poorly-researched listicles or generally accepted history, there were four people killed that day in Lisbon. The perpetrators were officers of PIDE, Portugal’s notorious secret police under the Estado Novo regime. The killing occurred outside the agency’s headquarters on Rua António Maria Cardoso, and the four people killed, along with 45 wounded, became the final victims of Salazar’s secret police. According to a plaque where they died, these men were:

The term “men” is used in the loosest sense since one report claims that Fernando Gesteira was just 18 at the time of his death and, since most reported wounded were only in their teens or 20s, it’s safe to assume the other three victims were also barely out of boyhood.

Beyond this, it’s hard to know who these men were, what political convictions they held, or what their lives were like, since they are rarely mentioned when 25 de Abril is discussed. In fact, the historical information point erected in 2010 at the former PIDE headquarters doesn’t even give their names. It simply states that “agents opened fire on the crowd, killing some and wounding many others.” Four lives reduced to a single word — “some.”

Why Would Civilians March on Armed Police?

To understand why a crowd of young demonstrators would want to confront PIDE, we only need look at who they were and what they did. If you’re interested in a more in-depth history of PIDE, read this review of Museu do Ajube (or go to the museum, it’s really good). But, in short, they were the violent arm of Estado Novo. A secret police force that detained, tortured, and killed political prisoners. In 1969, when Marcello Caetano (the last prime minister of the Estado Novo regime) was in power, PIDE became the DGS (Direcção-Geral de Segurança), but their ruthless legacy never faded.

So, when the revolution “succeeded,” and the old regime fell, the building where many people’s friends, families, and allies had been detained — the PIDE headquarters on Rua António Maria Cardoso — made an obvious target.

Despite 25 de Abril now being considered a popular revolution, it was never planned as such and was, in fact, a military coup. On the night of April 24th, 1974, at 22:55, E Depois do Adeus was broadcast by the Associated Broadcasters of Lisbon, signaling to the Movimento das Forças Armadas (MFA) to begin maneuvering. This was followed just over an hour later by the more famous Grândola Vila Morena by José Afonso at 00:20, indicating that strategic locations should be taken and marking a point of no return.

Over the next several hours, key buildings such as RTP, the airport, Banco de Portugal, and the headquarters of the Lisbon Military Region were stormed, and, despite the MFA repeatedly asking civilians to stay indoors, the people of Lisbon flooded the streets to rejoice in the collapse of fascism in Portugal.

These crowds drifted around the city, from Largo do Carmo (where Marcelo Caetano had barricaded himself), up and down Chiado, and in Terreiro do Paço. There were chants and calls for democracy, the end of colonialism, and, inevitably, retribution on PIDE, who had instilled terror in the population for so long.

Eventually, as the evening drew on, crowds called for the PIDE building to be taken. And so, a little before 20:00, a group of more than 600 demonstrators, including Fernando C. Gesteira, José J. Barneto, Fernando Barreiros dos Reis, and José Guilherme R. Arruda, approached Rua António Maria Cardoso. Here, as the rain fell, PIDE agents opened fire from the first-floor windows, injuring 45 and killing the four recorded casualties of the revolution. 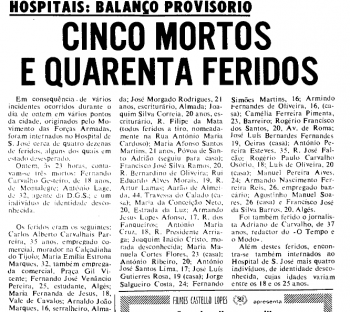 The Aftermath of the Shootings

Immediately after the shooting, the crowd dispersed, but they quickly returned, and this time with the army who, hearing the shots from Largo de Carmo, had rushed across Chiado to the PIDE headquarters. Thus began an armed standoff that would last well into the next day.

This is the point at which we uncover that these four men were, in fact, not the only casualties of the revolution. There was another man killed that day, and on that very same street. He was, however, on the wrong side of history — a 32-year-old DGS agent named Antonio Lage. An account of his death was given in a paper the following day:

“The weapons of the Army continued to be pointed at the headquarters of the DGS. The situation seemed to be deadlocked when one of the agents went out onto the street with his hands in the air to address the soldiers. As they watched him, the crowd cried out for his death. Terrified, the officer tried to flee, only stopping when a bullet from the Army struck him dead.”

But it didn’t end there. When firefighters came to retrieve his body, they were stopped by the crowd who shouted: “The PIDEs die on the street.”

The fact that he was the only casualty on the side of Estado Novo wasn’t through lack of trying, however. The body count very nearly rose when three more agents left the PIDE building with their hands raised. Immediately detained, searched, and placed against a wall, the agents were almost killed as the crowd pelted them with cobblestones — only stopped by the intervention of the army.

Just around the corner, in Largo da Misericórdia, another three DGS agents were almost killed after a crowd tried to “lynch” them before the army intervened. The soldiers who were searching the three agents were forced to shoot into the air to disperse the approaching mob. Not that it was very effective, with one individual bursting through the lines and managing to “hit one of the detainees with several punches” until he bled “from his head,” according to a Diario de Lisboa report the following day.

And these were far from isolated incidents, with papers reporting multiple “shootouts” across Lisbon resulting in numerous serious injuries. 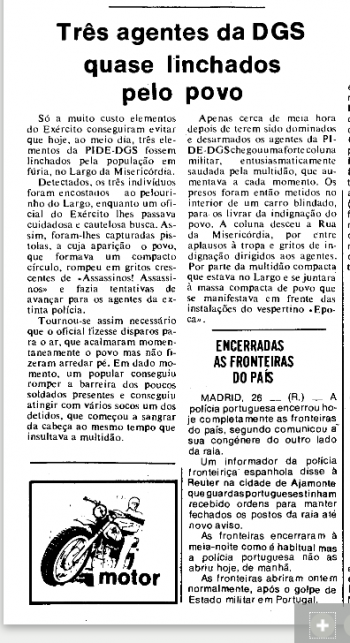 Six years passed before PIDE’s final four victims were memorialized, when, in 1980, a group of citizens had a plaque installed, stating:

Fast forward less than three decades and the building that once housed political prisoners and their torturers was renovated into luxury apartments by Gestão de Fondos Imobiliários. This, of course, caused outrage at the time, with protesters calling for it instead to be used to remember Salazar’s victims — similar to the Topography of Terror museum in Berlin.

To add insult to injury, the plaque that celebrated the four fallen men disappeared during the renovations, before public outcry forced a new one to be erected. The developers’ actions aren’t that surprising: surely they’d want to distance the building from its tarnished past — one that is so recent that forensic teams allegedly found blood still on the walls during construction.

Today, high-end housing and a handful of expensive retailers continue to occupy the building, and their proprietors either don’t know the history of the five men killed or, in the case of the managers of one luxury kitchen appliance shop, have “no opinion” on their building’s PIDE past.

Why Were the Four Men Not Martyred?

The fact that soldiers and crowds did carry out violent actions across the city may give us a clue as to why the four men killed by PIDE are rarely, if ever, mentioned. For to do so would be to admit that there was violence that day. This would inevitably lead to further questions about what happened to the agents, whether vigilante justice took place, and if there were any repercussions. It is much easier to continue publishing images of flowers in guns and celebrating peace, even at the expense of remembering four fallen revolutionaries.

As we sit here in relative liberty, we are in no position to judge the actions that people took on April 25, 1974. But you don’t have to judge to remember, and it is important that we do at least that, rather than continue to simply accept the stories we are told.

For a little more information on the revolution itself, check out this fantastic article by Atlas contributor David Soares.

[Edit: A recent publication has bumped up this figure to six people killed]