The Corkman Arrives in Almada

In 1882, the Cork Distilleries Company hired a spritely young man by the name of Paddy Flaherty. Paddy was a salesman, and a damn good one at that, heading to all the bars of Cork, Ireland, to peddle his wares in a time-tested manner — charm and drunkenness. Also known as “tastings,” as Paddy handed out free rounds of whiskey to thirsty punters. 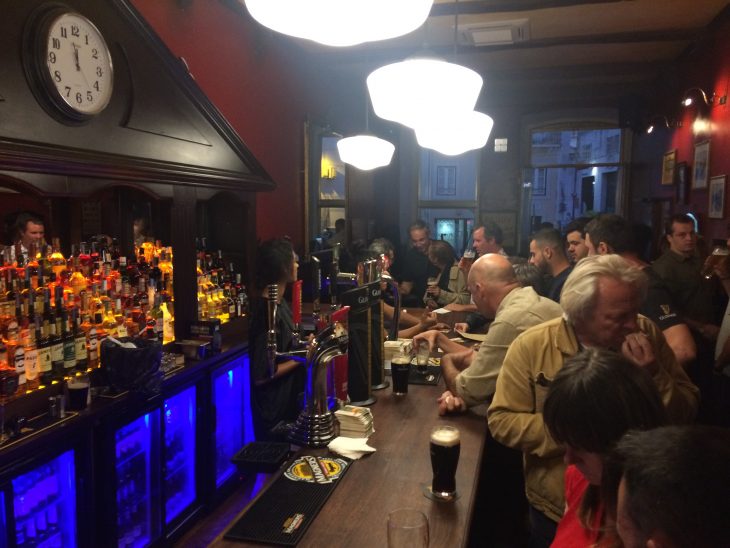 Paddy continued in his job, bottle in hand, and became so well known and liked that when the publicans of Cork came to reorder cases of the Cork Distilleries Company Old Irish Whiskey (a mouthful of a name), they simply asked for “Paddy Flaherty’s whiskey.” The years went by and, finally, in 1912, realizing that the whiskey was better known as Paddy Flaherty’s and, presumably, that their original name was rubbish, they officially renamed the whiskey “Paddy Irish Whiskey.”

Why should any of us care about Paddy Flaherty? One, look at the big, not-so-bold byline of this article. Two, it is the whiskey brand that adorns not one, but two of the large, vintage mirrors in Almada’s latest bar — The Corkman.

The oh-so-Irish establishment opened this week to much fanfare, serving up cool pints of Guinness just in time for the summer rush. The traditional bar, high ceilings, and wooden walls give it a cozy feel while the esplanada allows for the perfect summer evening drinks. And, with an attached kitchen, it is a great stop at the head of Cacilhas’ main strip.

If you’re familiar with Hennessy’s and O’Gilins on this side of the river, you will feel at home in the Corkman, which has the old-country feel in a new-town location. A location that is becoming increasingly popular as house prices push many of us out of Lisbon proper. I have no doubt that Cacilhas and Almada at large will very quickly become one of the hipper neighborhoods for those looking to live in Lisbon, and rightly so, considering the (relatively) cheap rents, burgeoning new nightlife, and the short, enjoyable ferry ride across the Tejo. And, to greet all the new Lisboetas will be the Corkman in all its glory, with pints, food, and live music set to make this a nightlife hub in the quiet center.

Check it out on your next trip across the Tejo.