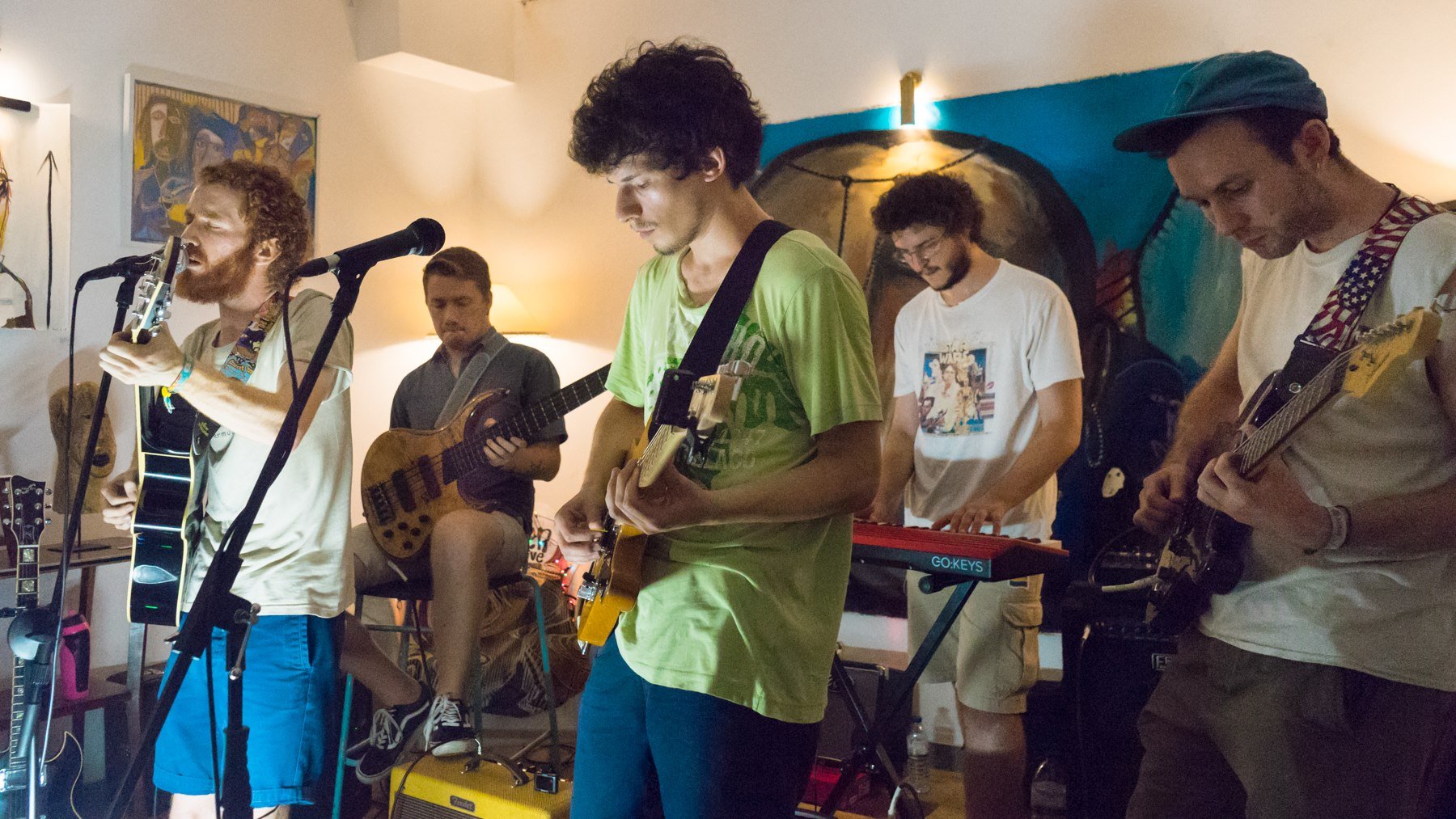 What The Fekk? A Chat with the Fekks

After playing a live show for the Garden Collective, The Fekks sat down with Atlas to discuss their new EP, creative flow, and all things music.

After playing a live show for the Garden Collective earlier this month, The Fekks sat down with Atlas to discuss their new EP, creative flow, and all things music. “We are always going to be the harshest critics of our own work… but even when you tell yourself that, it doesn’t make it easier to get around,” says Aran, the Fekks’ lead singer and guitarist.

It’s hard to really know how many members there are in the Fekks, as they have a list of both “controversial” and “honorary” members. Their recent EP “Sad Circus” has seen them juggling members once again. Atlas got to chat with Aran, Fran (guitarist) and Chris (synths), who are the only three members that escape the aforementioned titles.

“We haven’t really existed as a live band, although we are technically together nine years now,” Chris says. “We shut down the venues that we play quite often. It’s two out of three right now.”

All jokes aside, the recently released EP showcases the sound of a band who have productively replaced missed gigging time with hours of refining, rewriting, and improving on their own sound. It’s a hard thing to make the complex sound simple, and these guys have done a good job of doing just that.

The music industry is a tough nut to crack here in Lisbon for smaller DIY bands, with no distinctive bridging point from the garage practice room to the stage of intermediate venues that support live music, such as Musicbox or Sabotage. The Fekks have been dealing with this for quite a while now.

“We haven’t experienced too many venues here in Portugal that has the music crowd there already,” Aran says. “Anywhere we have played, we have had to bring our own crowd… but things are definitely changing.”

“Portugal is a forgiving place also,” he says. “If you’re just starting out, people won’t necessarily boo you off stage or piss in a cup and throw it at you.”

That said, the Fekks recently headlined an event held by the Garden Collective in Má Língua with their first live performance since the EP release. And, as expected, it was welcomed with open arms by a crowd that had been eased into the gig with performances from Jenny Hayes, Shaka’s Lo-Fi Experience, Palavra Lisboa, and Ilyushka.

Tell me a bit about your songwriting process:

“I have always liked writing the music and melodies but hoped that someone else would come along to sing and write the lyrics,” says Aran, whose voice sometimes sounds more like that of a synth melody line than it does a voice. Maybe he just doesn’t want us to hear his lyrics, but it has its own beauty to it.

“It’s one of the main reasons we never did covers. Even if I had known a song for years, I would have to sit down and try to learn the lyrics. I just ended up agonizing over them,” Aran says.

However, in an unexpected turn of events, the recent show at Má Língua saw the Fekks finish their set with “Teenage Dirtbag” by Wheatus after the crowd called for “One more tune!” They had the whole room singing along while taking a stroll down memory lane.

“We tried recording a song last year,” Aran says, “and when we had finished everything — nearly there, just the vocals left — I just couldn’t do it. It was a psychological barrier. This happened again, and I started to realize that this was becoming a problem. So we just decided, ‘Ok, fuck it!’ Let’s work on what we have.”

The end result of this “Ok, Fuck it” moment is “Sad Circus,” and although the lads reassure me that there are plenty of things they would improve on, I think the end product is a mature, well-presented sound to back up some fantastic songwriting.

“You have to start somewhere, it may not be perfect, but you just get it done,” Aran says. “Just the idea of finishing it was great!”

They recorded, mixed, and mastered it themselves and figured out all the finer details of the process “from one youtube video in particular, so it’s not perfect,” but Fran (the guitarist) is “obsessed with that side of the process.”

“The whole process was a learning curve and made to prove its own limitations,” Aran says.

What I love about this EP, and the band, is that while there is a level of seriousness about the music, these guys are not afraid to joke about it and point out the stereotypes of the industry they are pushing to be part of. The theme of the EP reflects this. It is a performance, it is a piece of art, and it may or may not have people going to listen to it, but let’s put it out there anyway and despair if we may.

“We would write about ourselves in the third person, but we are not famous enough yet,” reads the Fekks’ Facebook page.

We expect great things for the future of this nine-year-old but still youthful band of Cascais locals and urge you to give their recent release a listen and keep up to date with them on Facebook and Instagram.