A Chat with the Artist: Valdemar Dória 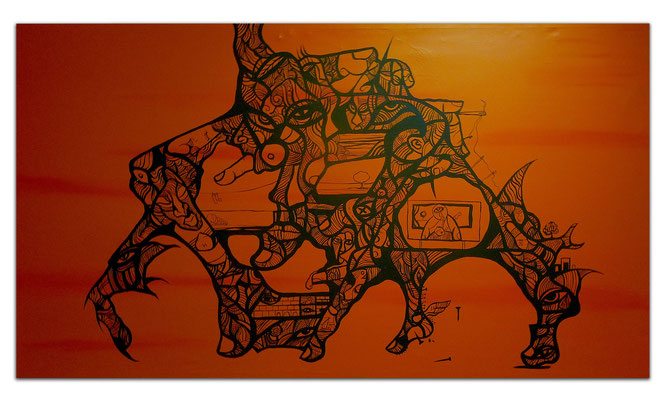 in January 2015, Ordem dos Avogados hosted a dozen recent paintings and drawings by Valdemar Doria, a São Tomé artist who has called Lisbon home on and off for over 20 years. We visited the show and chatted with the artist to ask about his process, his roots, and his advice to young artists.

This was Doria’s first solo exhibit in Lisbon in 2015, and a chance for art lovers to get acquainted with an artist that already shows incredible maturity in his style, composition, and execution.

Since then he has exhibited at ISPA and Clube de Jornalistas among others. Some of the works from these gallery shows are still available for purchase. 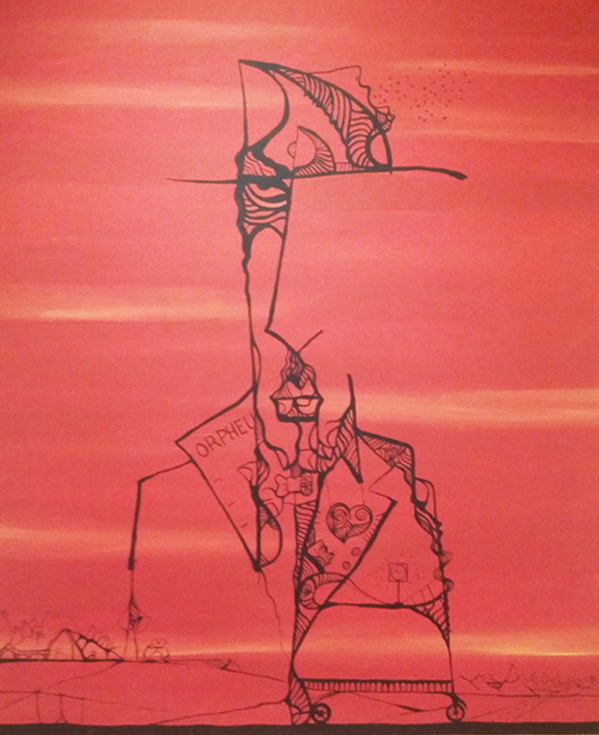 Lisbon takes center stage at the show. Atlas’ favorite, part of a series of bright-orange canvasses adorned with sharp smooth black lines, is a nod to fellow São Toméan, José Sobral de Almada Negreiros, Doria says. Along with native son Fernando Pessoa, Negreiros was one of the avant-garde founders of the controversial modernist literature journal Orpheu — also the title of Doria’s painting. This “portrait” of Pessoa is composed of symbols from Lisbon’s bica culture, swallows, a fadista, the aqueduct, a filigree heart — it’s as if you are sharing insider information with the artist while on a spiritual tour through the city.

“No matter how much chaos is around me, I try to keep it simple, with love, anger, frustration – basic human emotion.”

Doria’s lines, whether on a simple portrait or on an involved composite of images, are always exquisitely clean and deliberate, which gives his canvasses a playful, carefree appearance — at first. On larger, more intricate paintings, individual images that combine into bigger wholes (in often spectacular ways) are by themselves easy to see with just a little effort.

But look at any detail for just a few seconds and your eye and mind start to travel: Dória’s larger paintings are stories weaved into more stories, each painting a roadmap to a series of passions and pains, humor and longing, often all on the same canvas, with several elements continuing from one painting to the next. At their core, they are doodles you would find in a diary — they are extremely personal. Unlike what most of us doodle, however, they are done with a practiced mastery and a dedication to going deeper, and this elevates them from the mere personal to the universal.

“I’ve been doing this for about 20 years and it’s not like a hobby, it’s like going to a doctor and telling him what’s in my head,” Dória says. “No matter how much chaos is around me, I try to keep it simple, with love, anger, frustration – basic human emotion.”

“Don’t quit. You have to be open to people willing to help you. Otherwise, it’s a hard fight — sometimes you get lucky, sometimes you don’t.”

Dória has been exhibiting since 1992. His work has been shown in Ireland in 2007, (at Dublin’s Temple Bar Square African Festival and at the Dun Laoghaire World Festival), in Antwerp in 2010, and at the Museu de Cidade in Campo Grande in Lisbon in 2012, during the 6th edition of the Art and Culture Biennial, a show which brought his works from a 2011 exposition in Sao Tomé.

His interest in drawing and painting, he says, started with the realization that he wanted to have a record of his thoughts, inspired, at the age of 12, by a visit to a friend who had years
and years of doodles in several sketchbooks.

“I always had it in me,” he says almost apologetically, “I just needed a push from someone or something. I guess that shelf of black sketchbooks is what did it.” Since then he has toyed with every medium he could get his hands on: oil, pastels, gouache, chalk, markers, ink, acrylic — basically, anything he could afford, he says.

No stranger to having to struggle financially as an artist, Doria has this to say to artists starting their careers: “The organization of time, space, and money are obviously the most important things for any artist.

“Don’t quit. You have to be open to people willing to help you. Otherwise, it’s a hard fight —sometimes you get lucky, sometimes you don’t. It’s all about the empathy.”

How the ancient bollards along Lisbon’s waterfront got a makeover that was inspired by covid, azulejo tiles, blueprints, machinery, and graffiti.

Born in Lisbon in 1984, painter David Arranhado started drawing in the late ’80s. At age 10 he was enrolled in Colegio Militar, where he did military stuff, shared a

Did you know that in Hellenistic astrology “the dog days” (named after Sirius, aka “The Dog Star”) were associated with drought, sudden thunderstorms, lethargy, fever, mad dogs, and bad luck? Yep…

“August, the summer’s last messenger of misery, is a hollow actor.”
Henry Rollins.

Mensagem is taking community journalism to a new level — because it’s including the city’s residents in its editorial process.