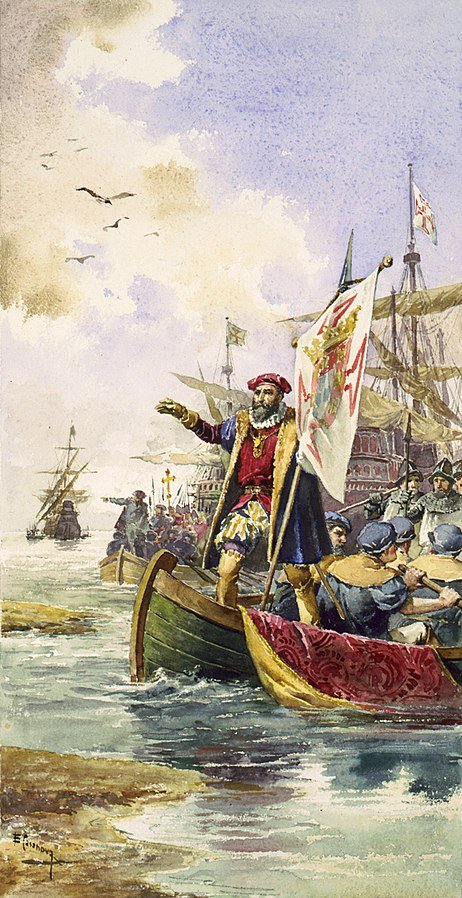 What connects the longest bridge within Europe, a crater on the moon, and a suburb of Cape Town? That’s right, Vasco da Gama, one of the most famous Portuguese explorers and the first European to reach India by sea.

Da Gama was born in c.1460 in the city of Sines, where his father was commander of the fortress. Like for many people of that time, little is known about his childhood and early adulthood. 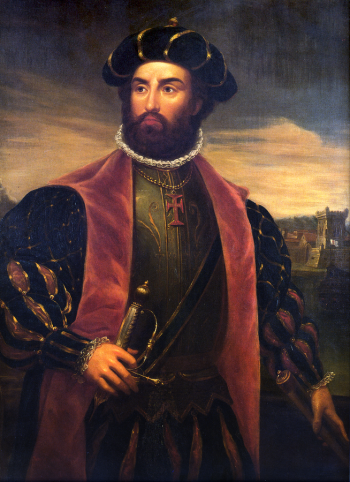 But we do know that in 1497, he was appointed commander of an expedition that was to establish a sea route to the East, and his fleet of four vessels set off on July 8 of that year. They sailed down the coast of Africa, before swinging outwards in an attempt to avoid unfavorable currents and round the Cape of Good Hope. Poor conditions stopped them doing this until November, when they successfully started up the east coast of Africa.

On April 14th, 1498, da Gama anchored at Malindi (in modern-day Kenya), where he met a Gujrati navigator who took him to India. On May 20, the expedition reached Calicut, where da Gama had a padrão (stone pillar) erected to prove his success. However, that is where his success ended for this expedition. He failed to secure a treaty with the ruler of Calicut due to poor-quality trade items, rude behavior, hostility from Arab traders, and de Gama’s belief that Hindus were Christians.

After a long, grueling journey back to Portugal, da Gama eventually reentered the city of Lisbon on September 9th, 1499. He had lost the majority of his crew — returning with just 55 of the original 170 — including his brother, Paulo. He was awarded an estate, a pension, and the title of Dom by King Manuel I.

This and subsequent voyages are what helped establish Portuguese colonialism in Asia, with Goa being a port of call for de Gama’s second voyage and later the heart of Portuguese imperialism in the region. Additionally, it was da Gama who, on his second voyage, established Portuguese outposts in Mozambique.

The entire “Age of Discovery” is rife with grave abuses by imperial powers, and da Gama was no exception. During his second voyage, it is alleged that he lay in wait for Arab traders, before taking their goods, shutting up to 400 passengers — including women and children — in the ship’s hold and setting it ablaze. Additionally, he threatened rulers in Africa into subservience as well as bombarding the city of Calicut in retribution and slaying dozens of its citizens.

Da Gama’s third and final voyage was in 1524, when he returned to India as the Portuguese viceroy in an attempt to curb the corruption among local officials there. Falling ill, he eventually died later that year, on December 24, 1524.

Vasco da Gama’s legacy lives on in many ways, most notably in Lisbon in the form of the Vasco da Gama bridge, which crosses the Tejo. There are also numerous football clubs, neighborhoods, and entire cities named after the explorer. He is, of course, memorialized on the Padrão dos Descobrimentos — one of Lisbon’s top attractions — as well as having various characters named after him. And, as mentioned before, there is even a Vasco da Gama crater on the moon.