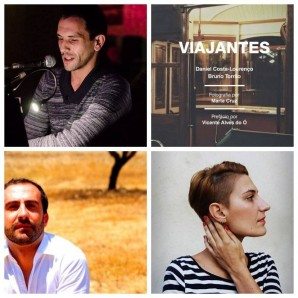 Viajantes: Poetry, Photos, and Maps for the Love of Lisbon

When we think of Lisbon, what comes to mind are the churches, monasteries, castles, and azulejos. We think of fado, and, naturally, the writings of Camões and Pessoa.

But that’s not all the city has to offer. Portuguese writing has evolved like the city itself. It is built on the same foundations, but what is built on top has changed with the passing of time. What makes the city so rich is its history and its newest generation of poets and artists who have been inspired by Lisboa.

We recently came across a book of poetry and photographs entitled Viajantes, or travelers, by lisboeta (lis-poeta?) poets Daniel Costa-Lourenço and Bruno Torrão and photographer Marta Cruz. We wanted to learn more.

In the video about Viajantes, you say (roughly translated from português): “It’s not a book of poetry, it’s a book with poetry.” What do you mean?

Costa-Lourenço: The book is based on the idea of three people traveling around the city aimlessly, without destination, admiring the streets, the light, and the people, but also thinking about their lives, their love stories, the future and the past.

Lisbon turns out to be the scene of this inner journey, but also a character, because it is not static, but dynamic, and the city itself tells stories and “talks” to these travelers. Thus, in the book we have poems by Bruno Torrão and me and photos by Marta Cruz. The styles of the three authors are very different and are not intended to coincide, but only to demonstrate, by our various nuances, the diversity of views that the city brings to both visitors and locals.

Tell me more about your background and the history of you and the co-author, Bruno Torrão. Were you born here? Have you known each other long?

Bruno was born on the outskirts of Lisbon and is a long-time writer. I have known him for many years and always liked his style of poetry. We never thought to cooperate, but when I started thinking about Viajantes, I just thought about asking Bruno to collaborate on the book. At that moment I felt like confronting my poetry with other styles and techniques of other artists.

Lisbon unveils so many feelings in people, so I thought that a book by three artists could offer more sensations and images to the reader than just one. I love collaborations because, as always, I learn a lot.

How did you begin collaborating with Marta Cruz, the photographer in the book? And where can we see more of her work?

Marta is a designer and a curator in Pequena Galeria, dedicated to photography. When we met, I proposed a partnership between Mar da Palha, my blog about Lisbon and poetry, and her project MOID. MOID is a project of city maps in constant transformation, where you can create your personal one. She agreed to work with me, so we started a friendship.

When I had the idea to launch my fourth book, “Viajantes”(the “travelers”), it was natural to invite Marta to shoot photographs for the book. You can see more of her work here. MOID maps for Mar da Palha

My blog, Mar da Palha (Sea of Straw) is the name of the estuary of the Tagus River in front of Lisbon. The blog has constant updates with photographs and poems about Lisbon, so the blog itself is also a sensory and poetic city guide.

Obviously, it makes perfect sense that Marta and I combine ideas to create a MOID map made specifically for the Mar da Palha, which is a daily dose of small and intimate travels in this wonderful city, through poetry and photography of several authors, local and foreign.

Atlas has our own reasons for our love affair with Lisbon, but what are some of the things that made you fall so deeply in love with this city?

Well, I was born in the Chiado district of Lisbon, and since I can remember I have always felt a big attraction for the city. Only when I became an adult and started writing was I able to put this attraction on paper. In 2005, when I launched the first book As Vozes em Ti, I realized that my poems invariably focused on Lisbon by scenario or even character, and even when I tried to move away from the subject, I found it impossible.

Lisbon is truly a unique city. There is no other place like it. Yes, there are wonderful cities worldwide, but this light, these people, this landscape, this mixture — you simply don’t have it anywhere. It’s like DNA, and so it is what it is. It is so strong that it is a part of you, like an arm, a leg, a sense, and you could not recognize yourself without this part of your body or mind.

How did you publish Viajantes?

Our publisher is Livros de Ontem. They have a very interesting way of proceeding. Unlike others, they don’t ask the authors to finance the production, they invest all their time and attention in the production and promotion of the book through crowdfunding. It is a way to test the market, and the book is published only if the public wants it. In our case, it was funded in just three days and sold out in two months. This is a very rare case in Portugal, for a book of poetry, I must say.

What’s next for the book?

Our goal is to gain the interest of foreign publishers so the book can be translated into other languages. The book being in Portuguese, we are glad that our market is global because there has been significant interest in Angola and Brazil, with a considerable amount of books being sold in those countries via our online vendor.

We do have a favorite poem by Daniel Costa-Lourenço, and we have done our best to translate it from the original português below:

The antique maps have colors,
Winds, monsters and serpents, green.
Yours,
Surround your shoulder,
Play upon the poison of the lips,
Shuffle me in latitude,
Drown me in unknown corners
Where the sea falls into the void,
Where all adventurers lost ground and abyss
And found the stars.
They are the clipped points and letters that do not know
That they wash the line of your arm,
They link the cities and imagined people
In a rumor of the street
(that we haven’t seen for days because an atlas is rediscovered as
if it were another time),
In a voiceless click the trembling flesh,
Disturbing faults, gorges, scars.
The tropics are mixed in ink and Ecuador is revealed
when I surround myself
And you wrap in exhale the East of the Levante wind.
You can’t hear anyone at the ends of the earth. Only
people on the seaside