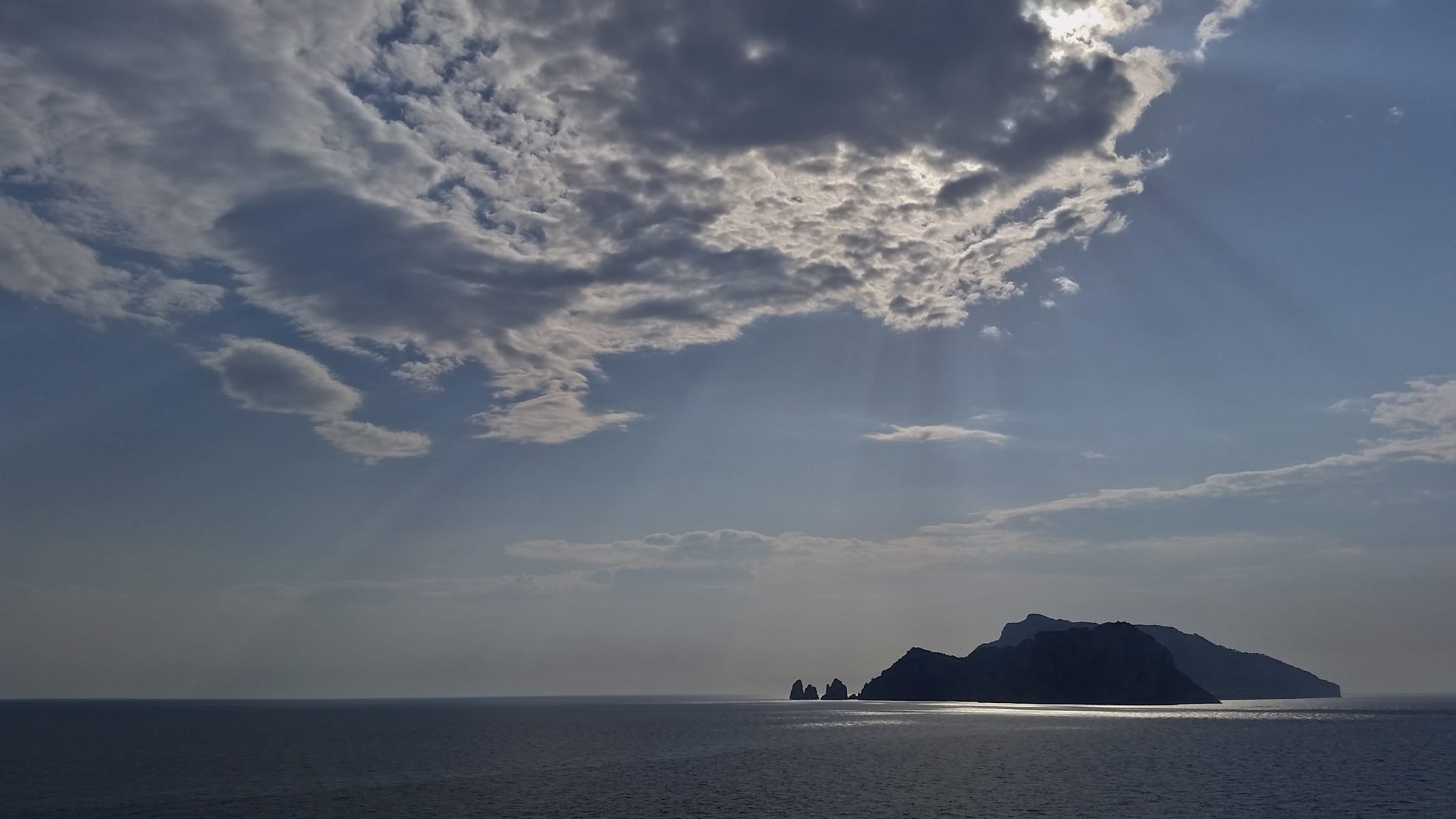 We spent a long weekend exploring the Amalfi Coast and what we found was a little slice of heaven.

The stunning coastline of the Amalfi coast offers an assortment of adventure: from climbing, to trekking, to driving the narrow cliff roads (eep!), but this overlooked paradise has more than just beaches and pizza, it’s got a fantastic history behind it. And you can get to the region from Lisbon in about three hours flying and one hour driving or by train, starting around 100€ round-trip on one of the low-cost airlines.

Situated near Naples, Capri, and Pompeii, there is a lot to explore around the Amalfi coast, so renting a car is advised to get it all done, though you’ll need balls of steel and a bit of panache to fit in with the Italian death-wish style of driving. You have been warned. You can also get around by train and bus everywhere we mention below.

The coastal region gets its name from the nymph Amalfi who stole the heart of the god Hercules (not literally, just to clarify). When she died prematurely, it broke his heart, so he honored his beloved by burying her in the most beautiful place in the world: where the sea, the sky, and nature meet. Well done, Hercules.

Atlas spent a long weekend exploring this gem and what we found was a little slice of heaven.

We arrived in Naples in the late afternoon, picked up our car at the airport and made it by early evening to our hotel in Vico Equense. We dined at one of the three open restaurants, Ristorante Mustafa, on spectacular octopus carpaccio, and were introduced to a fantastic wine with a great name to boot, Lacryma Christi de Vesuvio (Tears of Christ from Vesuvius). Not bad for a first night!

Capri is accessible by ferry from Sorrento, which in turn is accessible by train or bus from wherever you are staying in Amalfi. The Circumvesuviana Line runs pretty regularly all along the coast starting in Naples. Since we stayed in Vico Equense, a tiny town near Positano, we asked Le Axidie Hotel if we could take their complimentary shuttle service from the grounds to a nearby stop, Scrajo, where we could buy tickets (3€) and begin making our way. You can also do the route by car, but good luck on those roads — many of them should not be two-way streets, but they are anyway.

Six stops later, we were in Sorrento walking downhill to the docks. Our round-trip tickets aboard the SNAV high-speed boat were 45€ and were purchased right there in front of the boat — beware, as “tourist offices” will try to sell them to you all along the walk from the train. We only had to wait about 15 minutes until we were speeding across the Gulf of Naples toward the island that has been a resort since the time of the Roman Republic.

Once docked at the Marina Piccola, a dozen or so companies offered us boat tours of the famous Blue Grotto (Grotta Azzurra) and the limestone “sea stacks” that stick out of the sea (the Faraglioni), as well as the natural arches. These trips start at around 18€ and go up depending on how close you want to get and how much you want to see. We generally prefer to see things on foot, so we opted for a self-guided tour of the 10.4 km2 island starting at the end of the funicular’s track uphill. Unfortunately the funicular was broken, so our hiking started early.

We caught our breath with a frozen lemonade at the panoramic promenade, Piazza Umberto, and promptly began the 45-minute walk to the 27 B.C. ruins of Villa Jovis, Emperor Tiberius’ residence that had been chosen for its privacy (apparently there was a lot of debauchery going on up there) and its security. We were delighted to find that since it was the first Sunday of the month, it was free to enter, as are many other landmarks around Italy.

Wild goats roam free around the eight levels of terraced ruins on the second-highest peak of the island. Water cisterns cover the central area, along with living quarters and a small temple. Keep walking uphill to the highest point, and there you will find the Emperor’s quarters, next to a small church built in 1610, with a picturesque view of the gulf, the mainland, the island of Ischia, and Campanella Point.

Next, we decided to make a push to see the natural arch just south along the coast from the famous Grotta Bianca. This meant coming back through the center of the island and following the well-marked, narrow streets southward. The path changes from cobblestones to wooden walkways, and eventually stairs leading down to an overlook where you can see the sprawling Tyrrhenian Sea and, on a clear day, the toe of Italy’s boot.

Unfortunately for us, the oyster place we had spied between Villa Jovis and the Arch was out of oysters by the time we made our 30-minute return trip, so we escaped the drizzle that had just begun under the shelter of an umbrella in Piazza Umberto’s Bar Tiberio where we split a delicious pizza and drank red wine and a traditional negroni (or two) before stumbling back downhill to our boat ride out.

Once back in Sorrento, we realized we had blown our budget for the day. Since Italian food at restaurants is very pricey, a food shopping excursion was necessary to make up the difference. Our first stop was a wine shop called Enoteca L’Alambicco to grab a bottle of Lachryma Christi de Vesuvio, followed by a visit to a local butcher and cheese shop, Il Bocconcino, to pick up some caciocavallo and pecorino sardo cheese, prosciutto, and salami for future picnic lunches and dinner that night.

If the weather isn’t ideal for climbing or hiking, Pompeii is a good place to go because the lines are shorter and there are less people around. Keep in mind, Pompeii is HUGE, so the 11€ per person fee is actually a steal. It originally covered 170 acres (67 hectares), so you will need a minimum of half a day to see the 121-acre (49-hectar) archeological site, which is expanding a little every year. You certainly will not see everything.

The drive from our hotel was quite fast since it is accessible by interstate. We were surprised that the modern town of Pompeii is a bit meh with unimpressive pizza restaurants, grimy sex shops, and a forgettable town square, but parking was easy to find for about 4€ for a half day.

The maps at the tourist offices aren’t as good as the free ones from the park itself, here. From what we’ve read, the 10€ audio guide is skippable, so just dive in and hit the highlights from the map, and do a little exploring in between. Oh, and bring a water bottle. You can refill it at one of the ancient fountains. It’s true!

Entering the park, we quickly realized we had underestimated both the size of the site and also the impact that the ancient city would have on us. Walking the once-bustling streets later covered in molten rock, hot ash, and pumice stones of the erupting Vesuvius in 79AD was both magical and heartbreaking. Laying our feet on the streets where 1,500 bodies frozen in time had been found was enough to make the walk a silent and reverent one.

What got us talking was the incredible interiors we passed, one at a time, alerting us to the fact that we didn’t have all day and we simply had to prioritize. Planning your route through Pompeii is essential if you want to keep it to one visit.

The Path of the Gods 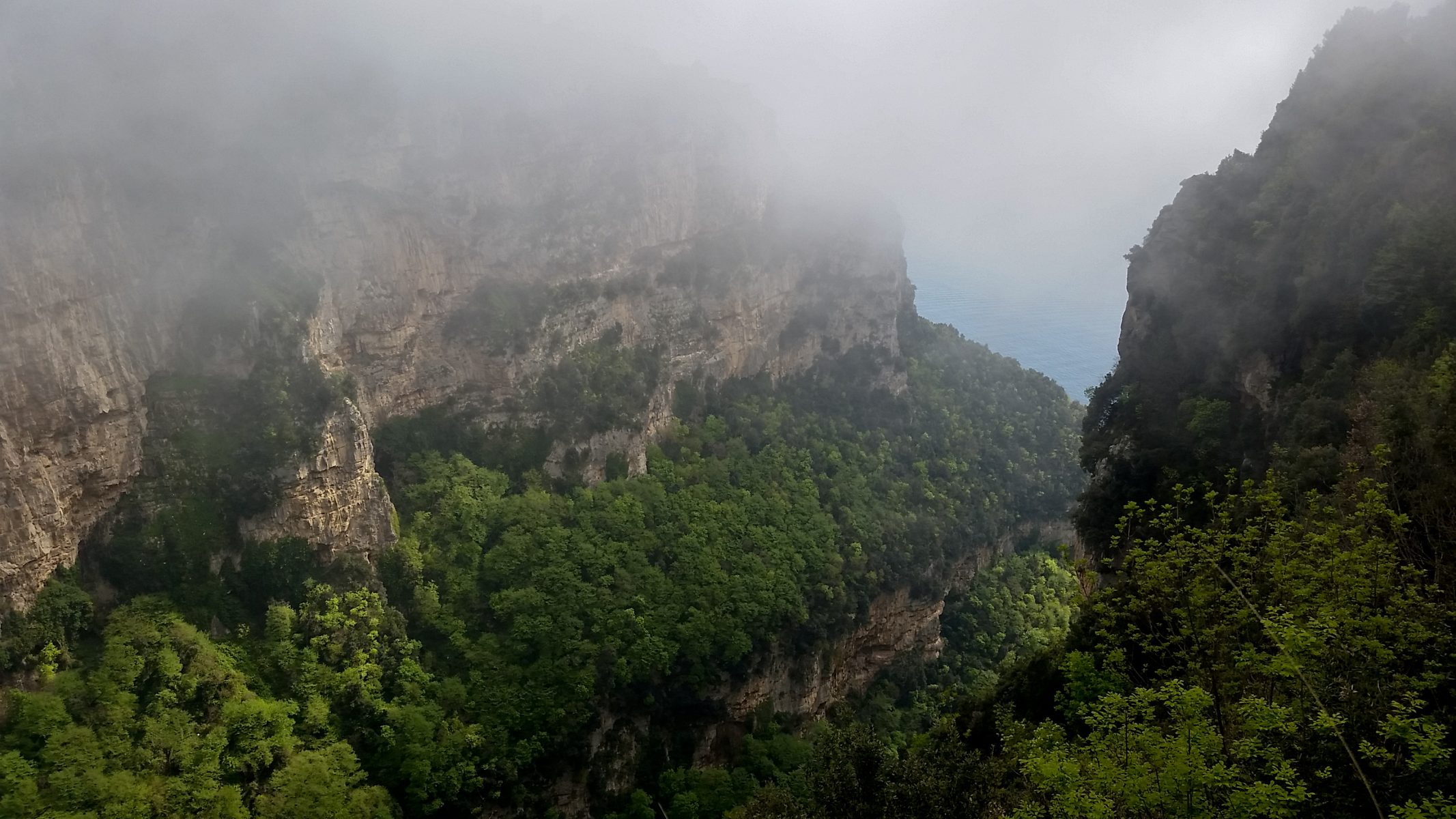 Route: Nocelle to Bomerano
Walking time (one way): about 1.5 to 3.5 hours, depending on your fitness level and photography obsession
Degree of difficulty: Easy — if you’re not afraid of heights

The famous Sentiero degli Dei (Path of the Gods) is a breathtaking mountain path with fantastic sea views that, in its entirety, takes you from the town of Bomerano to Positano in about four hours. We decided to start and finish in Nocelle, the highest neighborhood of Positano, to avoid long wait and transit times that taking the bus would have required (two to four hours). Deciding where and how to start the hike depends on where you’re staying, but for us, this was our best bet since parking in Positano is practically impossible no matter the season.

Our walk began in the morning. After a quick croissant at a friendly bakery in Nocelle, we walked up the hill for about 2 kilometers to the entrance of the path. We followed the tree-covered path to an opening where we could see the morning fog rolling in over the steep cliff faces, where a small mountain window let in a little light to the steep green slope below.

The path is a simple, well-marked one to walk and it has various viewpoints of Capri, alpinist club climbing projects, vineyards, farms, steep drop-offs, and photo-worthy openings at every turn. At a quick clip, you can do the walk in an hour (as we found out on our walk back to Nocelle) but you’ll take far more time going the first way as you ogle the scenery.

We reached the end of the walk and went off the path to the town of Agerola, where we indulged at Crazy Burger, a modest cafe run by a friendly farmer. The name might sound a bit ridiculous, but the food, though pricey, was well-prepared and fresh and we got to sample some of the local beers, which we felt were well-deserved.

Legend has it that doing this hike will keep you immune to the call of the Sirens, which are said to come from the sea around Capri. I’m not sure if it works, but we’re here to tell the tale, so we must have done something right. No one ever said anything about immunization from the call of Italy, though, which is why we are already aching to return.