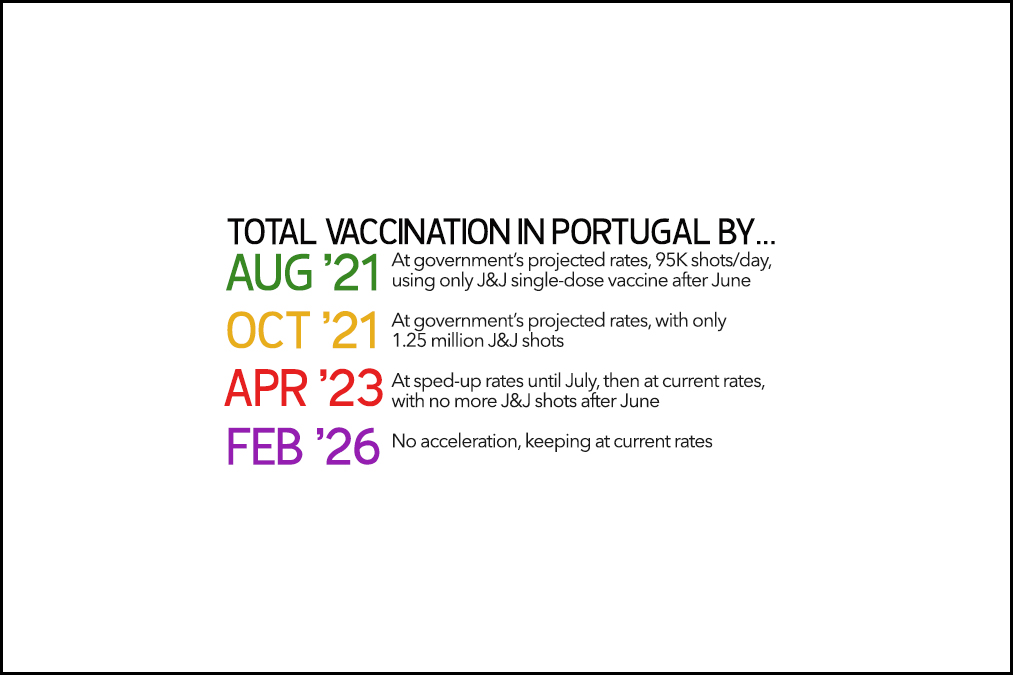 When Will I Get Vaccinated? Best Case — End of Summer, Unless You’re Priority

Despite ambitious early plans, less than 5% of the population is vaccinated and it remains to be seen whether the country can increase vaccination five-fold as it says it will in April and continue through June.

According to our back-of-the envelope math and assuming things go sort-of according to some government plan (there are discrepancies), the last person to get vaccinated (and you should assume this is YOU) will do so either at the end of August, i.e., at the end of the period most Portuguese use for their summer breaks, or at some point in late October — just in time for the flu season.

And that’s assuming two best-case scenarios. If Portugal doesn’t manage to pick up the pace as has been set out this week by the President and the head of the vaccination task force, we’re clearly looking at years and years before everyone gets a vaccine.

Things started off fabulously: the government announced in November that it would buy 22 million vaccines, enough for two doses for each member of the population — and that it would administer them to everyone for free.

The vaccine was first received in the last days of that annus horribilis, 2020, and vaccinations began Dec. 27.

The government’s plan was to administer 300,000 vaccines each week during the initial phase, which included, back then, people residing in elderly care facilities and employees there, healthcare professionals directly involved in treating patients, and people 50 and over with certain health conditions such as heart failure and chronic respiratory disease.

Needless to say, that didn’t happen. The vaccination schedule was delayed almost as soon as it was put in place.

As of March 24 — 87 days since starting vaccination — Portugal has administered 1.4 million vaccines, according to the latest numbers from Direcção-Geral de Saúde (DGS – Directorate-General of Health). That works out to an average of around 16,100 per day, or around 113,000 vaccines per week — a little over a third of what was planned.

Only slightly more than 457,000 people have received both doses and are fully vaccinated, which is around 4.5% of the estimated 10.3 million people living in Portugal in 2019, the latest population data available from the country’s National Statistics Institute.

But the government has ambitious plans, despite the creaky rollout (and the people skipping lines).

On March 21, state advisor Luís Marques Mendes said that over the next two weekends, the government wants to vaccinate 200,000 people. He also said that Portugal is set to receive 1.25 million doses of the Johnson & Johnson vaccine, which only requires one dose instead of two.

But that total isn’t expected to reach Portugal until June.

Portuguese President Marcelo Rebelo de Sousa, meanwhile, told journalists on March 23 that the supply of vaccines “has not gone well.”

“There was no production and delivery capacity corresponding to what had been contracted,” he said, without naming names, according to Lusa.

But the President added that the “fundamental goal” is to vaccinate around 70% of the Portuguese population by late August or early September.

For that, the pace will need to pick up. Whether it will is unclear.

Also on Tuesday, Vice Admiral Gouveia e Melo, the head of the vaccination task force (who wears fatigues for press conferences), also mentioned that magic number, 70% — with a caveat: the vice admiral said that 70% would get at least the first dose, rather than be fully vaccinated as Marcelo said, by late August or early September.

Gouveia e Melo also said that the country has so far received just 1.7 million vaccines destined for mainland Portugal, and another 95,000 went to the islands. Remember that Portugal contracted for 22 million.

But the vice admiral one-upped the state advisor, saying that 277,000 vaccines will be administered this week, with plans to vaccinate 28% of school staff by the end of the week, according to Público.

Presumably, none of those teachers will forget to show up for the injection: Gouveia e Melo said that 63,000 of the doses being administered this week are from AstraZeneca, which stirred up controversy because of dubious links to blood clotting and death.

As for the more long-term, Gouveia e Melo said that Portugal will administer 60,000 vaccines per day in April, and then more than 100,000 per day in May and June, with the average working out to be around 95,000 vaccinations per day — which the vice admiral called “a very high number,” according to Lusa.

It is, but it also leaves some questions.

Namely: at the sped-up rates, about half, or more, of the population will be fully vaccinated by the end of June — and the whole population by some point between the end of August and late October.

But if we maintain our average current rate, we’re looking at five years, give or take.

Here is the math, if you must:

95,000 average for the rest of March and all of April, May and June, or 3+30+31+30 days, which is 8.9 million more doses, which, with the 1.4 million who’ve received the first dose, works out to 10.6 million doses by the end of June — or the equivalent of more than one dose per person in Portugal. That means that, if all goes according to the military man, by the end of June, more than half of the population, at the least, should be fully vaccinated — remember that the Johnson & Johnson variety only requires one dose, and we’re supposed to receive 1.25 million by June.

Let’s consider a more straightforward, if unlikely, scenario: through June, the government focuses on full vaccinations instead of one dose per person.

People waiting for a second dose: 1.4 million vaccinations – 457K who already got both shots = 0.94 million

Of which 0.94 million will go to those currently awaiting the second dose, leaving 6.71 million doses.

Let’s presume these remaining ones are administered at a rate of two doses per person, for a total of 3.35 million people.

Combine that with the 1.25 million people who will have received the single-dose J&J version, and the 457,000 vaccinated as of March 25, and you should have about 5.1 million people fully vaccinated, or a little under 50% of the population, by the end of June.

Hitting the 70% by Late August/Early September

What will it take, as the President said is the plan, to fully vaccinate 70% by early September — say, Sept. 5?

Even if none are J&J and we need to administer the two-shot varieties, it’s still only 62,000 vaccinations per day in July, August, and the first few days of September, or two-thirds of the average the government plans to administer from now until the end of June.

Moonshot: Everything Goes According to Plan

Best-case scenario (because we here at Atlas are known to be optimists, ask anyone): we continue vaccinating at an average clip of 95,000 shots per day after June. If it’s all J&J shots, we’ll need to give one each to 5.2 million people, which will take 5.2 million/95,000=55 days or thereabouts, which means all of us will be vaccinated right before the August holidays are over!

If none of the shots after June are J&J, and we’ll be administering two shots to everyone after that, we’ll need 110 days, which means we’ll be vaccinating until late October.

If we don’t manage to accelerate vaccinations this month, and, say, the J&J doesn’t come through? If it took 87 days to fully vaccinate 4.5% of the population, we’ll need roughly 21 times as many days to vaccinate the rest. Or a bit more than 1,800 days more, which takes us into 2026.