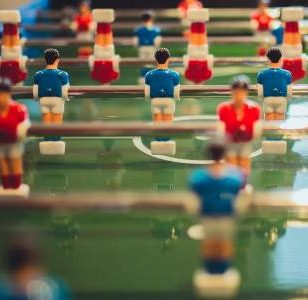 Gaming in Lisbon: Where to Play

Lisbon has its fair share of places to party, but what about places to just…play? We have gathered all the bars, restaurants, and gaming centers we could find and organized them into a handy dandy list (and map!) so you can eat, drink, and satiate even your more competitive cravings. Now get out there, bring your a-game, and make us proud.

There are several bars around town that carry the odd board game. Try Cerveteca in Príncipe Real for a round of Scrabble (in Portuguese) and an IPA, or Mez Cais in Cais do Sodré for Trivial Pursuit and the best margaritas this side of the Atlantic. If you’re feeling adventurous, it’s worth a trip across the Tejo to Cha d’Historia in Cacilhas. They have the largest selection of board and card games to choose from, and a sizable menu of over 30 tostas and crepes to keep you rolling. Choose between Monopoly and Risk if you’re in for the long haul, or just pick up a box of Trivial Pursuit cards for a conversation starter. Scrabble, Clue, backgammon, chess, and Othello can be found in the shelves as well, and if they don’t have whatever game you are looking for, you’re welcome to bring your own.

Though it’s not technically legal to allow cards in bars, Wanli somehow gets around it by offering a well-used deck tucked away in a bookcase filled with other vintage games like tabletop basketball and the like. This lounge feels more like your favorite grandmother’s living room than it does a bar, so make yourself at home and grab a slice of homemade chocolate cake while you deal out the deck. Save your bets for either of the two nearby casinos: Casino Estoril or Casino Lisboa, because this is a cash-only bar and you’ll need to save your euros.

Aquele Lugar Que Não Existe (literally, That Place That Doesn’t Exist) sits inside a signless converted warehouse space marked by a very blue door. Inside, you’l find an open-plan pizza-and-billiards paradise with couches for cocktails, intimate corner tables for the anti-social, and three free custom-built snooker tables for those who come to play. The kitchen dishes out fire-kissed pizzas with strange yet wonderful topping options: you won’t see any boring old pepperoni here. If you’ve made the mistake of eating before you arrived, fear not. Pick your poison from a well-curated wine and cocktails list and play a few rounds of pool, on the house. If you’re in the habit of paying to play, we recommend Foxtrot in Príncipe Real, though they only have one table and you pay by the hour.

Tabernáculo by Hernâni Miguel in Cais do Sodré has only one machine, but it’s a doozy. Come play Star Wars in its authentic ’70s set-up and bring a lot of moedas. Get your fill of shooting balls against flashing discs, underneath the R2D2, and into the floating Death Star, and when you run out of change, ask to see the backroom wine cellar to find your inner Jedi. The wine selection is excellent and the lounge-like space is comfortable for groups both large and small.

Just open in Santos is the new home of Galateria Davvero where, aside from delicioud handmade gelato, you can find the poinball machine, The Creature from the Black Lagoon standing at the ready in the corner. Ice cream AND pinball? It’s a dream come true.

Quintal may not have the best foosball on the planet (actually, it has one of the worst if you’re playing for the blue team — we recommend switching sides halfway through to make it fair, or better yet, don’t tell your opponent), but the setting and the vibe make the table-tilt dis/advantage a welcomed obstacle. Where else can you play the game while an audience of ducks and chickens cheer you on? You read that right. On a roof-top patio, this bar offers a small farm, late-night closing hours, cheap beer, and ample space for even the largest crowds.

Deja Vu Coffee House has two dart boards, as well as pool tables, a WWF pinball machine, a foosball table, big-screen TVs usually showing the game, and quiz nights when no one cares who is playing. Their tostas are surprisingly on point as well (try the chicken pesto!) if you need to re-fuel before your next throw. If you’re a non-smoker, it can be a bit pungent when it gets packed. The good news is, you aren’t allowed to smoke in the game room.

Bowling City in Colombo Shopping Mall is the largest place to get your strike on, with its 12 lanes and a shoe rental shop “guaranteed” to have your size. You can roll for between €3,60 and €4 per round, with discounted additional rounds on the weekdays. If you’re not feeling your inner Lebowski, they also have an arcade downstairs with four-player air hockey, the infamous claw game, and foosball galore. Oh — they have a full bar, too.

GTC Lisboa Autódromo Virtual in Telheiras offers 12 virtual racetrack simulators in comfy (vibrating) seats to let you see and feel what it’s like to be a racecar driver taking turns at top speed. You can sit in the driver’s seat for a half hour for 6€. Discounts for members are also available if you get all revved up and decide to compete.

Xtreme Games uses the same technology used to train the U.S. Special Forces. If you’re over 18, you can feel the shock of being tagged by legit-looking replicas of USSF weaponry. Do your best special op in a battlefield scenario consisting of an urban labyrinth and a forest area. Not hot on being shot? These guys also offer Playstation, X-Box, and Nintendo games in their lounge if you want to sit this battle out.

1Up Gaming Lounge is located just south of the Ocenário. It offers gaming areas replete with video game consoles, from the original Nintendo to more modern systems. They serve beer, mixed drinks (the Metroid with its peach liquor and rum combo might make you lose a life or two) and munchies like the Sonic the hotdog.

You’ll have to take the ferry across the Tejo to get here, but oh boy is it worth it. Meta, or, officially, Meta de Diversões Públicas, is one of the last bastions of the arcade gaming craze of the ’80s. It has been a fixture in Costa da Caparica since it opened over 50 years ago. It has no website, no online presence of any sort aside from generations of old-school gamers who remember the current owner, José dos Santos and his father (of the same name) operating the family business, changing coins, and maintaining the arcade. If you’re in Caparica, it’s well worth stopping in for a blast from the past. It will be 50 céntimos well spent…if you can stop yourself from visiting another of their almost uncountable machines.

And finally, if you like to mostly use your brain and not your hands, O’Gillin’s hosts quiz nights in English on Sundays, and Apple House has a bilingual championship-scale quiz night ever other Monday. Looking for something more traditional and preferably outside? Read our post about classic Portuguese games.