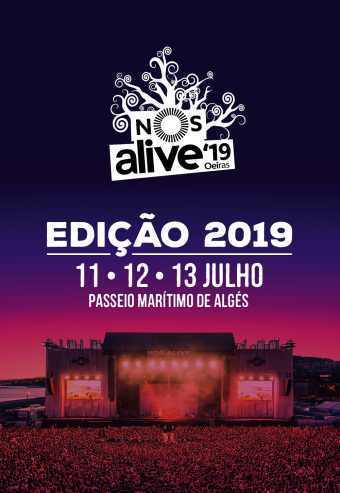 Looking Into the Lineup: Who to See at NOS Alive 2019

We’ve identified some fresh gems and can’t-miss classics in the lineup for three jam-packed days of music in this year's NOS Alive. You're welcome.

NOS Alive 2019 is here! The rock-heavy festival will host three jam-packed days of music in Oeiras, which is close enough that you can stay in Lisbon and still easily commute to the event (but you also have the option to camp, if you’re up for an adventure). It’s got big headliners that are, for the most part, bands and artists who are long-established and, one might argue, long past their peak. The top billings belong almost exclusively to men-we’ve-heard-quite-enough-from over the last few decades, like Bon Iver, the Cure, Smashing Pumpkins, Thom Yorke, Weezer, and the Chemical Brothers, to name a few. You probably know what they sound like, yeah?

So we’ve identified some fresh gems (and some can’t-miss classics) in the lineup that will satisfy your craving for new sounds.

If you don’t have tickets yet, you can still grab them here!

The 22-year old English singer-songwriter is just coming off a tour with her soul-sister Kali Uchis and is primed to bring her soulful r&b sounds to the stage. Melt with the sound of Jorja’s voice as she sings about love, heartbreak, and feeling low.

For now, float away on Jorja’s cover of Kendrick Lamar’s All The Stars.

ALL HAIL ROBYN! There’s no explanation necessary here; suffice to say that if the Swedish queen of the club hits is on the stage, you should be in the audience, leaving it all on the dance floor.

How could you miss an opportunity to see one of the most famous Brazilian hip-hop artists of all time? Rapper Emicida has been called “the Jay-Z of Brazil,” (lol) and similar to HOVA, he’s got a long list of hits. Emicida’s signature sound is an ideal summer vibe.

Sharon’s sound is familiar for fans of Cat Power, St. Vincent, and even Fleetwood Mac (change my mind!). Her strain of synthy art-pop is heavily rooted in folk — it’s often upbeat and sunny, yet still manages to be somewhat sorrowful. Take a load off, her voice is one to get lost in.

This young South London rapper is one of the newer acts on the bill, and one you’ll be glad to get to know. Referred to as a prodigy by various media outlets, his songs artfully fuse jazz, poetry, and hip-hop in a similar vein to Tom Misch — who he’s collaborated with in the past — to create a warm sound that has a sharp edge.

Kojey Radical is a British rapper of Ghanian descent with a grime-y sound and socially-conscious lyrics who feels as if he’s of the same family as Stormzy. It’s groovy, it’s woke, and it’s really fuckin’ good.

This psych-punk, surf rock, noise-pop duo from Porto is easily one of my favorite discoveries in this year’s lineup — their spastic, energetic, irreverent vibe is exactly what your summer needs.

Samm’s music is upbeat, soulful, and jazzy, adjacent to Leon Bridges — who he’s worked with, along with Pharrell and others — but much more akin to hip-hop. It’s gospel hip-hop, so get yourself to church.

When it comes to body positivity and self-love, before Lizzo, there was Beth Ditto. Beth is the sparkly, sultry, high-energy frontwoman of Gossip, an American disco-punk band that has been on hiatus since 2012 and is coming back just to make you sweat.

Tash is a 23-year-old self-taught one-person band from Melbourne who can play literally 20 instruments. Their incredible talent, free-spirit vibe, and creative, psychedelic reggae-rock sound (only an Australian, amirite?) make for a uniquely enchanting experience.

This group of Spanish bros has an energetic, indie-rock-meets-jam-band sound, a hot lead singer with a powerful voice, and a new-ish album to promote. Check ’em out!

Do. Not. Miss. Carla. Prata. The super-talented 19-year old r&b artist spent her upbringing between London, Lisbon, and Angola and is now based in Portugal, where she’s become a breakout voice while writing and recording music that she says she wants the whole world to hear.

Join me in adding A Malta Brilha to your poolside playlist.

Johnny Marr’s still got it, y’all! Just this past weekend at Glastonbury, he popped onstage with The Killers to perform a rendition of “This Charming Man,” and goddamnit, it was delightful as ever. Catch Johnny if you can for a good, old-fashioned British rock’n roll of a time.

Often compared to Led Zeppelin (and as such, the subject of many forum debates), Greta Van Fleet’s sound is a welcome throwback. The rock quartet is reviving the quintessential sounds and screams of the ’70s that we didn’t even know we needed, and a lot of people are glad it’s back.

Grace Jones doesn’t give a fuck. The iconic supermodel, recording artist, and queen of the club is absolutely unstoppable at 71-ish years old, and if you haven’t had a chance to catch her live with her hula hoop, you should take it. It’s campy, it’s flamboyant, and it hasn’t lost a single bit of energy — or significance — over the decades.

Holy shit, did you know about this?! Chong Kwong is your new favorite rapper. She brings together a background from China, Cape Verde, Mozambique, and Timor, and her flow is literally fire. Plus, when asked about her music, she says things like, “I don’t consume genres, I consume vibes.” Same, girl.

Hit play on this banger immediately, and do not miss this show!

The Gift is a long-running Portuguese alt-rock band with a dreamy, synthy, ’80s sort of sound. Lead vocalist Sónia Tavares is a sophisticated, commanding presence, as evidenced by the below clip in which the band absolutely takes down Coliseu dos Recreios in Lisbon.

Formerly known as Marina and the Diamonds, MARINA is a shimmering queen of pop whom you might not have heard of — she’s a little like Carly Rae Jepsen, but more British. Her signature palette is neon, her performances almost always include pom-poms, and the range of her voice will slay you.

Get in the mood.

Nova Materia is a French-Chilean weirdo rock-electronica duo that makes truly creative music based not only on the traditional tools of electronic sounds, but by using materials like metals and rocks to build danceable rhythms. You have to see that, right?

The Blaze are a French electronic duo that specialize in blending their experience as film directors with their prowess for electronic music production. The result is a multi-media dancefloor journey driven by pulsing tracks that’ll make you wanna move.

See you on the Westside!