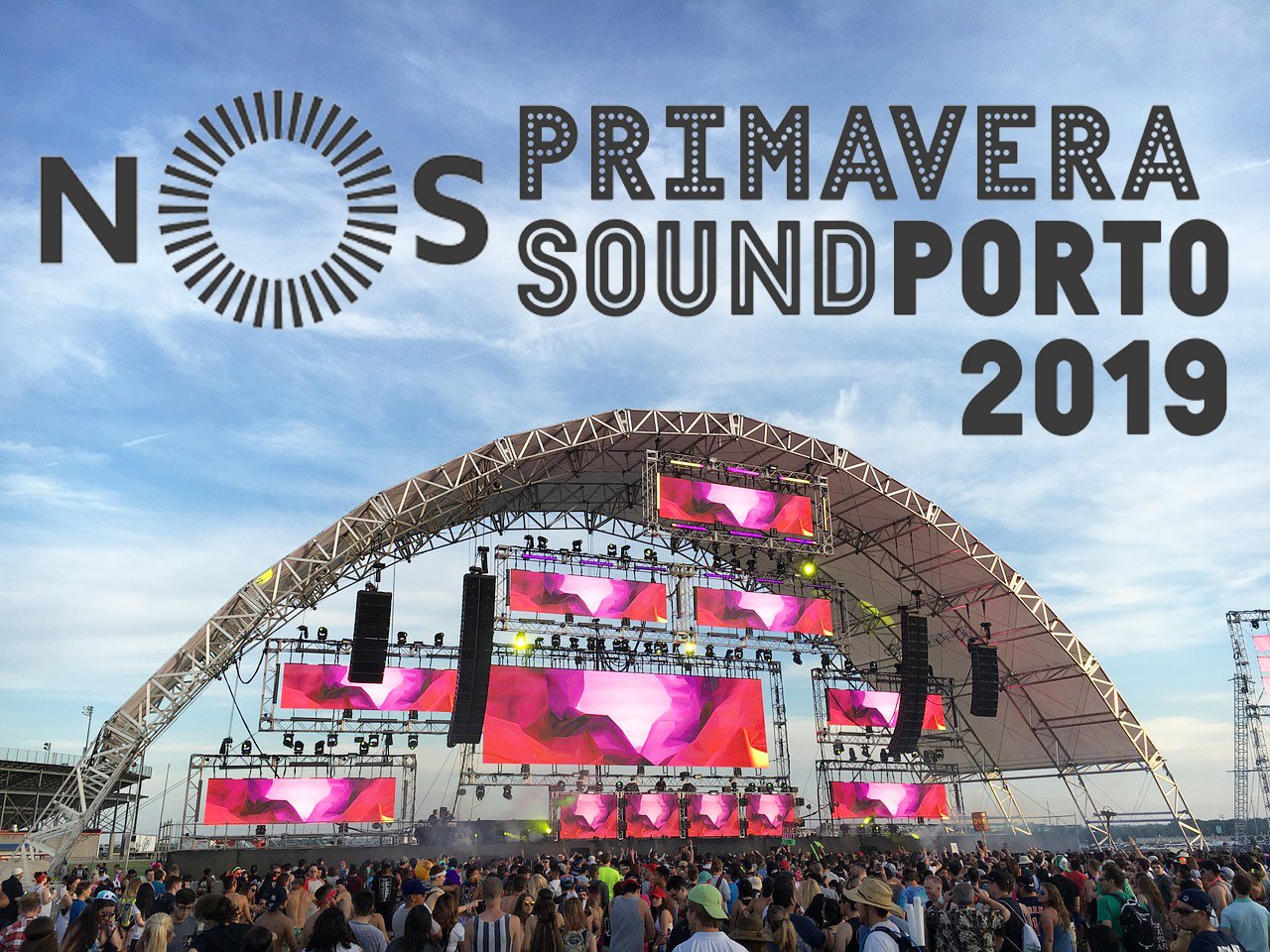 Who to See at NOS Primavera Sound 2019

When it comes to deciding which shows to attend this year, where do you begin? Don’t worry, we got you — we listened to every artist in the lineup, so you don’t have to.

Festival season in Portugal has officially (okay, almost) begun: NOS Primavera Sound is here! From June 6-8, a diverse roster of musicians will descend on Porto to help us all welcome back the most wonderful time of the year. Solange, Stereolab, J Balvin, Interpol, Erykah Badu, Rosalía, and Nina Kraviz will headline the three-day event, but there are sixty-six (!!!) other acts in the lineup. Much of the talent is either niche and/or emerging — which is dope, obviously — but when it comes to deciding which shows to attend, where do you begin?

Don’t worry, we got you — we listened to every artist in the lineup to uncover the hidden gems. Overall, true to the Primavera Sound brand, expect a high-energy electronic, rock, and pop-fueled dance party, with r&b and hip-hop infused throughout. More than that, expect a genre-blending, category-defying display of creativity that highlights artists who will make you excited to be a music fan.

Read on for our top picks for which artists to see each day, get your tickets, and download the NOS Primavera Sound app to stack your schedule.

Dino d’Santiago
17h, Super Bock Stage
There’s no better way to kick off a music festival in Portugal than by being welcomed into the world of Dino d’Santiago, the Afro-Portuguese artist who brings music and dance genres like funaná and batuku together with electronic beats to form a singular, powerful, distinctly Lusophonic sound. Dino’s passionate vocals and electric energy will stick with you all weekend long. Read our interview with the man here.

Danny Brown
22h20, NOS Stage
One of the few rappers on the bill, weirdo American hip-hop artist Danny Brown will bring a high-energy taste of Detroit and arsenal of certified bangers to Porto.

Nilüfer Yanya
18h50, Super Bock Stage
This young Londoner produces adventurous pop-rock that is also soulful, jazzy, and indie, reminiscent of the darling Mitski and occasionally featuring a saxophonist! I’m a sucker for a sax, y’all.

Nubya Garcia
19h, Pull & Bear Stage
London-based saxophonist and composer and DJ Nubya Garcia is heralded as a leader in the UK’s jazz resurgence, building on that influence and adding to it a unique strain of the Afro-Caribbean sounds of her roots. Great opportunity to have a seat, smoke a spliff, and ease into the weekend.

Sons of Kemet XL
20h20, Pull & Bear Stage
Settle in to watch the sunset with Sons of Kemet (the XL suffix refers to a few additional band members to be added for the performance) as they play you a sound that’s both rooted in pure jazz and at the same time far beyond its origins. Sons of Kemet is a political, UK-based modern jazz supergroup that incorporates Afrobeat, dub, Caribbean soca, and grime. This isn’t slow, sleepy jazz — this is turbo-jazz, and you’re gonna wanna dance.

Mura Masa
20h50, Seat Stage
The producer from South London, whom you probably know by his collaboration with A$AP Rocky, plays across the spectrum of electronic music, incorporating hip-hop and dance to create seemingly endless hits. He’s collaborated with Desiigner, Christine and the Queens, and NAO, to name a few, and you never know who he’ll bring on stage to join him. We can’t wait to find out.

David August
23h30, Pull & Bear Stage
David August is an electronic DJ with an oft-cited background in piano, but honestly, I’m not sure what that has to do with anything. However, his Boiler Room set has 8 million views, and his sound has a dreamy energy that I’m looking forward to dancing along to under the stars.

Kali Uchis
23h40, Super Rock Stage
Isolation, Colombian-American Kali Uchis’ 2018’s full-length debut, was one of the best albums of the year — a performance by the bilingual, bicultural, r&b and pop queen, who has collaborated with Jorja Smith, Tyler the Creator, Daniel Caesar, and Vince Staples, to name a few, is not to be missed.

Here’s a taste via A COLORS SHOW, in which her voice almost seems to capture the spirit of the late, great Amy Winehouse. I’m not crying, you’re crying!

JPEGMAFIA
01h, Pull & Bear Stage
Otherwise known as Peggy, JPEGMAFIA is full of righteous rage. He performs dark, aggressive raps that are so subversive he’s almost punk, yet has also been categorized as emo — and somehow all observations are accurate. His stage presence is energetic and irreverent, his lyrics violent, vulgar, and driven by hatred — mostly for the alt-right. Peggy’s got layers, and he’s also got a point.

SOPHIE
02h30, Pull & Bear Stage
If you’re into deeply-emotional electronica, well, first of all: cool! Secondly, I want to introduce you to SOPHIE. She’s campy, she’s extra, she’s a force. The fiery-haired, eclectic, almost spooky music producer is noted to have spent time in the studio with both Madonna and Charlie XCX, and a 2018 performance in Los Angeles was reviewed to be “an uncanny cabaret.” Footage doesn’t really exist for the ever-evolving SOPHIE of late, so you’ll just have to experience the neo-pop star for yourself.

Viagra Boys
18h, Palco Stage
The most important thing to be noted about Viagra Boys is actually not about their music. “Men are basically the root of all problems,” their bassist was quoted as saying in FADER, and really, what else is there to say? JK, they’re cool. The Boys are actually a Swedish post-punk band from Stockholm that had the foresight to incorporate a saxophone, and they’re pretty fun to listen to. We’re on board!

Amyl and the Sniffers
21h, Super Bock Stage
Amyl and the Sniffers is a punk band in the purest sense, influenced by a foundation of ’70s and ’80s rock and fueled by an authentic, spirited angst. When it comes to the type of show she likes to put on, frontwoman Amy says she was was largely inspired by the hardcore shows she attended in her youth: “I love the rowdiness, the energy, the sweat, and the consensual violence. I love that chaos,” she says. Hell yeah, Amy!

Tirzah
22h Pull & Bear Stage
If you’d like to get lost in something, or maybe you already are, just follow the sound of English singer/songwriter Tirzah’s voice. Her show promises to be a lo-fi, free-form, anti-pop dance experience, rooted in experimental r&b and centered around her love-struck debut LP, Devotion.

Rosalía
22h10, NOS Stage
I probably don’t have to tell you not to miss Rosalía, right? Our Latina queen is one of the artists who matters most at this moment on a global level, spreading her enchanting voice over catchy electronic beats with a distinctly Spanish essence. Though it is flamenco at its core, Rosalía’s revival fuses r&b, pop, and electronica to create a sensual, infectious sound.

Neneh Cherry
22h30, Pull & Bear Stage
Oh my god, Neneh Cherry! This Swedish songstress has been blending jazz and pop with house, trip-hop, and spoken word for 30 years, and has collaborated with everyone from Peter Gabriel to MF Doom to Gorillaz. Her message is political, one of war and peace and defamation of anti-abortionists and pro-gun groups, and her sound is both energizing and enchanting.

Peep this live show — there’s a fucking harp on the stage!

Kate Tempest
22h30, Seat Stage
The understated Kate Tempest is a British spoken word performer, a decorated poet, a recording artist, novelist, and playwright. Holy shit! However, in addition to that, she is an absolute fire rapper whose lyrics lately include railing on Brexit and other relevant modern tragedies. She is not only eloquent, as her accolades as a poet suggest: Kate and her band will also make you want to dance — despite the fact the world is burning.

mad miran
00h, Primavera Bits Stage
Netherlands-based DJ Miran Belhanafi, otherwise known as mad miran, is just like you. She found her way into electronic music through partying in Amsterdam and now finds her way as a DJ by experimentally, adventurously blending techno, electro, and trip-hop, among other things she finds in her local record shop. Miran’s is a truly out-there sound that feels endemic to the clubs of Rotterdam, her current home. Let’s get weird with Miran!

Mykki Blanco
02h30, Pull & Bear Stage
Mykki is rap, pop, trap, neo-soul and more, but above all, he is raw, electrifying, and unpredictable. Opportunities to catch him are rare, so don’t miss this one.

Peep his small-venue show below to get hyped for a wild ride.

Nina Kraviz
04h, Primavera Bits Stage
Okay, so, Nina Kraviz can throw a party. We all know that, right? If you’re still alive by 04h on *literally Sunday,* do the damn thing.

Here she is throwing a party underneath the Eiffel Tower. We get it, Nina!

Honestly, the only thing I can think about at this point is the fact that Lizzo canceled her initially-announced appearance at this festival and no matter what, we all have to live with that.

Get your tickets here (and support Atlas!).

Atlas receives a small commission from some ticket sales, at no additional cost to you — and frequently with a discount, in fact;)