Like the Essenes of times gone past, digital nomads shall shun the trappings of modern city living. Instead, choosing to spend their time in the mountains for periods of quiet self-reflection. Or, you know, group chats on Slack.

As you walk through the crowded streets of not-even-summertime Lisbon, you may notice an ever-increasing number of co-works, nomad-friendly cafes, and even a few opportunities to do your laundry with your laptop. For many, this is a hellscape. One that was escaped by strapping on some hiking boots and heading to the mountains. And, despite “adventure sports” rise in popularity, the great outdoors has generally been large enough to accommodate even the most antisocial among us.

Not anymore! Introducing, free coworking spaces in the mountains. 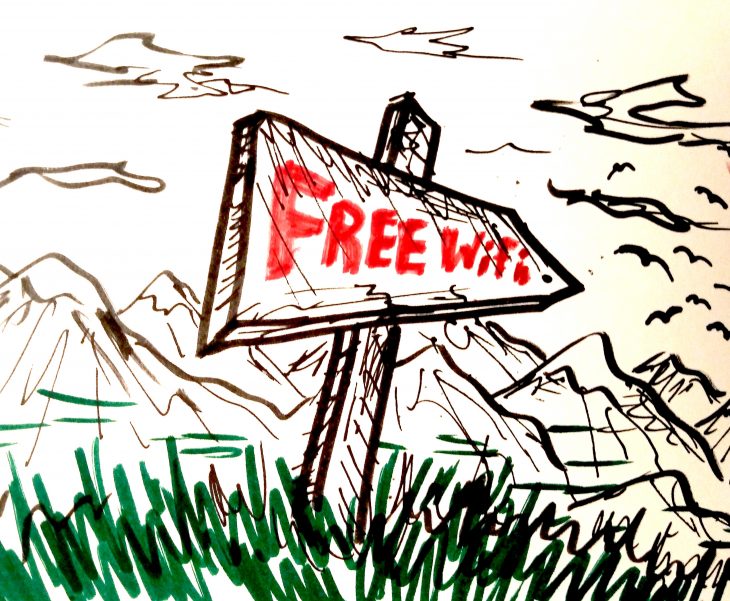 The villages of Alvoco das Várzeas, Lapa dos Dinheiros and Videmonte, all located in the Serra da Estrella region, will be opening temporary, rural co-work spaces as early as September this year. The three spaces, housed in various council-owned buildings, will include WIFI and the other tech needed by even your most modern digital nomad. Upon opening, they will be free to use, with the idea that those visiting the area can pop in to work during their stay. After a time, they will charge a nominal fee, but this is unlikely to be a significant amount.

More important than the speed of their connections, this announcement of rural coworking spaces raises a couple of rather big concerns.
First, the sudden spike in remote workers in Lisbon has no doubt contributed to the staggeringly fast rise in rent prices, the removal of traditional restaurants and cafes, and the increase in the number of places where a café costs almost 2€. Now that the capital is becoming too expensive even for the hippest of hipsters, will we see the villages and towns taken over as well?

Second, there is the more fundamental, and wholeheartedly less nationalistic, concern that this is yet another example of a society which praises never-ending work. We already receive emails, calls, messages and a stream of social media to our phones wherever we go, do we really need a dedicated office in the hills? Nature is, and almost always has been, a respite for those looking to escape the hustle and bustle of fast-paced living. If we start to move the digital-work sphere into what has traditionally been a retreat, then how do we escape? Conversely, perhaps having a place to work in the mountains will allow nature-lovers to spend longer away from the city rather than polluting the little time they do spend there? Although very few people seem to clamor for quantity over quality.

Of course, many of these concerns can raise questions themselves. The countryside is not there solely for city-dwellers to retreat in – people work in rural businesses, and they work hard. Additionally, it prompts the much broader debate of “keeping things traditional” Vs “attempting to create living museums.”

What right do we city-dwellers, with our (supposedly) highspeed internet, numerous cafes, and piles of tourist income, have to tell those who live in Portugal’s rural villages what they should or shouldn’t do? An argument further supported by the fact that this project is being spearheaded by Associação de Desenvolvimento Integrado da Rede das Aldeias de Montanha (ADIRAM) alongside the local councils. According to Francisco Rolo, president of ADIRAM, the renovation and running of the spaces will involve the local community, in line with the rather hot concept of “circular economy” … somehow. This could be a chance to rejuvenate the remote spots that have seen numbers dwindle as young people move away.

Perhaps our right is that of someone who has already made a deal with the devil and is now suffering the consequences? These villages could be victims of their own success, with co-works drawing remote employees, who in turn drive up the rents, leading to the removal of the very “locals” these rejuvenations are supposed to help. And if these places become meccas for rural-remote workers and the bubble pops? Well, then they could be left emptier than ever before.

Like many of these things, only time will tell. Perhaps the development of these free, rural coworking spaces will be great for the local economy, the villages’ residents, and those wishing to get back to nature. Or, perhaps it will lead to evictions, clog the hiking trails, and pile more anxiety than ever on a generation that never stops working.

For now, all we can say is, we’ll see you in September.

Expired COVID Certificate in Portugal? Here’s How to Renew It

The digital COVID certificates issued in Portugal originally had a six-month validity, but that was extended by three months in December. If you received your certificate more than six months

“The meeting of two eternities, the past and future….is precisely the present moment.”
Henry David Thoreau.

Good news, especially if you’re lucky enough to have a booster shot, which also means you’re old, so there.

“And now we welcome the new year. Full of things that have never been.”
Rainer Maria Rilke.

Update: Where to Get a COVID Test in Lisbon and the Rest of Portugal