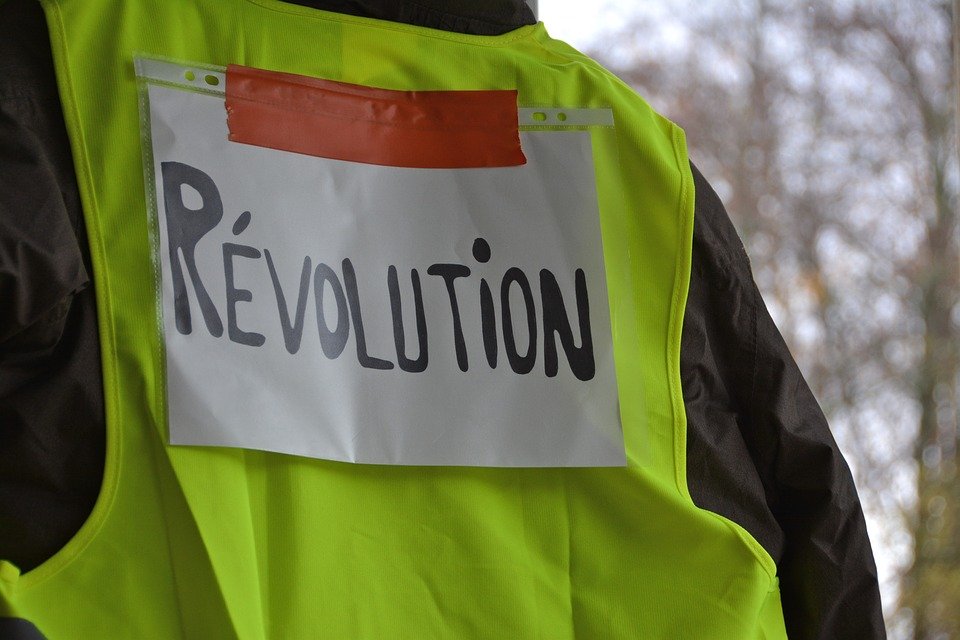 Could we see yellow jacket demonstrations on the streets of Lisbon? Some organizers in Portugal are pushing for a gilets jaunes protest on December 21.

Over the past couple of weeks, Paris has come to a standstill as the so-called Les Gilets Jaunes demonstrators (Yellow Jackets) swept through the city. The demonstrations began as a challenge to a tax increase on gas but quickly morphed into general anti-government riots that saw hundreds injured and thousands arrested.

In their initial aim, the demonstrators were successful: the proposed tax hike is getting postponed for six months. This didn’t stop the demonstrations, however, and they now seem to be spilling out into other countries, including Portugal. A number of people are trying to spark similar yellow-jacket protests with events planned for the end of next week. There is already locations set in Lisbon, Porto, Faro, Loures, and Beja for the demonstration that is due to begin at 7 am on December 21. 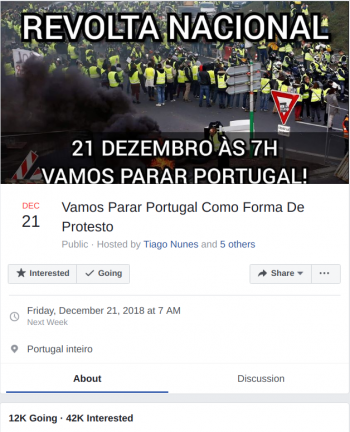 The Facebook page for the countrywide demonstration, Vamos Parar Portugal Como Forma De Protesto (Let’s Stop Portugal As A Form Of Protest), has already gathered 12,000 “attendees” and more than 42,000 people “interested.” It seems to have been organized by a group in Bombarral, Leiria, since all of the Facebook “hosts” are based there, but there is an almost constant flow of activity on the page from people all over the country, with posts enquiring about Coimbra, Bragança, Braga, and Torres Novas to name but a few. 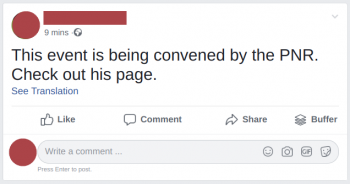 Those instigating demonstrations in Portugal may have a darker motive, however. Some individuals and anti-fascist groups claim that the demonstrations could be connected to far-right groups. The countrywide page is organized by Revolta Nacional, and the Porto event by Movimento Amilar Lusitano, which are both allegedly support groups for Partido Nacional Renovador, a far-right nationalist party. Furthermore, PNR is openly promoting the planned action on their Facebook page, which people have started to point out on the Vamos Parar Portugal Como Forma De Protesto event. [The antifascist group’s Facebook page and the claims on it have since been removed].

This far-right agenda is seen in many of the posts on the site, with members sharing anti-immigration videos, “Tudo pela nação, nada contra a nação!” (always for the nation, never against the nation), a well-known Salazar quote, and propaganda from other European populist parties such as Five Star Movement in Italy. This could, of course, be the work of so-called trolls or a minority, but it is hard to tell what is serious, what is satire, and what is meant to discredit those organizing the demonstration. 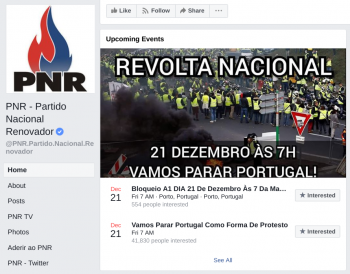 One of the Facebook-organisers, Tiago Nunes, explicitly states that they “do not want any disrespect, xenophobia, racism” nor “paints, guns, fire, etc.,” in both the description of the page and a pinned post. Nunes also outlines some of the many grievances that the demonstration is supposedly about, including fuel prices, taxes, corruption, and the minimum wage. Unfortunately, these problems are where many right-wing populist parties in Europe have gained traction, addressing core issues (or purporting to) and gaining the support of those who are most affected.

Worryingly, the yellow-jacket situation in Portugal is being exacerbated by sites such as Bombeiros24. This site, and others like it, have been flagged as nothing more than fake news factories, pumping out fabricated stories on crimes that never happened. These for-profit sites mainly focus on suicide, murder, and police-related stories, and the owners are anonymous — we only know that they are hosted in France. In the best-case scenario, these fake-news sites are acting as agent provocateur for the sake of profit; in the worst-case, it is yet another attempt to destabilize EU members.

It is as yet unclear what, if anything, will happen next Friday. There is a tradition in recent years of online organizing making little traction in the real world, but perhaps this will be the exception. This could be headed by the far right with only a handful of demonstrators, or be a broad-based demonstration with thousands of people.

[Edit: As of December 18, the original Facebook event seems to have been removed.]